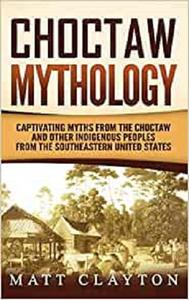 Choctaw Mythology: Captivating Myths from the Choctaw and Other Indigenous Peoples from the Southeastern United States by Matt Clayton
English | December 3, 2020 | ISBN: 1953934196 | 59 pages | EPUB | 0.47 Mb
Explore Captivating Choctaw Myths
Many southeast peoples speak languages in the Muskogean language family, and many myths and tales also have versions that are shared among tribes. Rabbit is a trickster hero in all of these cultures, while other animals common to the region, such as turkeys and alligators, make appearances as well. Thunder beings appear in tales from both the Choctaw and Natchez peoples-only the Choctaw story is presented in this volume-while the owl acts as a villain in stories from both the Choctaw and the Caddo.
The first part of this book contains Choctaw myths and legends. In this section are stories that explain Choctaw beliefs about the origin and structure of the universe and the origin of corn, an important staple food. The alligator appears here not as a villain but as a grateful recipient of human aid, while the owl is a murderous old woman. Adventurers seek new places in the Choctaw migration legend and in the story of Tashka and Walo, two boys who journey to the home of the Sun.
The second half of the book comprises stories from six other southeastern tribes: the Seminole, Natchez, Alabama, Creek, Caddo, and Chitimacha. Animal characters such as Alligator, Rabbit, and Owl play roles here, too, the first in a just-so story about the shape of the alligator's snout, the second in his usual guise as a wily trickster, and the third as a devious man who dupes two ambitious girls into becoming his wives. Journeys to the sky country are represented by the tale of the sky maidens who come down to Earth to play ball, and in the story of the gifts of Kutnahin, a solar deity of the Chitimacha people.
Within this book, you'll find the following topics covered:
Feel Free to contact me for book requests, informations or feedbacks.
Without You And Your Support We Can’t Continue
Thanks For Buying Premium From My Links For Support