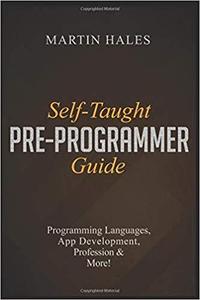 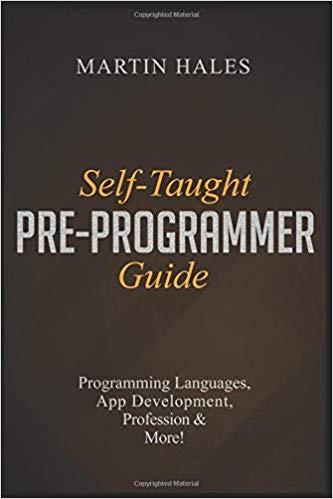 Self-Taught Pre-Programmer Guide: Learn About Programming Languages, App Development, Profession & More by Martin Hales
English | Large Print, March 23, 2019 | ISBN: 1091387710 | 197 pages | MOBI | 0.32 Mb
Hi, everyone!Welcome to my book on Pre-programming which covers everything you should know if you have been meaning to begin coding as a programmer.You might not know this, but the rate of people who try to learn programming and then quit is quite high. I’m talking more than 60% here.Now, you might ask… why is that? Is it because not everyone can get the hang of programming? Is it really so tough for those with no background in computer science to learn how to code? As far as my opinion goes, people tend to quit learning about programming is because they don’t understand the basics of technology they’re already using. The fruits of coding are around all of us; from the browsers we use to the apps on our smartphones. That is why understanding the basics is where it’s at.And yes, programming jobs have been increasing over the decade and will continue to do so. Capable programmers are known to make more than $100,000 a year!So, it’s no surprise you might wish to enter the field as well. I mean, if you play your cards right, a single game app you create can go on to make millions of dollars for you.Again, similar to the other work I have done, I have tried to convey everything in an easy manner while hopefully making the content interesting for you. This book is for:
•Anyone interested in learning how to program and don’t know where to start.
•Anyone feeling a bit intimidated by entering the programming field.
•Those wanting to be better at communicating with other coders they will be working with for a project.
•Those wanting to know about programming careers as a freelancer and a traditional hire as well as how much money you can likely make.
•Anyone interested in knowing more about how modern technology around us works.Coming to the specifics, due to what this book covers, you should be able to:
•Better understand programming fundamentals.
•Understand how computers work.
•Know what is an Operating System.
•Learn about languages you should know as a future programmer and which ones to learn.
•Know how to apply concepts of programming.
•Understand programming trends.
•Learn certain programming basics to help you better communicate with coders you might find yourself working with in the future.
•Know about the careers you can have as a freelance or traditional programmer. And more!I will start by talking about computers. You will get to learn about machine code. Then there are the tech stacks as well as front-end and back-end programming. We will talk about using WordPress, SquareSpace, and more. Of course, I will be talking about HTML, Python and other programming languages along with examples to show some popular stuff which has used certain languages and why they might be a good option for you to learn. And of course, there is an entire section to help with your career as a programmer.Again, don’t let the world of programming make you hesitant to enter. There is so much potential you can tap into as a programmer, especially if you are creative and driven.So, let’s begin!