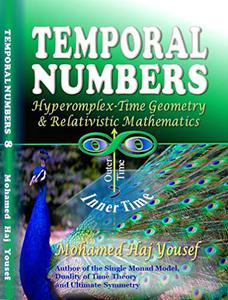 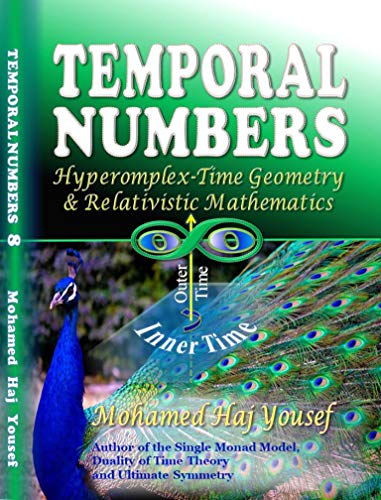 TEMPORAL NUMBERS: Hypercomplex-Time Geometry and Relativistic Mathematics by Mohamed Haj Yousef
English | 2021 | ISBN: N/A | ASIN: B086SFZ58F | 310 pages | MOBI | 3.54 Mb
One of the wondrous results of the Duality of Time Theory, which is based on the Single Monad Model of the Cosmos, is that it innovates a direct connection between the speed of light and the very dimensions of space! Therefore, the resulting creative conception of complex-time geometry will have tremendous and unfathomable consequences on the essential foundations of mathematics, that may even exceed the magnificent solutions of many major problems in physics and cosmology, in addition to reconciling between relativity and quantum mechanics, as we explained in the previous volumes.
Another momentous consequence is that space becomes finite and self-contained, without any background or extra dimensions, but it is temporally created in nested cycles that are sequentially passing through the present moment and perpetually vanishing into the past, so that each point of space is constantly becoming or coming into being for a mere instance of time that we call the present, which is all that actually exists in reality, while the future and the past are imaginary.

Another yet more astounding result of the above dynamic construction of geometry is that the space-time becomes intrinsically granular and fractal, even without the need for any minimum time or length scales or quanta, because the unit of quantization is the frequency of re-creation, or the refresh rate, which is the ratio between the inner and outer levels of times. This ratio is nothing but the speed of light itself whose normalized value also corresponds to the fractal dimensions of geometry, which then becomes genuinely hyper-complex, since both its real and imaginary parts have the same nature (of time), so we can now legitimately "count" in intersecting dimensions at the same time.

Henceforth, for the first time in history, and many centuries after their victorious introduction and successful applications on various physical systems, imaginary numbers have a genuine and more fundamental meaning that unites between physics and mathematics!