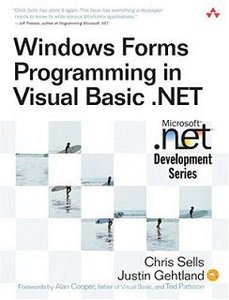 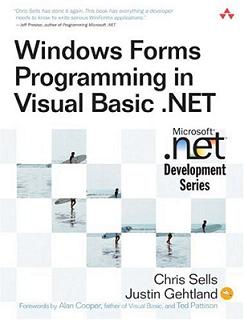 Authors Chris Sells and Justin Gehtland draw upon their WinForms research and programming experience to go beyond the Windows Forms documentation to give you a clear picture of exactly how Visual Basic .NET programmers can use WinForms. Readers will gain an understanding of the rationale behind aspects of WinForms design and learn how to avoid or solve common problems. Throughout the book, detailed illustrations of WinForms user interface features and working code samples demonstrate best practices. All code has been tested with Visual Studio .NET 1.1 and is available at www.sellsbrothers.com, where readers will also find updates to the book.

This book focuses on the topics developers need to know in order to build real-world applications, including:
*Form layout
*Multiple top-level and non-rectangular windows
*Classes outside the System.Windows.Forms namespace, including System.Drawing and System.Security
*Custom drawing
*Hosting and building controls
*Design-time integration of controls and components
*Data binding
*Multithreaded user interfaces
*Deploying WinForms controls and applications over the Web
*Moving from Visual Basic 6

Well-written and easy to navigate, Windows Forms Programming in Visual Basic .NET is the tutorial for Windows programmers who are serious about mastering Windows Forms

Visit my blog on AvaxHome for more books