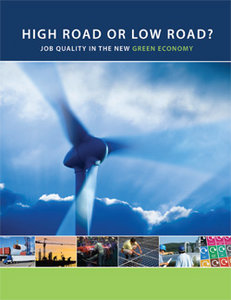 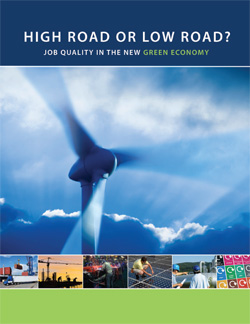 High Road or Low Road, Job Quality in the New Green Economy (2009)
Philip Mattera | Good Jobs First | February 2009 | 46 Pgs | PDF | 1 MB
There is a significant ray of hope amid the current economic gloom: it goes by the name of green jobs. After several years of calls by advocacy groups for major public investments in a clean-energy revolution, the federal government now appears ready to include large sums for projects involving renewable energy, mass transit, energy efficiency and modernization of the nation’s electrical grid in the massive economic recovery and reinvestment plan being devised by Congress.

Green jobs are not just a short-term fix for the recession. Increasingly, these jobs are understood as central to the future of our nation and our planet.The shift to a green economy creates an unparalleled opportunity to address not only unemployment and the climate crisis but also deeply rooted social problems such as poverty and inequality.