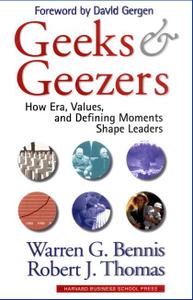 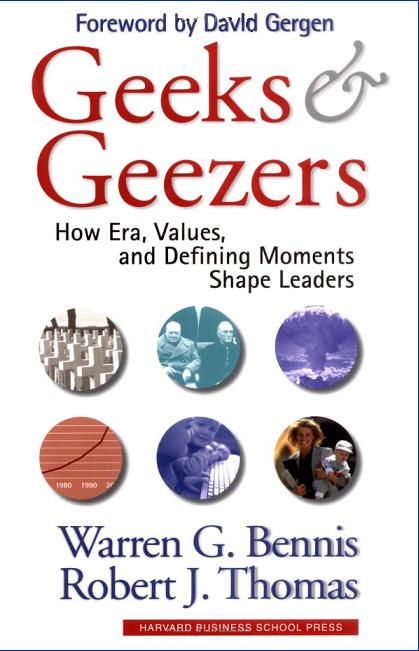 Book Description
Today's young leaders grew up in the glow of television and computers; the leaders of their grandparents' generation in the shadow of the Depression and World War II. In a groundbreaking study of these two disparate groups-affectionately labeled "geeks" and "geezers"-legendary leadership expert Warren Bennis and leadership consultant Robert Thomas set out to find out how era and values shape those who lead. What they discovered was something far more profound: the powerful process through which leaders of any era emerge. Geeks and Geezers is a book that will forever change how we view not just leadership-but the very way we learn and ultimately live our lives. It presents for the first time a compelling new model that predicts who is likely to become-and remain-a leader, and why. At the heart of this model are what the authors call "crucibles"-utterly transforming periods of testing from which one can emerge either hopelessly broken, or powerfully emboldened to learn and to lead. Whether losing an election or burying a child, learning from a mentor or mastering a martial art, crucibles are turning points: defining events that force us to decide who we are and what we are capable of. Through the candid and often deeply moving crucibles of pioneering journalist Mike Wallace to new economy entrepreneur Michael Klein, from New York Stock Exchange trailblazer Muriel Siebert to environmental crusader Tara Church, Geeks and Geezers illustrates the stunning metamorphoses of true leaders. It also reveals the critical traits they share, including adaptability, vision, integrity, unquenchable optimism, and "neoteny"-a youthful curiosity and zest for knowledge. Highlighting the forces that enable any of us to learn and lead not for a time, but for a lifetime, this book is essential reading for geeks, geezers, and everyone in between. AUTHORBIO: Warren Bennis is Professor and Founding Chairman of The Leadership Institute at the University of Southern California, and the author of over thirty visionary books on leadership. Robert J. Thomas is an Associate Partner and Senior Fellow with the Accenture Institute for Strategic Change and award-winning author of What Machines Can't Do.

Editorial Reviews
Successful leaders young and old share numerous qualities, say Bennis and Thomas. The authors, who bring considerable experience to the table (Bennis has written over 30 books on leadership and Thomas is a senior fellow with Accenture's Institute for Strategic Change), interviewed more than 40 leaders who they deem either "geeks" (aged 21-34) or "geezers" (aged 70-82) to evaluate the effect of era on values and success. The two groups vary in terms of their ambitions, heroes and family lives, but members of both sets share one common experience: all have "undergone at least one intense, transformational experience," which the authors call a "crucible." In some cases the crucible was an actual hardship, e.g., geezer Sidney Rittenberg spent 16 years in prison in China for speaking out against the government. For others, it was a dramatic experience, such as NYSE pioneer Muriel Siebert's entry into male-dominated Wall Street in 1967 or geek Liz Altman's stint working at a Japanese Sony factory before becoming a Motorola v-p. The authors offer interviews and statistical data as evidence for the value of the crucible experiences. Among the survey results: of the geezers, 87% had mothers who worked at home, while only 7% of the geeks grew up similarly; 8% of the geezers had divorced parents, versus 44% of the geeks, both facts no doubt reflecting their eras.

"This invaluable book identifies the special qualities and experiences that help good managers become great leaders. It should be required reading for every aspiring leader."
–Howard Schultz, CEO, Starbucks

"Geeks and Geezers is an insightful and absorbing culling of wisdom from remarkable leaders whose ability to create meaning out of adversity is profunndly inspiring. Read this wonderful book for its useful lessons from those already at the top, but also to get to know the emerging heroes who are shaping our future and changing the very definition of leadership."
–Rosabeth Moss Kanter, Harvard Business School, and bestselling
author of Evolve! Succeeding in the Digital Culture of Tomorrow

"Geeks and Geezers is both Waren Bennis's most important and his most enjoyable book."
–Peter F. Drucker, Professor of Social Science and Management,
Claremont Graduate University

"An inspired idea, a tantalizing title, an essential book."
–Howard Gardner, coauthor of Good Work: When Exellence and Ethics Meet

"A great book for all ages and all seasons. I was humbled by the stories and inspired by the messages that bennis and Thomas drew form them."
–Charles Handy, social philosopher and author of The Elephant and the Flea

"As a geezer, I still want to understand leadership better- not just how to lead but also to follow the best people.
This book offers fresh and useful ideas from any reader's perspective."
–George P. Shultz, Thomas W. and Susan B. Ford Distinguished Fellow,
Hoover Institution, Stanford University