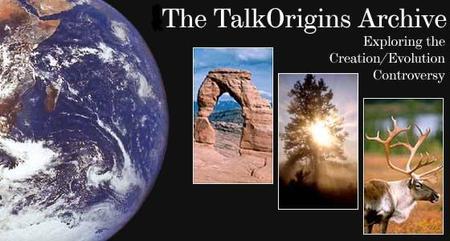 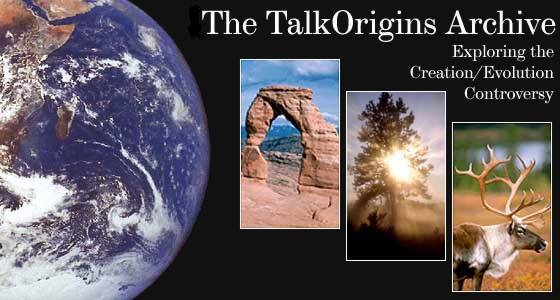 Talk.origins is a Usenet newsgroup devoted to the discussion and debate of biological and physical origins. Most discussions in the newsgroup center on the creation/evolution controversy, but other topics of discussion include the origin of life, geology, biology, catastrophism, cosmology and theology.


The TalkOrigins Archive is a collection of articles and essays, most of which have appeared in talk.origins at one time or another. The primary reason for this archive's existence is to provide mainstream scientific responses to the many frequently asked questions (FAQs) that appear in the talk.origins newsgroup and the frequently rebutted assertions of those advocating intelligent design or other creationist pseudosciences."

Thanks to our member Foub, who made us aware of this site in his comments here.

"2006/12/07: Sometime in mid-November, 2006, a cracker started exploiting the TalkOrigins Archive. The cracker managed to get the TOA de-indexed by Google, and when the TOA was re-indexed on 2006/12/05, the cracker stepped up his efforts to direct webspam to the Google-bot. In order to take back our site, we have taken the step of removing all the scripts on our site. We will restore static content as quickly as possible. We will restore other features, such as feedback, once we write secure scripts to handle those features. We apologize for the inconvenience. It may be some time before we can offer the features that have been script-based."

The website last appears to have been updated in 2006. I downloaded and zipped it to preserve this valuable resource just in case it gets hacked again or disappears forever. Apologies to site owners - I hope you will understand and forgive me. Evolutionists seem to be under greater attack than ever these days.)

Password - use our official default one, which you should be able to guess from this:
www.Av*xHo*e.ru
If you can't guess it, then pm Bully. :)