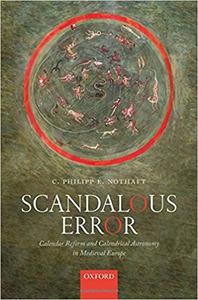 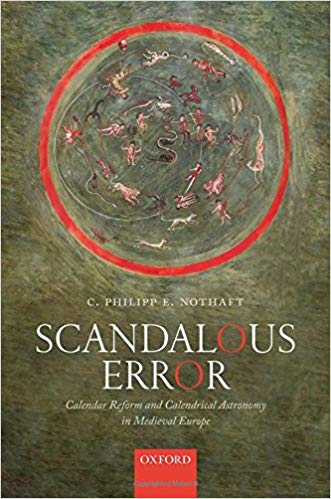 C. Philipp E. Nothaft, "Scandalous Error: Calendar Reform and Calendrical Astronomy in Medieval Europe"
English | ISBN: 0198799551 | 2018 | 384 pages | PDF | 211 MB
The Gregorian calendar reform of 1582, which provided the basis for the civil and Western ecclesiastical calendars still in use today, has often been seen as a triumph of early modern scientific culture or an expression of papal ambition in the wake of the Counter-Reformation. Much less attention has been paid to reform's intellectual roots in the European Middle Ages, when the reckoning of time by means of calendrical cycles was a topic of central importance to learned culture, as impressively documented by the survival of relevant texts and tables in thousands of manuscripts copied before 1500. For centuries prior to the Gregorian reform, astronomers, mathematicians, theologians, and even Church councils had been debating the necessity of improving or emending the existing ecclesiastical calendar, which throughout the Middle Ages kept losing touch with the astronomical phenomena at an alarming pace. Scandalous Error is the first comprehensive study of the medieval literature devoted to the calendar problem and its cultural and scientific contexts. It examines how the importance of ordering liturgical time by means of a calendar that comprised both solar and lunar components posed a technical-astronomical problem to medieval society and details the often sophisticated ways in which computists and churchmen reacted to this challenge. By drawing attention to the numerous connecting paths that existed between calendars and mathematical astronomy between the Fall of Rome and the end of the fifteenth century, the volume offers substantial new insights on the place of exact science in medieval culture.