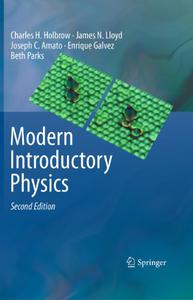 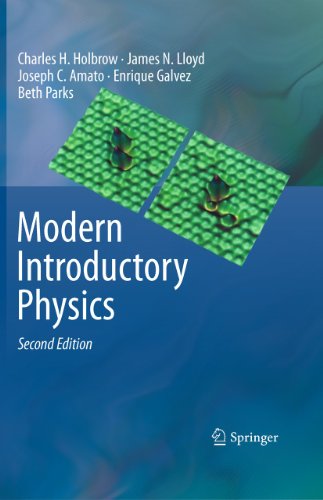 Modern Introductory Physics, 2nd Edition, by Charles H. Holbrow, James N. Lloyd, Joseph C. Amato, Enrique Galvez, and Beth Parks, is a successful innovative text for teaching introductory college and university physics. It is thematically organized to emphasize the physics that answers the fundamental question: Why do we believe in atoms and their properties? The book provides a sound introduction to basic physical concepts with particular attention to the nineteenth- and twentieth-century physics underlying our modern ideas of atoms and their structure.
After a review of basic Newtonian mechanics, the book discusses early physical evidence that matter is made of atoms. With a simple model of the atom Newtonian mechanics can explain the ideal gas laws, temperature, and viscosity. Basic concepts of electricity and magnetism are introduced along with a more complicated model of the atom to account for the observed electrical properties of atoms. The physics of waves–-particularly light and x-rays–-and basic features of relativity are explored and used to reveal further details of atomic structure. Following the discovery of radioactivity, transmutation, and the atomic nucleus, Bohr’s model of the hydrogen atom sets the stage for a view of the atom that becomes fully modern with the introduction of the ideas of quantum mechanics. This book presents these ideas in terms of the Heisenberg uncertainty principle and Feynman’s rules of quantum mechanics and also discusses the intriguing topics of entanglement, non-locality, and Bell’s inequalities. Here, as everywhere in this book, there is strong emphasis on experiments and observable phenomena that have shaped and confirmed the concepts of physics.

To help students make a good transition from high-school physics to university physics, this book fosters quantitative skills: There is much use of order-of-magnitude calculations, scaling arguments, proportionalities, approximations, and other basic tools of quantitative reasoning, progressing from simple and direct applications in the early parts of the book to more elaborate ones later. The book shows how new physics and new ideas are inferred from experimental data and quantitative reasoning. A large number of exercises and problems help students clarify their understanding.


Modern Introductory Physics, 2nd Edition, is an extensive revision of the original influential and innovative introductory text. This new edition includes:
- improved exposition of some difficult topics
- two new chapters that explore important and intriguing ideas of quantum mechanics in the context of real experiments
- many updated problems for students
- new questions added to many chapters
Without You And Your Support We Can’t Continue
Thanks For Buying Premium From My Links For Support