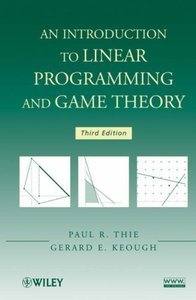 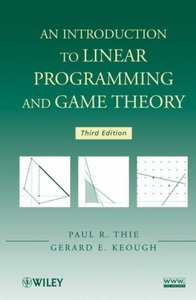 Paul R. Thie, Gerard E. Keough, "An Introduction to Linear Programming and Game Theory (3rd edition)"
2008 | ISBN: 0470232862 | 480 pages | PDF | 14 MB
An Introduction to Linear Programming and Game Theory, Third Edition presents a rigorous, yet accessible, introduction to the theoretical concepts and computational techniques of linear programming and game theory. Now with more extensive modeling exercises and detailed integer programming examples, this book uniquely illustrates how mathematics can be used in real-world applications in the social, life, and managerial sciences, providing readers with the opportunity to develop and apply their analytical abilities when solving realistic problems.

This Third Edition addresses various new topics and improvements in the field of mathematical programming, and it also presents two software programs, LP Assistant and the Solver add-in for Microsoft Office Excel®, for solving linear programming problems. LP Assistant, developed by coauthor Gerard Keough, allows readers to perform the basic steps of the algorithms provided in the book and is freely available via the book's related Web site. The use of the sensitivity analysis report and integer programming algorithm from the Solver add-in for Microsoft Office Excel® is introduced so readers can solve the book's linear and integer programming problems. A detailed appendix contains instructions for the use of both applications.

Additional features of the Third Edition include:

A discussion of sensitivity analysis for the two-variable problem, along with new examples demonstrating integer programming, non-linear programming, and make vs. buy models

A section on developing an example in Data Envelopment Analysis

An outline of the proof of John Nash's theorem on the existence of equilibrium strategy pairs for non-cooperative, non-zero-sum games

Providing a complete mathematical development of all presented concepts and examples, Introduction to Linear Programming and Game Theory, Third Edition is an ideal text for linear programming and mathematical modeling courses at the upper-undergraduate and graduate levels. It also serves as a valuable reference for professionals who use game theory in business, economics, and management science.