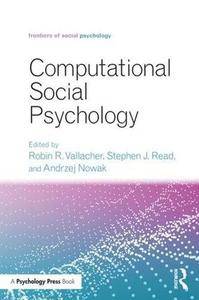 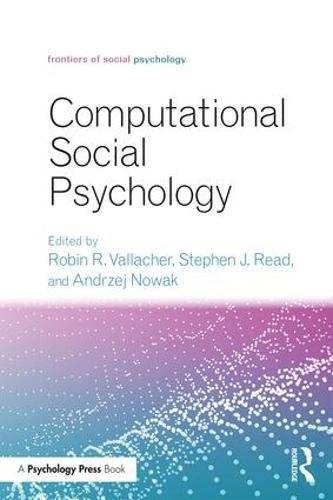 Computational Social Psychology showcases a new approach to social psychology that enables theorists and researchers to specify social psychological processes in terms of formal rules that can be implemented and tested using the power of high speed computing technology and sophisticated software. This approach allows for previously infeasible investigations of the multi-dimensional nature of human experience as it unfolds in accordance with different temporal patterns on different timescales. In effect, the computational approach represents a rediscovery of the themes and ambitions that launched the field over a century ago.

The book brings together social psychologists with varying topical interests who are taking the lead in this redirection of the field. Many present formal models that are implemented in computer simulations to test basic assumptions and investigate the emergence of higher-order properties; others develop models to fit the real-time evolution of people’s inner states, overt behavior, and social interactions. Collectively, the contributions illustrate how the methods and tools of the computational approach can investigate, and transform, the diverse landscape of social psychology.

Review
'Computational Social Psychology is a scientific gem. In a world of constant change, we desperately need new theoretical models and tools to understand the complexity of human dynamics. This volume, edited by the world’s best dynamical social psychologists, with chapters from global experts on topics that span different levels of analysis, promises to change the way we think about―and study―human behavior.' - Michele J. Gelfand, University of Maryland, USA

'Computational modelling is an increasingly important way of doing science, and in some disciplines it has become the dominant method to understand the world. This important book shows how computational models can contribute to advances in social psychology that respect the complexity of human interactions.' - Nigel Gilbert, University of Surrey, UK

'Computational Social Psychology is a volume the field has been waiting for. It provides a launchpad for new theoretical approaches that can cope with the complexity of social reasoning and interpersonal behavior.' - Keith J. Holyoak, University of California, Los Angeles, USA

About the Author
Robin R. Vallacher is professor of Psychology at Florida Atlantic University, a Research Associate in the Center for Complex Systems, University of Warsaw, Poland, and a Research Affiliate in the Advanced Consortium on Cooperation, Conflict, and Complexity at Columbia University. He has been a visiting scholar at University of Texas at Austin, University of Bern (Switzerland), Max Planck Institute for Psychological Research (Germany), and University of Montpellier (France). Dr. Vallacher has authored or edited seven professional texts, and has published over 100 book chapters and journal articles on a wide range of topics in social psychology, including self-concept, self-regulation, social judgment, close relationships, prejudice and discrimination, sport psychology, social justice, and intergroup conflict. In recent years, he and his colleagues have adapted concepts and methods from the study of nonlinear dynamical systems in the natural sciences to the investigation of personal, interpersonal, and societal processes.

Andrzej Nowak is a professor of psychology at Florida Atlantic University, University of Warsaw, Poland, where he directs the Center for Complex Systems, and Warsaw University of Humanities and Social Sciences. He is also a Fellow at the European Center for Living Technologies, and a Research Affiliate in the Advanced Consortium on Cooperation, Conflict, and Complexity at Columbia University. Dr. Nowak has authored or edited 16 professional texts, and has published over 100 book chapters and journal articles on a wide range of topics in social psychology, including social influence, social change, self-concept, self-regulation, social judgment, sport psychology, intergroup conflict, and psychological aspects of new media. Working with his colleagues, he has adapted concepts and methods from the study of complex systems and nonlinear dynamics in the natural sciences to the investigation of personal, interpersonal, and societal processes. He publishes in psychology, physics, and interdisciplinary journals.