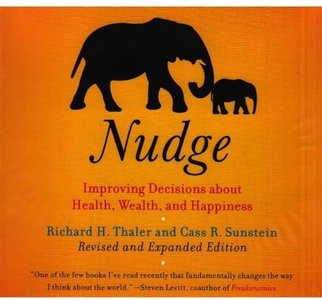 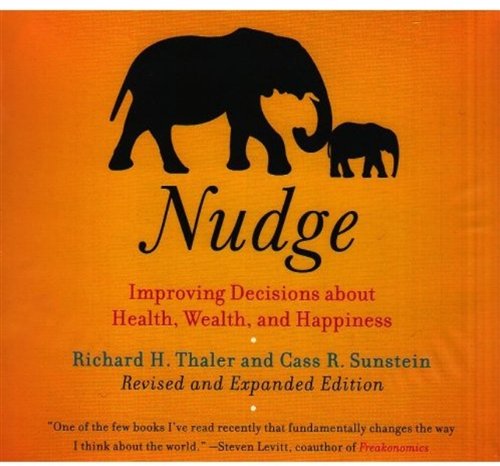 Nudge: Improving Decisions About Health, Wealth, and Happiness (Your Coach in a Box) [Unabridged] by Richard H. Thaler
Publisher: Your Coach In A Box; Unabridged edition (April 1, 2009) | ISBN: 1596592702 | Language English | Audio CD in MP3/96 kbps | 503 MB
Every day, we make decisions on topics ranging from personal investments to schools for our children to the meals we eat to the causes we champion. Unfortunately, we often choose poorly. The reason, the authors explain, is that, being human, we all are susceptible to various biases that can lead us to blunder. Our mistakes make us poorer and less healthy; we often make bad decisions involving education, personal finance, health care, mortgages and credit cards, the family, and even the planet itself. Thaler and Sunstein invite us to enter an alternative world, one that takes our humanness as a given. They show that by knowing how people think, we can design choice environments that make it easier for people to choose what is best for themselves, their families, and their society. Using colorful examples from the most important aspects of life, Thaler and Sunstein demonstrate how thoughtful “choice architecture” can be established to nudge us in beneficial directions without restricting freedom of choice.

Amazon.com: What do you mean by "nudge" and why do people sometimes need to be nudged?

Thaler and Sunstein: By a nudge we mean anything that influences our choices. A school cafeteria might try to nudge kids toward good diets by putting the healthiest foods at front. We think that it's time for institutions, including government, to become much more user-friendly by enlisting the science of choice to make life easier for people and by gentling nudging them in directions that will make their lives better.

Amazon.com: What are some of the situations where nudges can make a difference?

Thaler and Sunstein: Well, to name just a few: better investments for everyone, more savings for retirement, less obesity, more charitable giving, a cleaner planet, and an improved educational system. We could easily make people both wealthier and healthier by devising friendlier choice environments, or architectures.

Amazon.com: Can you describe a nudge that is now being used successfully?

Thaler and Sunstein: One example is the Save More Tomorrow program. Firms offer employees who are not saving very much the option of joining a program in which their saving rates are automatically increased whenever the employee gets a raise. This plan has more than tripled saving rates in some firms, and is now offered by thousands of employers.

Amazon.com: What is "choice architecture" and how does it affect the average person's daily life?

Thaler and Sunstein: Choice architecture is the context in which you make your choice. Suppose you go into a cafeteria. What do you see first, the salad bar or the burger and fries stand? Where's the chocolate cake? Where's the fruit? These features influence what you will choose to eat, so the person who decides how to display the food is the choice architect of the cafeteria. All of our choices are similarly influenced by choice architects. The architecture includes rules deciding what happens if you do nothing; what's said and what isn't said; what you see and what you don't. Doctors, employers, credit card companies, banks, and even parents are choice architects.

We show that by carefully designing the choice architecture, we can make dramatic improvements in the decisions people make, without forcing anyone to do anything. For example, we can help people save more and invest better in their retirement plans, make better choices when picking a mortgage, save on their utility bills, and improve the environment simultaneously. Good choice architecture can even improve the process of getting a divorce–or (a happier thought) getting married in the first place!

Amazon.com: You are very adamant about allowing people to have choice, even though they may make bad ones. But if we know what's best for people, why just nudge? Why not push and shove?

Thaler and Sunstein: Those who are in position to shape our decisions can overreach or make mistakes, and freedom of choice is a safeguard to that. One of our goals in writing this book is to show that it is possible to help people make better choices and retain or even expand freedom. If people have their own ideas about what to eat and drink, and how to invest their money, they should be allowed to do so.

Amazon.com: You point out that most people spend more time picking out a new TV or audio device than they do choosing their health plan or retirement investment strategy? Why do most people go into what you describe as "auto-pilot mode" even when it comes to making important long-term decisions?

Thaler and Sunstein: There are three factors at work. First, people procrastinate, especially when a decision is hard. And having too many choices can create an information overload. Research shows that in many situations people will just delay making a choice altogether if they can (say by not joining their 401(k) plan), or will just take the easy way out by selecting the default option, or the one that is being suggested by a pushy salesman.

Second, our world has gotten a lot more complicated. Thirty years ago most mortgages were of the 30-year fixed-rate variety making them easy to compare. Now mortgages come in dozens of varieties, and even finance professors can have trouble figuring out which one is best. Since the cost of figuring out which one is best is so hard, an unscrupulous mortgage broker can easily push unsophisticated borrowers into taking a bad deal.

Third, although one might think that high stakes would make people pay more attention, instead it can just make people tense. In such situations some people react by curling into a ball and thinking, well, err, I'll do something else instead, like stare at the television or think about baseball. So, much of our lives is lived on auto-pilot, just because weighing complicated decisions is not so easy, and sometimes not so fun. Nudges can help ensure that even when we're on auto-pilot, or unwilling to make a hard choice, the deck is stacked in our favor.

Amazon.com: Are we humans just poorly adapted for making sound judgments in an increasingly fast-paced and complex world? What can we do to position ourselves better?

Thaler and Sunstein: The human brain is amazing, but it evolved for specific purposes, such as avoiding predators and finding food. Those purposes do not include choosing good credit card plans, reducing harmful pollution, avoiding fatty foods, and planning for a decade or so from now. Fortunately, a few nudges can help a lot. A few small hints: Sign up for automatic payment plans so you don’t pay late fees. Stop using your credit cards until you can pay them off on time every month. Make sure you're enrolled in a 401(k) plan. A final hint: Read Nudge.


Review
"How often do you read a book that is both important and amusing, both practical and deep? This gem of a book presents the best idea that has come out of behavioral economics. It is a must-read for anyone who wants to see both our minds and our society working better. It will improve your decisions and it will make the world a better place."-Daniel Kahneman, Princeton University, Nobel Laureate in Economics (Daniel Kahneman )

"In this utterly brilliant book, Thaler and Sunstein teach us how to steer people toward better health, sounder investments, and cleaner environments without depriving them of their inalienable right to make a mess of things if they want to. The inventor of behavioral economics and one of the nation''s best legal minds have produced the manifesto for a revolution in practice and policy. Nudge won''t nudge you-it will knock you off your feet."-Daniel Gilbert, professor of psychology, Harvard University, Author of Stumbling on Happiness (Daniel Gilbert )

"This is an engaging, informative, and thoroughly delightful book. Thaler and Sunstein provide important lessons for structuring social policies so that people still have complete choice over their own actions, but are gently nudged to do what is in their own best interests. Well done."-Don Norman, Northwestern University, Author of The Design of Everyday Things and The Design of Future Things (Don Norman )

"This book is terrific. It will change the way you think, not only about the world around you and some of its bigger problems, but also about yourself."-Michael Lewis, author of The Blind Side: Evolution of a Game and Liar''s Poker (Michael Lewis )

"Two University of Chicago professors sketch a new approach to public policy that takes into account the odd realities of human behavior, like the deep and unthinking tendency to conform. Even in areas-like energy consumption-where conformity is irrelevant. Thaler has documented the ways people act illogically."-Barbara Kiviat, Time (Barbara Kiviat Time )

"Richard Thaler and Cass Sunstein''s Nudge is a wonderful book: more fun than any important book has a right to be-and yet it is truly both."-Roger Lowenstein, author of When Genius Failed (Roger Lowenstein )

"I love this book. It is one of the few books I''ve read recently that fundamentally changes the way I think about the world. Just as surprising, it is fun to read, drawing on examples as far afield as urinals, 401(k) plans, organ donations, and marriage. Academics aren''t supposed to be able to write this well."-Steven Levitt, Alvin Baum Professor of Economics, University of Chicago Graduate School of Business and co-author of Freakonomics: A Rogue Economist Explores the Hidden Side of Everything (Steven Levitt )
–This text refers to the Hardcover edition.
Review
'I love this book. It is one of the few books I've read recently that fundamentally changes the way I think about the world' Steven Levitt, author of Freakonomics 'This is a book that every CEO, or aspiring CEO, will want to read' James Kilts, former CEO of Gillette 'A manifesto for using the recent behavioral research to help people, as well as government agencies, companies and charities, make better decisions' New York Times 'A must-read for anyone who wants to see both our minds and our society working better. It will improve your decisions and it will make the world a better place' Daniel Kahneman, Nobel Laureate in Economics 'Nudge is as important a book as any I've read in perhaps 20 years' Barry Schwartz, author of The Paradox of Choice 'I am badly remiss for not heartily, vigorously, unabashedly endorsing for your immediate and intense attention the relatively new Nudge, by Richard Thaler and Cass Sunstein' Tom Peters, manangement guru 'Richard Thaler and Cass Sunstein's "Nudge" is a wonderful book. More fun than any important book has a right to be - and yet it is truly both' Roger Lowenstein, author of When Genius Failed 'Nudge won't nudge you - it will knock you off your feet' Daniel Gilbert, author of Stumbling on Happiness –This text refers to an out of print or unavailable edition of this title.