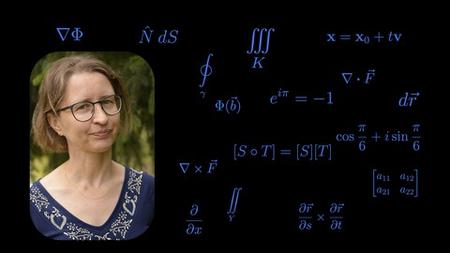 Towards and through the vector fields, part 2 of 2. Integrals and vector calculus.

What you'll learn
How to solve problems in multivariable calculus and vector calculus (illustrated with more than 150 solved problems) and why these methods work.
7 types of integrals: double, double improper, triple, line and surface integrals of functions and of vector fields.
Green's, Stokes' and Gauss' theorems.
Conservative vector fields and their potentials; fundamental theorem for conservative vector fields.
Gradient, curl and divergence.
Direct and inverse substitutions for multiple integrals with many examples; Fubini's theorem for various types of domains.
Surfaces as graphs of functions of two variables and parametric surfaces.
Five methods of computing line integrals of vector fields and four methods of computing surface integrals of vector fields (flux integrals).
Requirements
Calculus 1 and 2
Some linear algebra
Calculus 3, part 1 or an equivalent (curves, sets in the plane, functions of several variables with limits, continuity and differentiability, partial derivatives, and simple PDEs)
Description
Calculus 3 / Multivariable Calculus, Part 2 of 2

Towards and through the vector fields

Introduction to the course; repetition (Riemann integrals, sets in the plane, curves)

Improper integrals.
You will learn: motivate if an improper integral is convergent or divergent; use the mean-value theorem for double integrals in order to compute the mean value for a two-variable function on a compact connected set.

You will learn: apply multiple integrals for various aims.

You will learn: understand surfaces described as graphs to two-variable functions f:R^2–>R and as parametric surfaces, being graphs of r:R^2–>R^3; determine whether a surface is closed and determine surfaces' boundary; determine normal vector to surfaces; calculate surface integrals of scalar functions and use them for computation of mass and area.

Gradient, divergence and curl and some identities involving them; irrotational and solenoidal vector fields (Ch. 16.1–2)

You will learn: define and compute curl and divergence of (two- and three-dimensional) vector fields and proof some basic formulas involving gradient, divergence and curl; apply Green's, Gauss's and Stokes's theorems, estimate when it is possible (and convenient) to apply these theorems.

Also make sure that you check with your professor what parts of the course you will need for your final exam. Such things vary from country to country, from university to university, and they can even vary from year to year at the same university.

Who this course is for:
University and college engineering