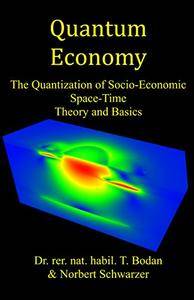 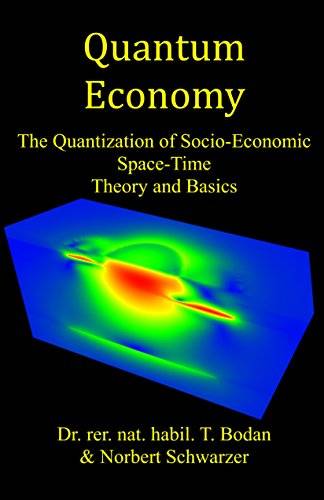 Quantum Economy - The Quantization of Socio-Economic Space-Time: Theory and Basics by Dr. rer. nat. habil. T. Bodan
English | 5 Feb. 2017 | ASIN: B01N80I0NG | 59 Pages | PDF (True) | 1.26 MB
1.The existence of a maximum propagation speed for goods and information in a financial or economical system leads to an Economic Theory of Relativity.
2.From this fact, eminent danger arises from the so-called “high-frequency-trading” and other financial “inventions” as being partially decoupled from the market of real things and acting with a much higher “speed of light limit” then the real rest. The real economy on the other hand, does not profit from any of these financial market activities but suffers severely. In has to be concluded even that the financial market in its present, mainly unregulated form, is nothing but a parasite to the rest of the world.
3.It will be shown that assets and debts, yes, any form of capital and values can properly be described by a vectorial or tensorial mass. There are also gravitational fields acting in between the various masses and inertia and that, as in physics, with the equivalency of inertia and gravitational mass we end up with an Economic General Theory of Relativity.
4.Such inertia do automatically explain certain oscillation effects observable in socio-economic system and usually mirrored on the stock market. They are simply resonance effects. Knowing the model parameters would allow for a system set-up which would be frequency optimized and thus, resistant with respect to resonance catastrophes. Governments worldwide should pay great attention to such optimization in order to avoid further nation-wide or even global meltdowns as seen recently with the subprime crisis or the Chinese stock market volatilities.
5.Quantization of such relativistic socio-economic systems, finally leads us to minimum portions of capital, depending on the properties of the surrounding economic space described by a metric. Depending on such properties or conditions the dynamic of any economic space can be either severely hindered or massively be brought forward. Observing the global political measures however (e.g. the world bank and the G20), it must be concluded that politics has no inkling whatsoever about the real workings of finance and real economy. Alternatively, politics might simply have no might over the finance system and its hole “blundering action” is nothing but pretense.
6.It will be seen that the existence of a permanent jitter of virtual “particles” acting in economy as subsidiary markets is an unavoidable, inextinguishable and what is more needed part of every socio-economic system. These background fields provide diversity and flexibility. The trial of dunderhead politicians (mainly European ones) to eradicate these secondary or subsidiary markets, show how little they actually understand and how unqualified they are for their job.
7.It will also be explained that the Draghi measures with the EZB are mainly scalar and globally equivalent to a cosmological constant, which only inflates the system without healing anything. Knowing this, it becomes clear, that Draghi’s “whatever it takes” is nothing but a criminal delayed filing of insolvency and that his very few selective portions of measures are nothing but favoritism of cronies, side-kicks and states, which are unwilling to perform necessary economic and social reforms, most of all, his own home country. Unfortunately, this is to the cost of all European taxpayers.
8.Finally, it will be discussed how migration can be modeled within the system. It will be demonstrated that the mass infiltration of “economic and social riff-raff”, which is to say totally unsuitable workforce without qualification, improper social or other skills and virtually no education, absolutely no willingness to learn, adapt and integrate, destroys the integrity of an otherwise healthy socio-economic system. This infiltration namely, as so haphazardly and planlessly performed by the Merkel-Government is perfectly equivalent to defects, weakening or even destroying the economic and social foundations of the host society.