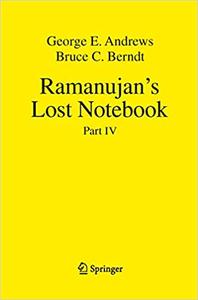 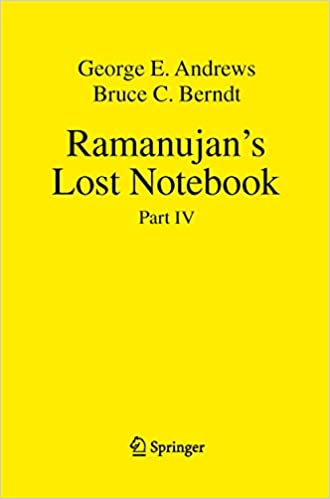 George E. Andrews, Bruce C. Berndt, "Ramanujan's Lost Notebook: Part IV"
English | 2013 | ISBN: 1493976273, 1489991751, 1461440807 | 460 pages | PDF | 3.5 MB
In the spring of 1976, George Andrews of Pennsylvania State University visited the library at Trinity College, Cambridge, to examine the papers of the late G.N. Watson. Among these papers, Andrews discovered a sheaf of 138 pages in the handwriting of Srinivasa Ramanujan. This manuscript was soon designated, "Ramanujan's lost notebook." Its discovery has frequently been deemed the mathematical equivalent of finding Beethoven's tenth symphony.

This volume is the fourth of five volumes that the authors plan to write on Ramanujan’s lost notebook.​ In contrast to the first three books on Ramanujan's Lost Notebook, the fourth book does not focus on q-series. Most of the entries examined in this volume fall under the purviews of number theory and classical analysis. Several incomplete manuscripts of Ramanujan published by Narosa with the lost notebook are discussed. Three of the partial manuscripts are on diophantine approximation, and others are in classical Fourier analysis and prime number theory. Most of the entries in number theory fall under the umbrella of classical analytic number theory. Perhaps the most intriguing entries are connected with the classical, unsolved circle and divisor problems.

Review from the second volume:

"Fans of Ramanujan's mathematics are sure to be delighted by this book. While some of the content is taken directly from published papers, most chapters contain new material and some previously published proofs have been improved. Many entries are just begging for further study and will undoubtedly be inspiring research for decades to come. The next installment in this series is eagerly awaited."

Review from the first volume:

"Andrews and Berndt are to be congratulated on the job they are doing. This is the first step…on the way to an understanding of the work of the genius Ramanujan. It should act as an inspiration to future generations of mathematicians to tackle a job that will never be complete."

- Gazette of the Australian Mathematical Society​