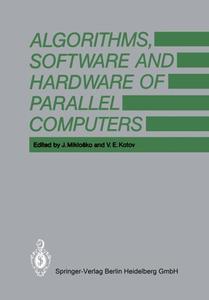 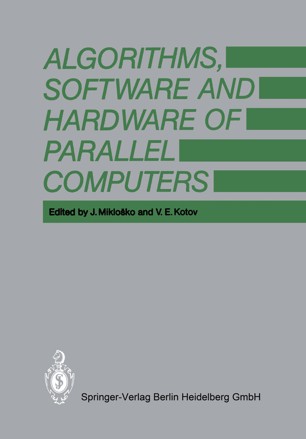 Both algorithms and the software . and hardware of automatic computers have gone through a rapid development in the past 35 years. The dominant factor in this development was the advance in computer technology.
Computer parameters were systematically improved through electron tubes, transistors and integrated circuits of ever-increasing integration density, which also influenced the development of new algorithms and programming methods. Some years ago the situation in computers development was that no additional enhancement of their performance could be achieved by increasing the speed of their logical elements, due to the physical barrier of the maximum transfer speed of electric signals. Another enhancement of computer performance has been achieved by parallelism, which makes it possible by a suitable organization of n processors to obtain a perform­ ance increase of up to n times. Research into parallel computations has been carried out for several years in many countries and many results of fundamental importance have been obtained. Many parallel computers have been designed and their algorithmic and program­ ming systems built. Such computers include ILLIAC IV, DAP, STARAN, OMEN, STAR-100, TEXAS INSTRUMENTS ASC, CRAY-1, C mmp, CM*, CLIP-3, PEPE. This trend is supported by the fact that: a) many algorithms and programs are highly parallel in their structure, b) the new LSI and VLSI technologies have allowed processors to be combined into large parallel structures, c) greater and greater demands for speed and reliability of computers are made.
i will be very grateful when you support me and buy Or Renew Your Premium from my Blog links
i appreciate your support Too much as it will help me to post more and more