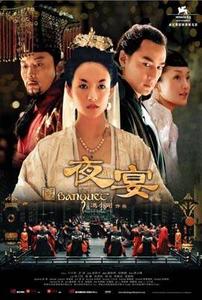 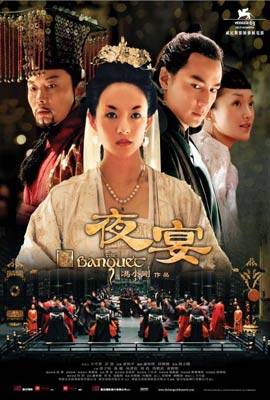 The Banquet has been described as a loose adaptation of “Hamlet”; it is a tale of fate and revenge set in 10th century China. A new Emperor has usurped the throne through murder. Zhang Ziyi plays the widowed Empress, who marries the new Emperor (Ge You) only to protect herself, but also secretly plots his death with the help of the Crown Prince (Daniel Wu) and the Chief Minister (Ma Jingwu). Yet the Prince and Minister each have their own plans for the throne, and, of course, so does the Emperor. All these intrigues are brought to a climax when the Emperor calls for a lavish banquet, where the murderous plans are set in motion. According to director Feng Xiaogang: “If Hamlet is about a prince who must make a choice involving life and death, then The Banquet is about how each character must face a choice of life or death… All are motivated by desire, but as soon as they have begun their plans must grow more extreme, and they move step-by-step towards the abyss… They do not intend evil, but turn to it out of self-preservation and ever-growing ambition.”