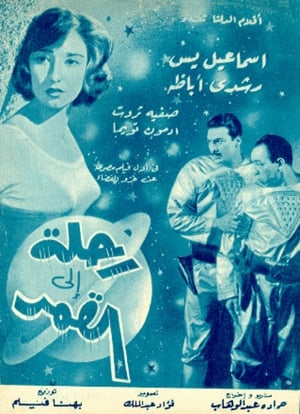 Journey to the Moon (1959)
In his quest for fame and success, Ismail, a driver for a newspaper company, tries to take some unauthorized photographs of the inside of a German rocket undergoing a technical test. He accidentally launches the rocket into space, taking with him Dr Sharvin, the German scientist who built the rocket, and Ahmad Rushdi, an Egyptian meteorologist. When their rocket somehow manages to land upon the moon, the three hapless space travelers meet Dr Cosmo and learn of the intelligent life that once inhabited the moon but which was all but annihilated by a nuclear war. After Rushdi falls in love with one of the moon girls, they all decide to return to earth but lack enough fuel for the trip and so have to venture to the foreboding far side of the moon to obtain some 'atomic petrol.' Will the crew ever return to the earth?
Action Comedy Science Fiction