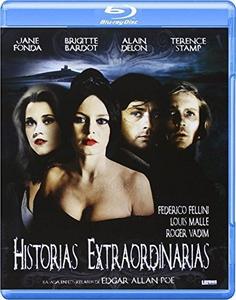 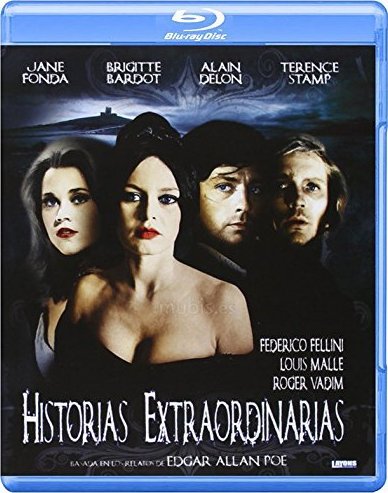 Three directors each adapt a Poe short story to the screen: "Toby Dammit" features a disheveled drugged and drunk English movie star who nods acceptance in the Italian press and his producers fawn over him. "Metzengerstein" features a Mediveal countess who has a love-hate relationship with a black stallion - who, it turns out is really her dead lover. "William Wilson" tells the story of a sadistic Austrian student with an exact double whom he later kills.

Three Edgar Alan Poe stories, three directors, a genius director, a great director and a director. The top international stars of their day: Jane Fonda, Peter Fonda, Terence Stamp, Alain Delon and Brigitte Bardot. The Roger Vadim episode with the two Fondas is quite terrible, Jane with her left over costumes from Barbarella, is always watchable but what a mess. Delon and Bardot are fun to watch but the piece looks more a rehash of one of the weakest Hammer horror flicks than a film signed by the great Louis Malle. However, I wouldn't mind sitting through those turkeys once again for the sheer pleasure of the third segment: Fellini's "Toby Dammit" with a superlative Terence Stamp. Unique, unnerving, jaw dropping, funny, delightful gem of a film.