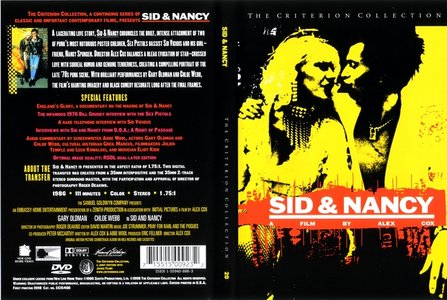 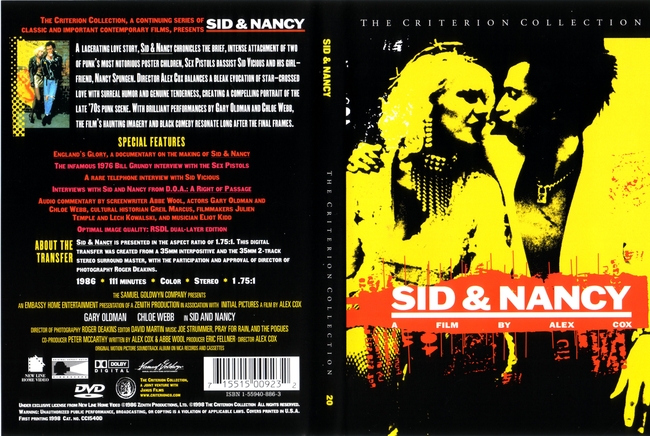 Sid meets Nancy in London. Her carefree attitude about drugs, sex and nihilistic existence fits in well with the band, and she becomes an official hanger-on. After Nancy has a beer thrown on her by an angry bar patron, Vicious moves to comfort her. It’s not a “Hugh Grant” romantic moment, but a Sid Vicious moment, a small gesture of affection which shows his interest in her. During their conversation Sid asks her for some heroin. This is music to Nancy’s ears, and thus begins the downward spiral of their lives. 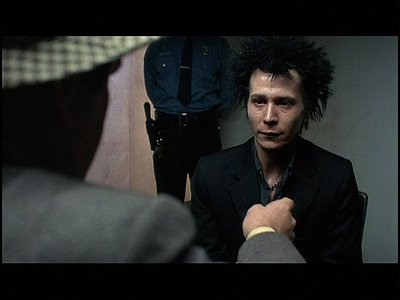 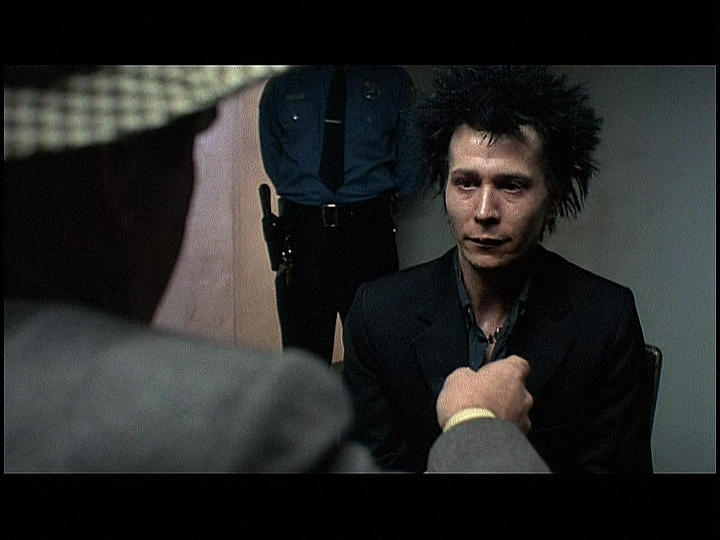 As Nancy and Sid become closer entwined with each other, so does their insular self-perpetual drug habit. And not surprisingly they quickly drift apart from the band. Just prior to leaving for America, in order to keep Sid clean, the band tells him that he can’t take Nancy on tour. Sid goes to America alone, but their love persists. Sid’s behaviour doesn’t improve, and eventually he’s kicked out of the band for good. Sid and Nancy work together on Sid’s career as a solo artist - the recreation of Sid’s music video for “My Way”, as a scene unto itself, is fascinating - until the drugs fatally destroy both their lives. 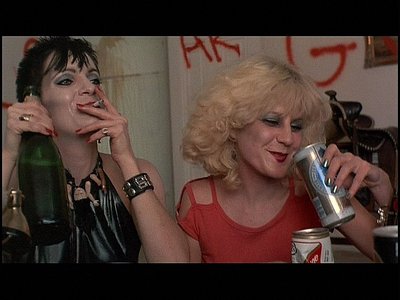 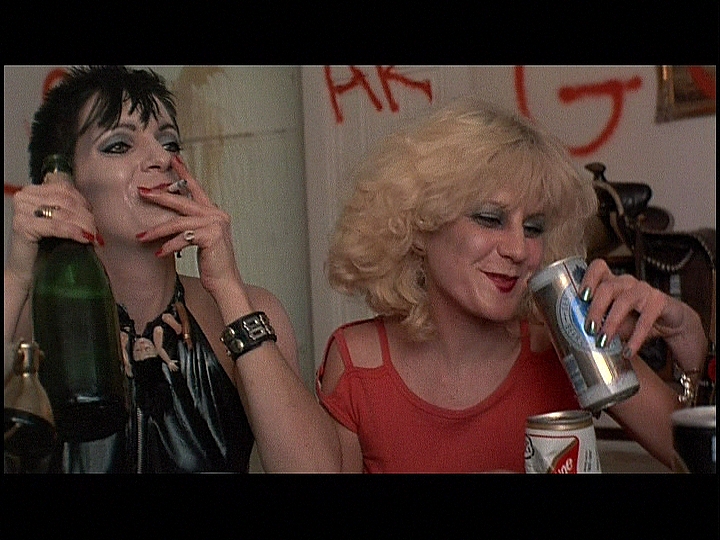 “Sid & Nancy” is not without some humour. Junkie antics such as, trashing hotel rooms, beating each other up, falling down in inappropriate places and saying really stupid shit treads finely between horror and humour. Note their visit to Nancy’s parent’s house which borders on the ridiculous – Nancy’s conservative parents entertaining the junkie-to beat-all-junkies at the dinner table and their funny half-hearted attempts to tell them they don’t want heroin-addicts in the house is the blackest of black comedy.

“Sid & Nancy” is also not without beauty. Shot by a young Roger Deakins, the film features scenes of remarkably poetic beauty, specifically Sid and Nancy’s passionate kiss in an alleyway underneath falling garbage. 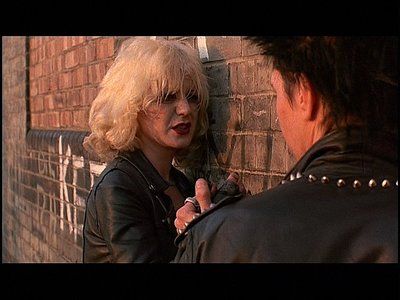 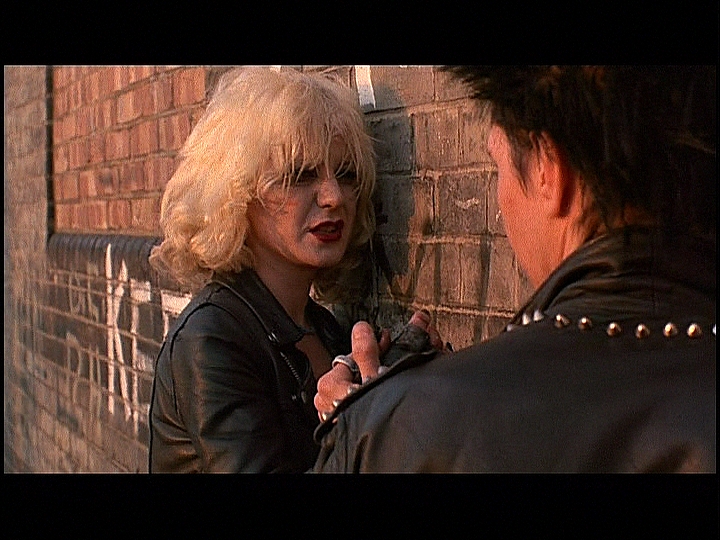 Director Alex Cox (also "Repo Man") has marked a unique place for himself as one of cinema’s most idiosyncratic directors. He kept “Sid & Nancy” authentic when it could easily have turned into melodrama. And there’s much more story to tell, including his morbid childhood and his harrowing experiences on Riker’s Island prison. Cox even stays away from the temptation to overexploit to salaciousness of his drug taking. And if you ever thought this live-fast/die young junkie love story foreshadowed the troubled life of our generation’s Sid Vicious, Kurt Cobain, then the unintentional-cameo of Courtney Love late in the film will freak you out! (and remember this was made in 1986) Either Alex Cox is clairvoyant or he’s a genius. Either way, it makes the film even more complex. Enjoy.
Daily Film Dose 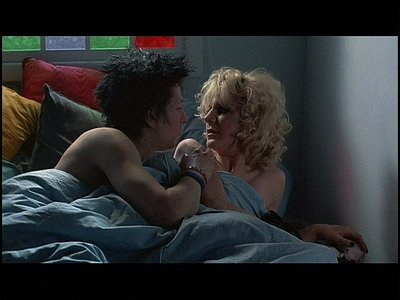 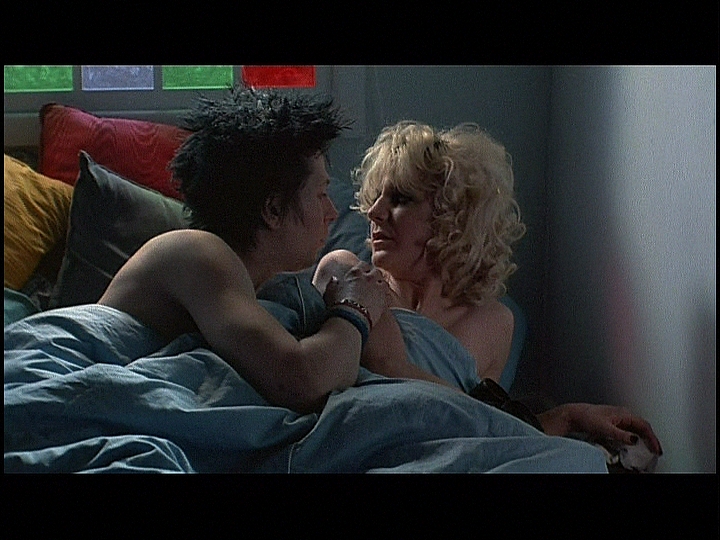 Opening with the arrest of Sid after the stabbing death of Nancy Spungen in the Chelsea Hotel (Sid's guilt has been disputed in recent years), Alex Cox fashions his biopic/love story as a comic rise and tragic fall flashback with doses of magical realism. While it's clear much of the story is being viewed through rose colored glasses (the real John Lydon hated the flick for romanticizing the inter-dependent relationship), Cox's vision is so vivid, his is the legend to print. Gary Oldman, who lost so much weight to play Sid he landed in the hospital, should have been Oscar nominated for his comic yet touching and very physical performance. 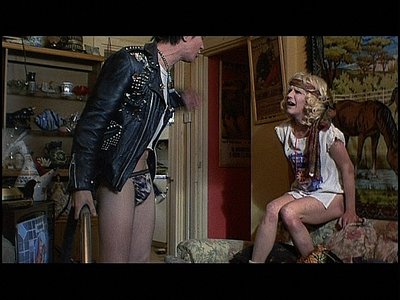 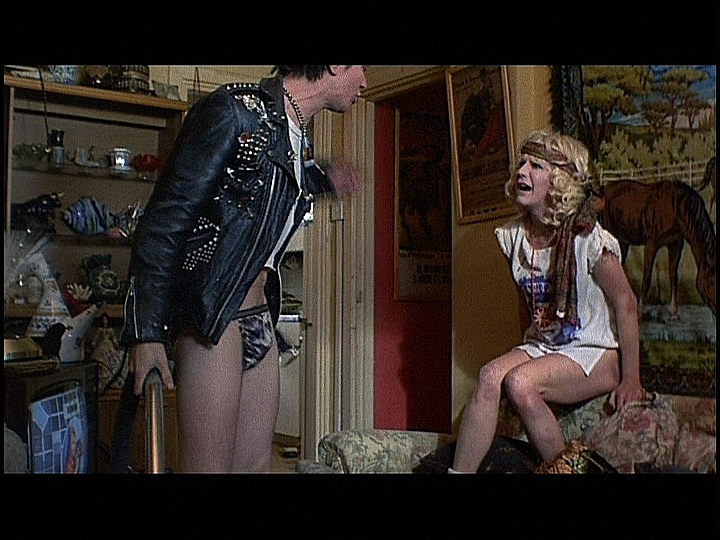 Sid and John walk down a fashionable street kicking in the hood ornaments of expensive cars, screaming for 'Linda!' Linda (Anne Lambton, "Brothers of the Head") is an S&M dominatrix who entertains the boys and a client at the same time. It is at Linda's that Sid first meets Nancy Spungen (Chloe Webb, "Twins"), who keeps mistaking him for John. Later Sid comes to Nancy's defense when she's ripped off on a drug deal for Rock Head (Stuart Fox), a fictionalized version of Iggy Pop ('They call me the Godfather of punk!'), showing empathy by bashing his head into a brick wall. Nancy thanks him with his first taste of heroin, which lands him violently riding the porcelain bus. It's true love, punk rock style. 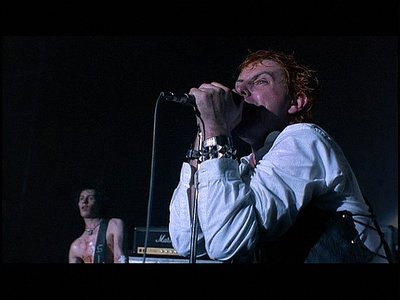 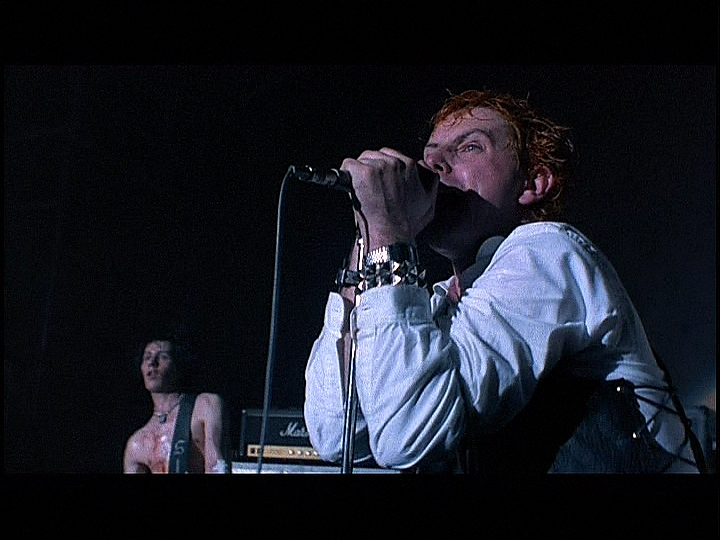 When the Pistols head to the U.S. for a tour, everyone but Sid decides Nancy cannot come, and Sid begins his downward slide on the road, crashing through plate glass, carving himself up with a razor blade, missing her. The band falls apart and Nancy arrives in New York to nurse Sid back to health and take him home to her perplexed Granma (Gloria LeRoy) and Granpa's (Milton Selzer) for a family dinner. Nancy decides she will become Sid's manager for his sure-to-be-illustrious solo career, but their drug addiction becomes their be and end all. Cox presents his own theory of how Nancy died of stab wounds before sending his duo off in a magical taxi cab chased by a bunch of little kids. 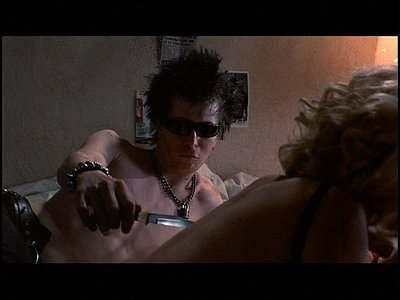 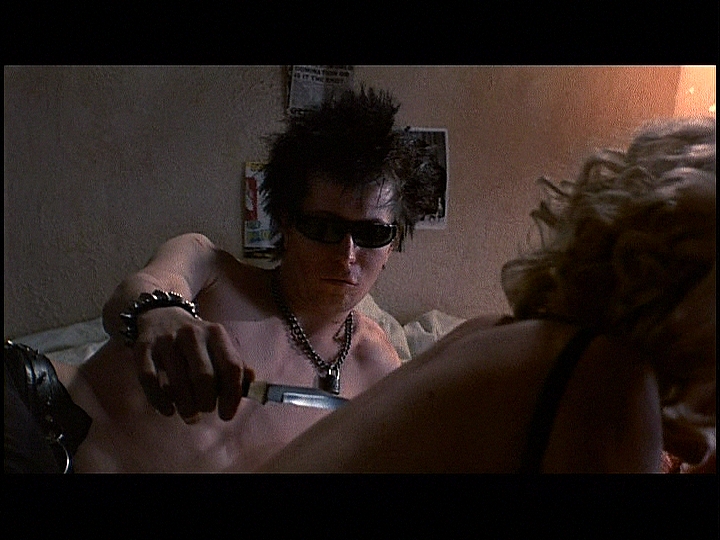 Cox conjures one terrific moment after the next, from the Pistols' controversial Thames barge 'celebrating' the Queen's birthday to the shooting of Sid's 'My Way' video to the fire set by a cigarette when the couple fall asleep in their Chelsea Hotel room. The screenplay features an abudance of iconic lines and cinematographer Roger Deakins ("No Country for Old Men") creates so many memorable visuals - Sid and Nancy kissing next to a dumpster as trash wafts and swirls down around them, a helicopter rising from the horizon behind the Sex Pistols' tour caravan on a lonely stretch of highway, the bizarre tableau of Rock Head's hotel room, Sid and Nancy's heads peaking out from their bed one jet black the other unnaturally blonde, a priest walking by as Sid and Nancy battle in the street - that the film became an instant classic. Original music by Pray for Rain is distinctive and romantic and in stark contrast yet oddly complementary to soundtrack selections from Joe Strummer, the Circle Jerks, The Pogues and covers performed by the actors. Small bits of whimsy like a cocked finger that really shoots or a Keystone Kop scattering of kids seem normal in Sid and Nancy's world. Even Cox's apparent mistakes, some obvious overdubbing of dialogue, seem woven into his overall fabric after multiple viewings. 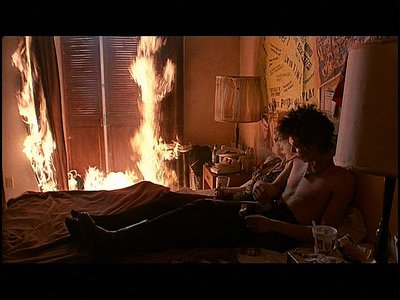 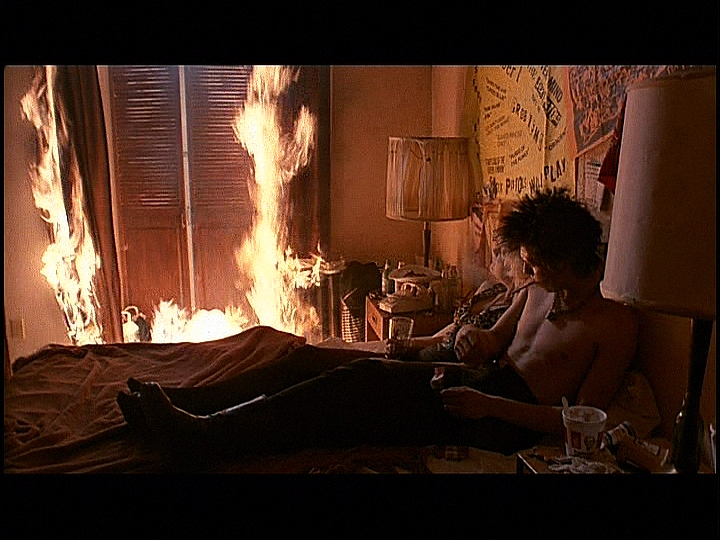 Oldman and his director perhaps make Sid a little too easy to like, a somewhat befuddled adolescent with a soft heart. Oldman's Sid is an intriguing mix of familial respect and jovial anarchy with the ocassional unexpected bit of solid reasoning. Webb, who famously won the role over Courtney Love (who appears in a smaller role as camp follower Gretchen), is a Betty Boop groupie, all spun sugar bottle blond, false eyelashes, ripped fishnets and Jersey squawk. Webb gives Nancy a golddigger surface with a core of pain and flashes of a soft vulnerability. Andrew Schofield's a very convincing Lydon, sneering confidence and impotent disgust with his friend's choices, and David Hayman ("The Boy in the Striped Pajamas") brings out the arch showmanship of McLaren. Watch for Sy Richardson ("Larry Crowne") as the duo's methadone caseworker and Xander Berkeley ("Taken," "Kick-Ass") as their dealer and reluctant witness to Nancy's death scene. 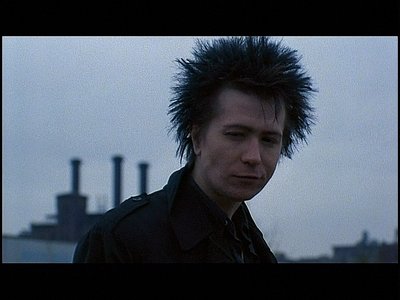 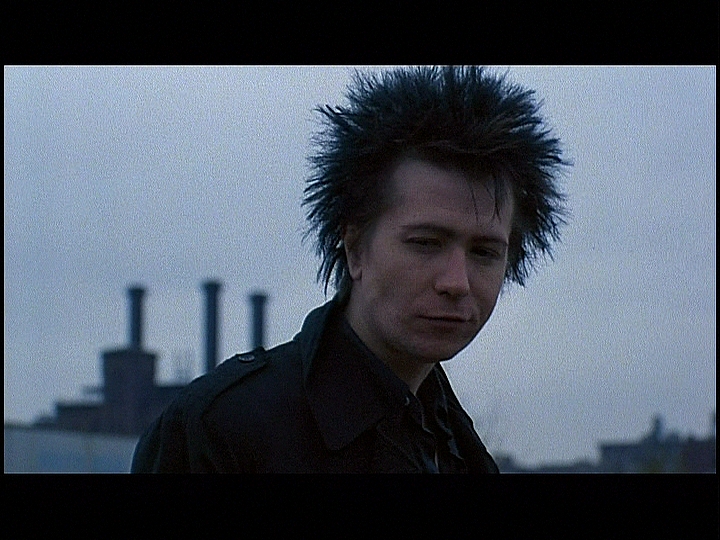