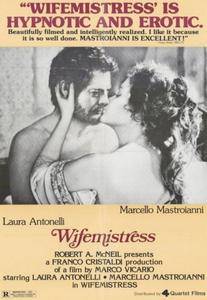 Since her husband pronounced her frigid on her wedding night, Antonia DeAngelis has been an invalid. When he disappears, she believes him dead: she leaves her bed and takes over his business, traveling to see clients. She discovers her husband's passions, his political writing, mistresses, and his indifference to the peasants on her family's land. She improves their lot, begins an affair with a young foreign doctor, and publishes her husband's writings. All this time, he's hiding from a murder charge in a house across the square. Amazed, he watches her become his sexual and social equal. After the police drop the murder charge, will he disappear, end his life, or rejoin her on new terms?