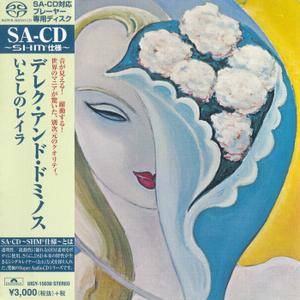 
Layla and Other Assorted Love Songs is the sole studio album by the English–American blues rock band Derek and the Dominos, released in November 1970. It is best known for its title track, "Layla", and is often regarded as Eric Clapton's greatest musical achievement. The other band members were Bobby Whitlock on keyboards and vocals, Jim Gordon on drums, Carl Radle on bass. Duane Allman played lead and slide guitar on 11 of the 14 songs.

Derek & the Dominos was a group formed by guitarist/singer Eric Clapton (born Eric Patrick Clapp) with other former members of Delaney & Bonnie & Friends, in the spring of 1970. The rest of the lineup was Bobby Whitlock (keyboards, vocals), Carl Radle (bass), and Jim Gordon (drums). The group debuted at the Lyceum Ballroom in London on June 14 and undertook a summer tour of England. From late August to early October, they recorded the celebrated double album Layla and Other Assorted Love Songs (November 1970) with guitarist Duane Allman sitting in. They then returned to touring in England and the U.S., playing their final date on December 6.
The Layla album was successful in the U.S., where "Bell Bottom Blues" and the title song charted as singles in abbreviated versions, but it did not chart in the U.K. The Dominos reconvened to record a second album in May 1971, but split up without completing it. Clapton then retired from the music business, nursing a heroin addiction.

Wishing to escape the superstar expectations that sank Blind Faith before it was launched, Eric Clapton retreated with several sidemen from Delaney & Bonnie to record the material that would form Layla and Other Assorted Love Songs. From these meager beginnings grew his greatest album. Duane Allman joined the band shortly after recording began, and his spectacular slide guitar pushed Clapton to new heights. Then again, Clapton may have gotten there without him, considering the emotional turmoil he was in during the recording. He was in hopeless, unrequited love with Patti Boyd, the wife of his best friend, George Harrison, and that pain surges throughout Layla, especially on its epic title track. But what really makes Layla such a powerful record is that Clapton, ignoring the traditions that occasionally painted him into a corner, simply tears through these songs with burning, intense emotion. He makes standards like "Have You Ever Loved a Woman" and "Nobody Knows You (When You're Down and Out)" into his own, while his collaborations with Bobby Whitlock – including "Any Day" and "Why Does Love Got to Be So Sad?" – teem with passion. And, considering what a personal album Layla is, it's somewhat ironic that the lovely coda "Thorn Tree in the Garden" is a solo performance by Whitlock, and that the song sums up the entire album as well as "Layla" itself.