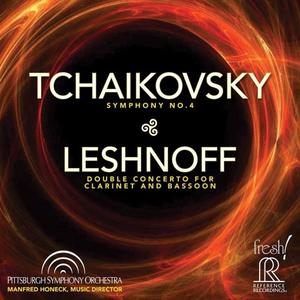 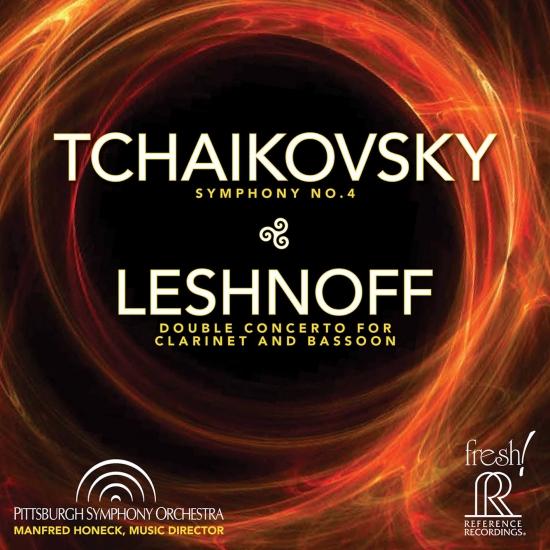 Music Director Manfred Honeck and the Pittsburgh Symphony Orchestra, with Reference Recordings, are pleased to announce the release of a new recording in superb audiophile, pairing Tchaikovsky’s iconic Symphony No. 4 with the world premiere of leading American composer Jonathan Leshnoff’s Double Concerto for Clarinet and Bassoon, featuring the orchestra’s own Michael Rusinek, Principal Clarinet, and Nancy Goeres, Principal Bassoon. This HIGHRESAUDIO release was recorded in Heinz Hall for the Performing Arts, the acoustically outstanding and historic home of the orchestra.

In this bold yet sensitive interpretation of Tchaikovsky’s masterpiece, Manfred Honeck invites us on a journey that has, “one of the most effective conclusions in all of the symphonic literature.“ According to Honeck’s notes that accompany the music, he and the musicians explore the tension and contrasts between, “darkness and suffering, but also hope and light. At once, it is on the edge of despair—depressed, hopeless, broken, melancholic and gloomy; but there is also an incredible counterpoint—courageous, self-confident, joyful, optimistic, wild and blissful.” Honeck situates the fourth symphony in an historical framework, revealing how the composer’s own life and struggles are reflected in the music—and how this context informs his own interpretation of the work on stage.

The Pittsburgh Symphony Orchestra has been at the forefront of championing new works, with recent commissions by Mason Bates, James MacMillan and Julia Wolfe. The orchestra gave the first performance of Leonard Bernstein’s Symphony No. 1 “Jeremiah” in 1944 and John Adams’ “Short Ride in a Fast Machine” in 1986.

In contrast with the last movement of Tchaikovsky’s Symphony No. 4, Jonathan Leshnoff’s Double Concerto for Clarinet and Bassoon offers lightness and buoyancy, juxtaposing the agility of the clarinet with the richness of the bassoon. In the accompanying music notes, Leshnoff says, “An important question would be how to combine and juxtapose the sprite clarinet with the heavier color of the bassoon and be sure that the bassoon stood out from the texture. …I discovered that there were some magical combinations that the clarinet and bassoon can make with each other. I found that the bassoon can be very plaintive and resonant in its higher register, and that mixing that sound with the timbre of the clarinet yields some remarkable qualities."

The Pittsburgh Symphony has a long and illustrious history in the areas of recordings and radio concerts. This release is the tenth in the highly acclaimed Pittsburgh Live! Series of multi-channel hybrid SACD releases on the FRESH! imprint from Reference Recordings. This series has received GRAMMY nominations in 2015, 2016, 2018, 2019 and 2020. The previous release, Bruckner’s Symphony No. 9, received three GRAMMY nominations. Its recording of Shostakovich’s Symphony No. 5/Barber Adagio for Strings won the 2018 GRAMMY Awards for Best Orchestral Performance and Best Engineered Classical Album.

This release and the entire Pittsburgh Live! Series are recorded and mastered by the team at Soundmirror, whose outstanding orchestral, solo, opera and chamber recordings have received more than 100 GRAMMY nominations and awards. For over 40 years, Soundmirror has recorded for every major classical label.

Reference Recordings was founded in 1976 in San Francisco, has won multiple GRAMMY awards and has a catalog that includes numerous American and international orchestras, ensembles and choruses. FRESH! Is part of Reference Recordings’ mission to encourage unique and fine artists, and to give them a strong platform for promotion and sales nationally and internationally.

Recording Details: This recording was engineered by the GRAMMY award-winning recording engineer Mark Donahue and produced by the GRAMMY award-winning recording producer Dirk Sobotka. “Based on our long experience of recording the Pittsburgh Symphony Orchestra in Heinz Hall, we chose five omnidirectional DPA 4006 microphones as our main microphone array. Supplementing those with “spot mics” to clarify the detail of the orchestration, we worked towards realizing the above goals. Extensive listening sessions with Maestro Honeck and orchestra musicians were crucial in refining the final balance. This recording was made and post-produced in DSD256 on a Pyramix workstation to give you, the listener, the highest sound quality possible,” according to Soundmirror.