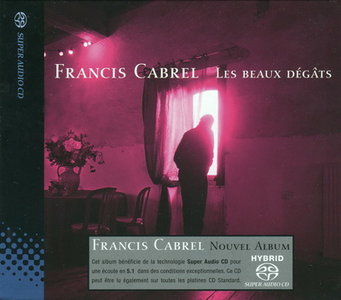 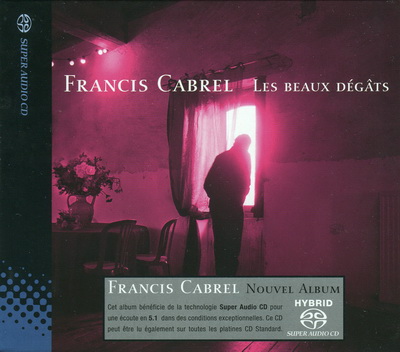 
The tenth album from the French singer/songwriter whose music is a blend of contemporary folk, blues rock, French pop, smooth jazz, & even classical.

Varied as it is, the music of Francis Cabrel never strays far from his basic songwriting tools: the acoustic guitar and gentle reflections on life. His clear voice and clean guitar are ever the focus of his songs. Around this core he weaves contemporary folk, blues rock, French pop, smooth jazz, and even classical sounds. His lyrics have received much attention among French-speaking audiences and critics, and his albums sell well in those circles. His style has also sparked a revival of interest in acoustic music in France. Cabrel's involvement in music began at his lycée (secondary school) in southwestern France. Inspired by Bob Dylan's music, he taught himself to play guitar. He joined up with a group called the Maïna Pub (later changed to les Virginys) which covered songs by the Beatles, the Rolling Stones, and Jimi Hendrix. The group eventually sublimated, and Cabrel began performing solo and working on his own material. In 1974, he entered a contest for singer/songwriters in the southwest France and walked away with first place. The stated prize was the opportunity to record a 45 single, but the judges were so impressed that they asked him to record an LP instead. The resulting album, Les Murs de Poussière, was released in 1977. Cabrel and his record company were displeased with the sound and success (respectively) of the album, but Cabrel moved to Paris and continued to perform in public. He released his second album, Les Chemins de Traverse, in 1979. The second single from the album, "Je l'Aime à Mourir," gained the attention of French listeners, and Cabrel became nationally recognized. In the early '80s, Cabrel released Fragile (1980), Carte Postale (1981), and Quelqu'un de l'Intérieure (1983); these albums generated hits and sold well in France. During these years Cabrel built an audience in Quebec also by touring both solo and with a band. Having garnered considerable success with his three previous albums, Cabrel changed his pace and approach in the mid-'80s. He released a live album (Cabrel Public) in 1984, a studio album (Photos de Voyages) in 1985 and a compilation (w-87) in 1987. He moved back to southwestern France, set up his own studio, turned more of his attention to his family, and released albums of new material at a leisurely pace. He continued this pattern in the late '80s and through the '90s with Sarbacane (1989), d'Une Ombre à l'Autre (a 1991 live three-disc set), and Samedi Soir sur la Terre (1994). Each release was greatly anticipated in France and Quebec, and all sold well. The two albums of original material (Sarbacane and Samedi Soir sur la Terre) did particularly well, and each went multi-platinum. Hors-Saison was released in 1999 following a 5-year break and Cabrel supported it with a national tour and an impressive 10-day stint at the Olympia in Paris. During the early part of the noughties, Cabrel took part in a series of concerts entitled Autour du Blues alongside international artists such as Patrick Verbeke, Tanya Saint Val and David Johnson. Following these shows his tenth record, Les Beaux Dégâts, was released in 2004. The album featured a new dynamic to Cabrel’s sound with a brass section bringing his songs to life and included a guest performance from Autor du Blues tour-mate David Johnson. Carbel returned in 2008 with Des Roses et des Orties which undertook an array of political and social issues that resonate strongly throughout the entire record. He also included a handful of French adaptations of work by Bob Dylan, Creedence Clearwater Revival and J.J. Cale.