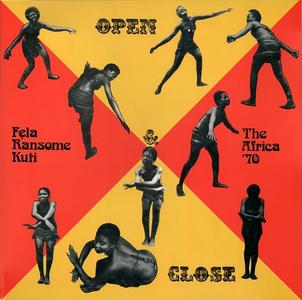 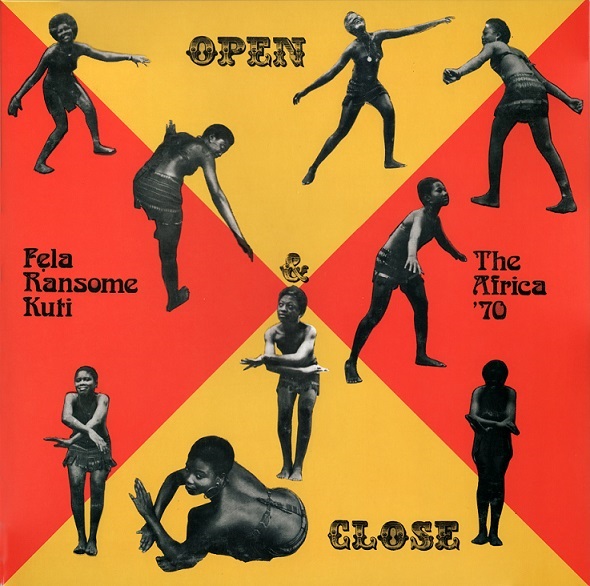 To celebrate the 50th anniversary of Fela Kuti's classic Open & Close, Knitting Factory Records is pleased to announce the first vinyl pressing since the 1980s. This edition features a return to the original gatefold jacket and will be pressed on red and yellow butterfly effect vinyl. Limited edition of 7000.

Open and Close: This song is teaching its listeners how to move Fela’s Afrobeat song called Open & Close – a dance choreography with a lot of African vitality.

Swegbe and Pako: Sung in ‘broken-English’ is about good and bad—competence and its opposite—incompetence. According to Fela, a carpenter who does not know his trade is :’Swegbe’. A tailor who sews like someone in the carpentry trade is another ‘Swegbe’. A doctor acting like a lawyer is ‘Swegbe’, same with a lawyer trying to act like a doctor. On the other hand, a carpenter competent at his work is ‘Pako’. Same with the tailor, lawyer and doctor. If you are in a position of responsibility and you do your work with competence then you are ‘Pako’. On the other hand if you do it bad you are ‘Swegbe’—If you are good you are ‘Pako’ and if you are bad you are ‘Swegbe’.

Gbagada Gbagada Gbogodo Gbogodo: Is another Folk song recounting the war gallantry of the Egbas against the colonial forces and their agents on the coasts of West Africa. The Egba war with the British colonial force was led by Abudi, a renowned Egba war general. Fela starts the song by calling on his listeners to please help him sing this folk song, Gbagada Gbagada Gbogodo Gbogodo, a tale of pandemonium caused by attacking colonial British forces. Proudly, the people went to war against the colonial British force and their coastal African allies. The resisting Egba forces believed they were not only resisting for themselves, but also for the love of their children—‘Oh! Oh! Oya oh! Eni omo wun oya kalo oh!(Meaning if you love your children! Let us go to war!)’.

Tracklist:
A – Open And Close
B1 – Suegbe And Pako
B2 – Gbagada Gbogodo