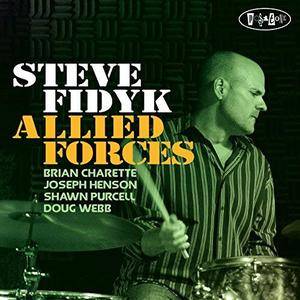 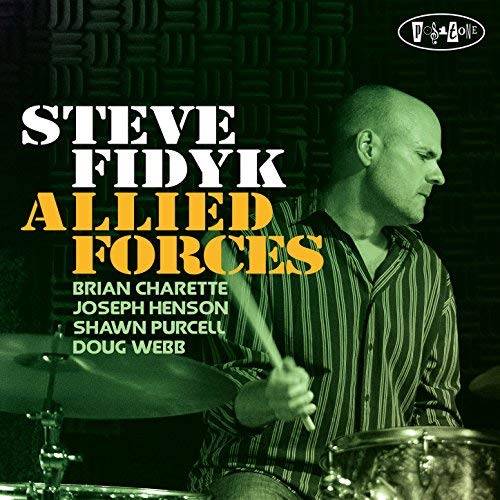 The military reference in this record's title is right on the mark. For over a quarter of a century, Steve Fidyk has held down the drum chair in the U.S. Army Blues (part of the United States Army Band "Pershing's Own"), an 18-piece ensemble that has performed America's original art form in a variety of venues throughout the U.S. and around the world. Like any great jazz trapster, Fidyk plays the role of commander in chief which is not to say that Allied Forces is a drum centric record. And speaking of commanders, check out the aphorism by General George S. Patton printed inside of the disc's booklet, amid the backdrop of marching American troops.

Fidyk excels at putting various components of the drum set in places that challenge his bandmates to dig deeper and thrive on their own terms. A keen sense of dynamics and good taste coexists with a penchant for assertively directing the action. He's equally good at generating hard, no nonsense swing in full flight, Fidyk often reminds me of Louis Hayes by executing pointed accents around the set ("Gaffe"); creating a dense cloud of sound via the crashing of large cymbals ("Food Court Drifter"); contributing to a head by gradually and ingeniously adding rhythms without upsetting the applecart ("One For T.J."); and studiously laying down straightforward time with a stick on a partially opened hi-hat ("Good Turns"). During the course of "Gaffe," there's an impressive range of emphasis in Fidyk's comping amidst solos by alto saxophonist Joseph Henson, guitarist Shawn Purcell, and tenor saxophonist Doug Webb. The leader is constantly listening, reacting, and asserting himself without ever assuming a dominant posture.

In the case of Thelonious Monk's "Evidence" and Charlie Parker's "Moose The Mooche," Fidyk's drums impact the way we hear these classic jazz compositions. His snare and toms bob and weave around Monk's melody, creating a skittish counterline before the arrangement shifts to a swinging bridge in three-four time. Playfully irreverent, Fidyk's drumming adds another dimension to the fiendishly shifty tune. While Webb and Henson swing their way through the theme of "Moose," Fidyk punches his bass drum at key points and adds a smack to the snare, briefly initiating an insistent, funk-like vibe that rapidly evolves into a straight-ahead jazz mode. The foundation of "High Five" (one of Fidyk's six original compositions on the record), a densely-textured funk-infused line in five-four time, consists of a cymbal rhythm that sounds like a baby's rattle, pitted against the insistent thwack of the kick and snare.