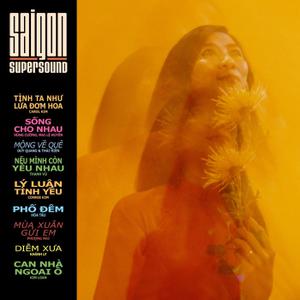 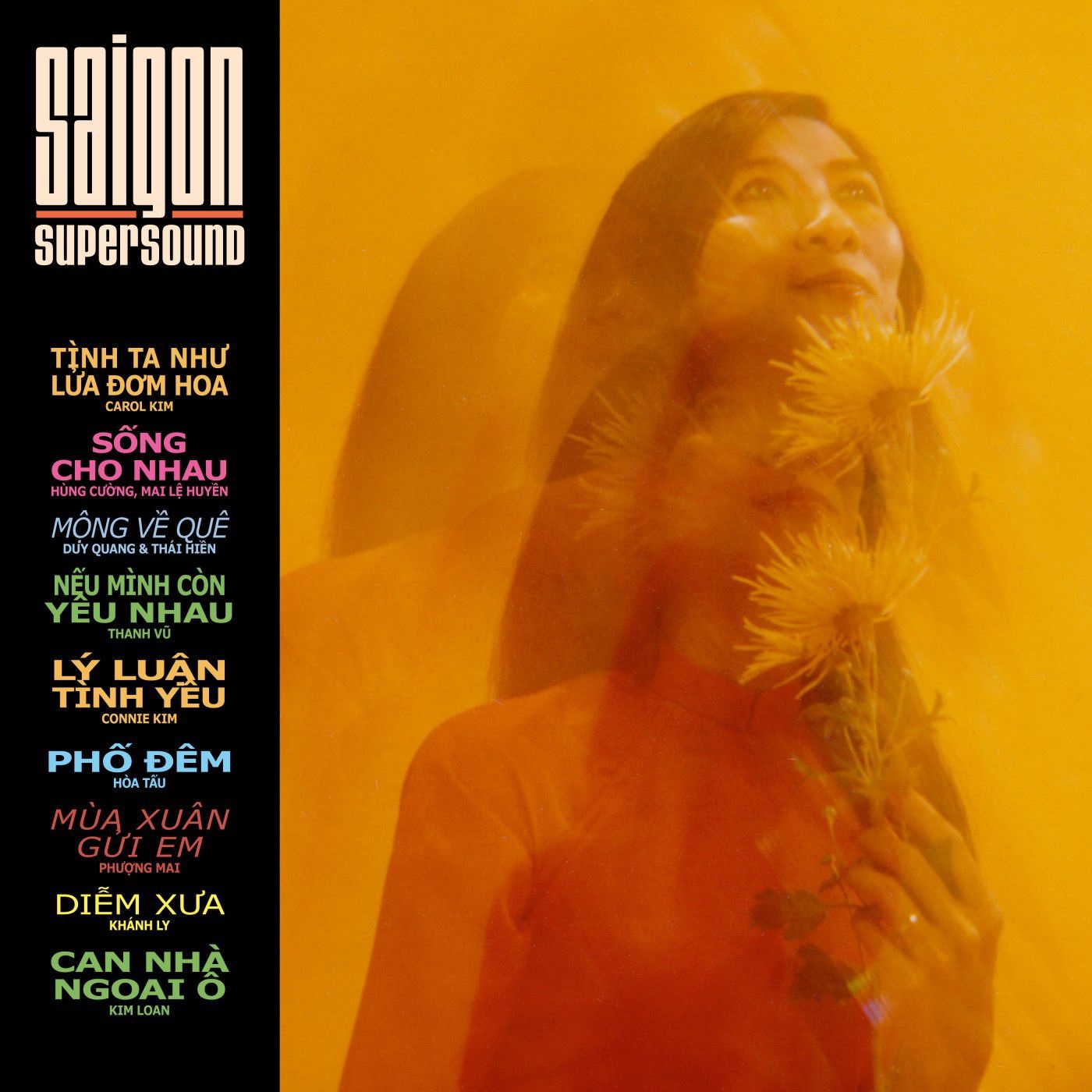 Saigon Super Sound is the story of a musical era that was almost lost. The selection of tracks is limited to the period between 1965 and 1975, the so-called “Golden Era” in the South ofVietnam, where – under difficult circumstances – a lively pop culture had developed.

The music of Vietnam in the sixties was shaped by three currents: Nhạc đỏ (“red music” or communist revolutionary music) had developed around the beginning of the 20th century in opposition to the French colonization of Indochina. It usually promoted independence, socialism and anti-capitalism in its lyrics and was the dominant genre in the communist North. These were mostly heroic songs celebrating the men and women who left their families to bravely fight against the French and, soon enough, also the US Army.

This collection focuses on the South, where under “imported” western influence a new kind of pop and rock music had developed: Nhạc Vàng (“yellow music” or “golden music”), Nhạc Trẻ (“young music”). Nhạc Vàng are poetic, often sentimental and sad love songs (Tình Khúc) as well as simple, easily accessible compositions which praised the beauty of the homeland (Quê hương). This genre had also developed since the 1920’s under French colonial influence, namely the chanson that was much appreciated by the growing Vietnamese bourgeoisie. Latin rhythms and dances such as the Bolero, the Rumba, Tango and Cha Cha Cha as well as Slow Rock were also integrated into the standard repertoire. Just a year ago I saw a large group of younger and older people dancing Tango at night, when Nguyễn Huệ street is converted into a pedestrian zone. When the Americans entered the war, they also brought rock- ́n’-roll and soul music to Vietnam which became quite influential for local artists. “Young music” (Nhạc Trẻ) was performed by newly formed bands like Dew Drop, The Dreamers, CBS Band and The Strawberry Four. There were all female bands too, such as the Blue Stars (of whom, unfortunately, no usable recordings have survived) who performed at the G.I. Clubs. They covered American rock and soul hits, translating or simply making up new lyrics in Vietnamese. Very few of these were even recorded, but many popular singers – including Hùng Cường, Mai Lệ Huyền and Carol Kim – added “imported” styles like Twist, Soul, Agogo, Surf and Mashed Potatoes to their repertoire of popular ballads.

The third, very popular form was Cải Lương, best translated into “theater music” in which pieces of music alternate with spoken word passages to form a kind of radio play. The last title of this collection, “7 câu vọng cổ chúc Tết“ gives you an idea of this genre. Its musical structure is based on a Vietnamese composition from the early 20th century, the Vọng Cổ which was (and is) very popular in Cải Lương as well as in Vietnamese chamber music.

In the 1950’s, a lively music scene began to develop in the South, mostly in and around Saigon: In addition to various nightclubs and salon de thé ́s, music labels like Sóng Nhạc, Việt Nam, Dư Âm, Nhạc Ngày Xanh, Sơn Ca, Capitol and Continental were churning out a multitude of releases, mostly on 7“ vinyl singles. These were often made from colored vinyl: yellow and red or brown and sometimes multi-colored, when the raw material became scarce during wartimes. Such a record usually featured up to four songs, often by different artists and thus can be seen as a kind of mini compilation. Individual artist albums were the exception rather than the rule. Often only one of the featured artists was visually represented on the cover. The bands were confined to the background, although they really were the backbone and constant of the entire scene. This became even more obvious with the rise of reel to reel tape recordings from the early seventies onward. From now on, most recordings were released on tape or on Compact Cassettes, and rarely on vinyl. Tape series like Song Ngọc (1-4), Trường Hải (1-14) and Shotguns were highly successful, the latter producing over 30 volumes by 1975. Shotguns was actually not a label in the classic sense, but probably the most popular “backing band“. The Shotguns played the clubs of Saigon, in front of (South Vietnamese) soldiers as well as civilians, featuring nearly all the popular singers of the era. Like the earlier vinyl singles, the tape series were also mostly compilations, not unlike the Motown principle, employing one and the same backing band for different featured artists. Well-known and popular compositions were often recorded in various versions, featuring different singers. Even the 20 volumes of the tape series “Thanh Thuý” – named after and produced by the eponymous singer – consists of compilations. The individual releases were often based on a theme… “songs for spring“ (xuân), “love songs“ (tình ca), “dance music” (nhạc khiêu vũ) or they included songs by a certain composer. The “Sơn Ca“ series constitutes the notable exception to the rule, focusing on indivdual artists in each of its eleven volumes. It also represents a more discerning approach – both musically and with regards to sound quality. The song “Diễm Xưa“ was originally recorded for the “Sơn Ca” series. It was performed by Khánh Ly and written by Trịnh Công Sơn. He is often referred to as the “Vietnamese Bob Dylan“ and – along with Phạm Duy – is seen as one of the most important composers of the South. His poetic folk tunes were anti-war songs, unlike those of many other composers who often included a pro-war message in their songs. For me personally, this is one of the strongest and most expressive pieces on Saigon Super Sound, not least because of Khánh Ly’s inimitable voice. Like the “red music” (Nhạc đỏ) of the North, the South also used music, literature and film to encourage and entertain the troops as well as tools for propaganda. The Americans ran the program under the acronym PSYOP (“psychological operations”). Of the many popular singer and songwriters who participated in the program, most left the country at the end of the war to avoid persecution.

This exodus in April 1975 meant nothing less than the end of the South Vietnamese music industry. The remaining bits and pieces were seen as “decadent” by the communists, were disgraced and maginalized and ultimately disappeared from everyday life. Records surviving from this era are often in a sad and pitiful state, heavily scratched and full of dust so deeply engrained in the grooves as to render them virtually unplayable. Even more so, since the paper sleeves were mostly burnt or recycled in the early 1980’s. Due to the lack of paper, many vinyl records were left unprotectd in dusty corners. The few records surviving in reasonably good shape are in the hands of a small group of collectors and protected like treasures. Those recordings which were originally released on tape are often more easily accessible and in better shape. To this day, the socialist government is not interested in an archival and discographical appraisal, since it had abolished “yellow music” immediately after reunification. Master tapes are non-existent. The fear that these songs might have a corrosive effect on the people of South Vietnam was just too deep-seated. “It could bring back feelings to the people” was the warning message I heard when I tried to get some background information for this project from official sources. The promotion of immoral attitudes and behavior was another aspect disturbing the new authorities, and western influences did not fit into their socialist view of the postwar world.

Nevertheless, the songs persist. Particularly among the many Vietnamese who fled their homeland these songs became classics or even hymns that were re-recorded again and again in the diaspora. At the same time – and I found this remarkable – I also met fans and collectors of “yellow music” in the North. Unlike the “red music” of the North, the music of South Vietnam in all its simplicity speaks directly to the hearts and souls of people in the city as well as in the countryside. In recent years, the old songs are finding their way back into the awareness of more and more Vietnamese, although a number of songs can still not be performed publicly. Thousands of compositions are effectively “illegal” to this day. But thanks to the internet and passionate collectors, many of these songs are now available either on Youtube or on Vietnamese websites Even some of the artists who fled right after reunification in 1975 have since returned to Vietnam or have received official permission to perform live. This development created some controversy. Within the exiled Vietnamese community, where many believe that exiled artists who play concerts in Vietnam authorized by the socialist government are actually committing an act of treason. Censorship is still omnipresent, and certain “songs of praise” commending the pre- 1975 South Vietnamese government are still an absolute “no-go”. Even today, the lyrics for each and every new song must be authorized by the ministry of culture and information before it can be recorded or performed publicly.

The selection of tracks for this compilation is a subjective sample of popular music in that era, informed – of course – by personal likes and influences. This means, for example, that I was interested in latin, rock and soul-flavored pieces which clearly show elements of fusion with western popular music.

My first direct encounter with Vietnam dates back to the year 2005. Since then, I have been fascinated by the beauty of this country and the diversity of its culture and history. When I moved to Ho-Chi-Minh City – as Saigon is officially called since reunification – for a year in 2011/12, I first discovered the music of the pre-war era. In the following years I began to research and collect more seriously, I bought vinyl singles from around the world, often several copies of the same release, just to restore or rather “rebuild” one good recording from several sources. With the help of friends in Vietnam I was able to navigate the almost impenetrable jungle of music websites. Thanks to their invaluable support and translation assistance, I came into contact with several collectors who either gave me digitalized recordings or let me record directly from their old reel to reel tapes. The best recordings from this treasure hunt were then retouched, refined and remastered in the studio for this release. And yes… a few gems remain in stock waiting to be rediscovered. I want to express my special thanks to Kim Loan who emigrated to Germany and who I met last summer. Hers is the beautiful photo which graces the cover.