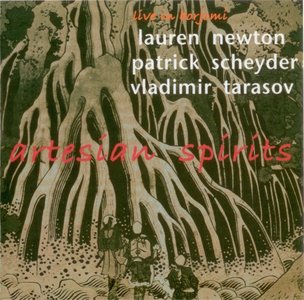 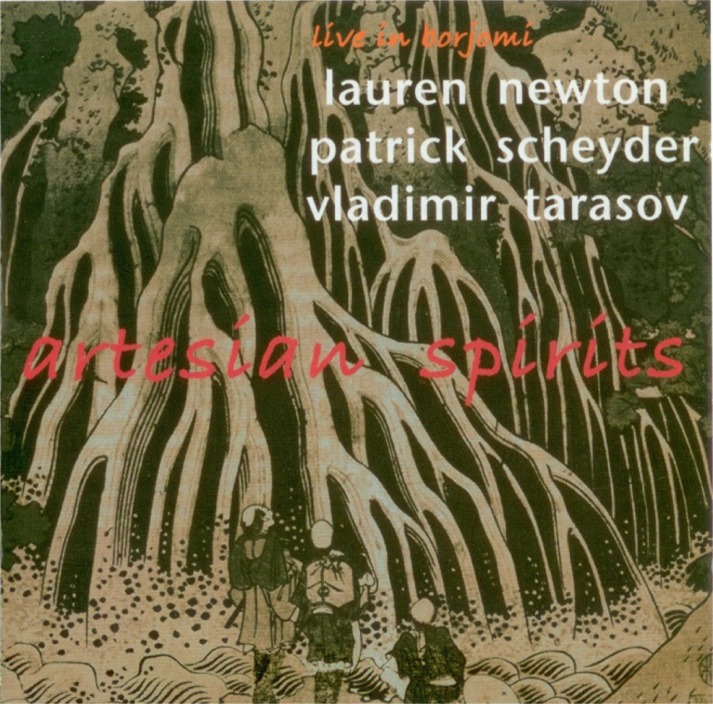 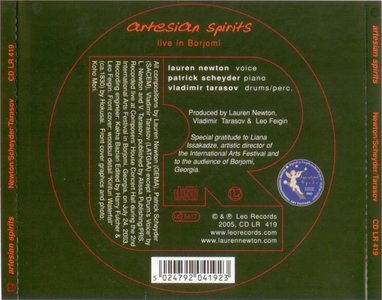 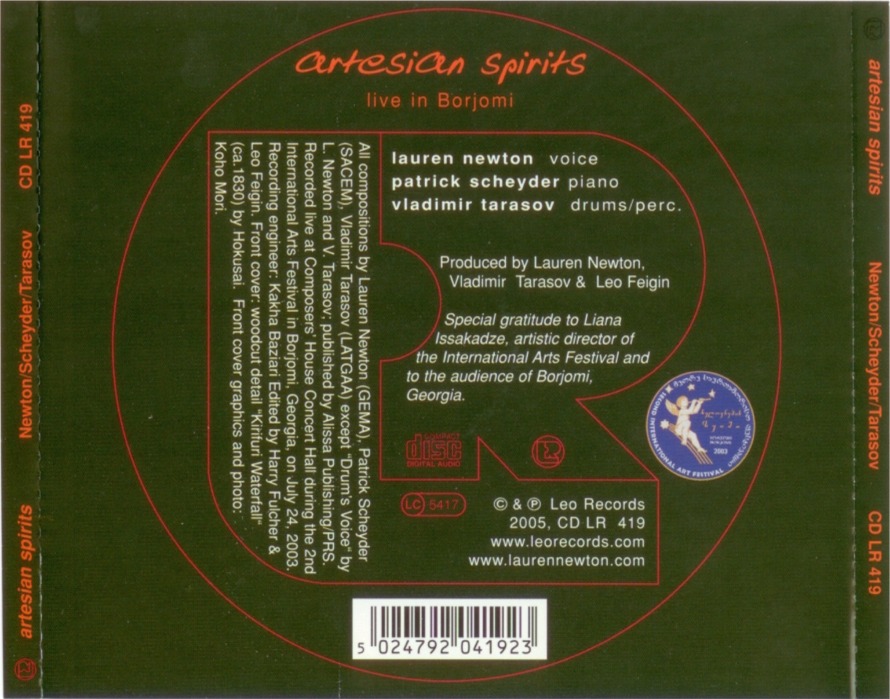 The ensemble for Artesian Spirits: drums, piano and voice. What do you expect – a few redundant standards (maybe "Stardust"), the occasional original and some scatting to spice up a smooth jazz sound? Ninety percent of the time, with this type of outfit, the answer is a resounding, "Can I close out my tab, please?" However, while they know the routine and sometimes walk the walk, Lauren Newton (voice), Patrick Scheyder (piano) and Vladimir Tarasov (percussion) defy this stereotype by crafting music that fell off the jazz fence long ago, preferring to play in the neighborhood of Boulez, Crumb and Berio.
This set is the group's live performance at an international arts festival in Borjomi, Georgia – the title Artesian Spirits reflecting the fact that Borjomi is a health spa. After a brief introduction, Tarasov launches into an extended solo that jumps between Max Roach and John Cage's early percussion work, tapping his hi-hat in time to hold together flamboyant tom work, yet slowing and quickening the pulse in a more Eastern fashion. He performs this juggling act for several minutes before dropping his dynamic to inaudible, striking a single chime from which Newton takes her cue. Her primordial offering mixes throat-singing, elegant Native American chanting and microtonal shifts and dive bomb effects; later, she tears up the track with guttural syllables, then finishes gracefully with a whisper. As a striking contrast, the subsequent "Artesian Spirits" explodes, with all three musicians shouting at the top of their lungs, then simmers into a snare roll, blinking piano ostinato and Newton's chirps. The trio maintains a solitude around pianisimo – Tarasov working in metals, Scheyder matching with higher frequencies and Newton holding her own schizophrenic conversation, eventually stepping offstage into operatic shadows. When she returns, the band launches into mania as her multiple personality disorder becomes contagious; Scheyder drops into darkened lower registers then leaps from the mire to a cartoonish frenzy.
Don't stop there – the band plunges ever-further into experimental territories. "Sulfurous Nights" begins with Tarasov scratching and jingling miscellaneous percussion while Tarasov prepares his piano, thumping the inside of the lid, muting and scraping strings and creating a "toy" sound. Newton follows suit with her own extended techniques – she wah-wahs, squeaks like a mouse and breathes as a shivering infant. She lovingly (though creepily) entices her audience with the highest notes of the performance thus far, then lulls the piece to sleep with a hum. For the final moments of closer "Phosphorus Nights", the group embraces silence as a fourth member, allowing pregnant pauses between transparent ghostlike gestures that echo the previous hour's events.
Despite the "live recording" tag, Artesian Spirits' production captures each performer's subtlest gesture, as well as the overall elegance of the set. There's just enough rawness to this sans-overdubs exercise to capture the energy of the night, furthering this crew's status as top-of-their-game performers.
Alone, each of these musicians is a legend, with teaching, composing and performing experience to intimidate the best. As they demonstrate on Artesian Spirits, when they get together, there isn't much that can stand in their way.
– Dave Madden