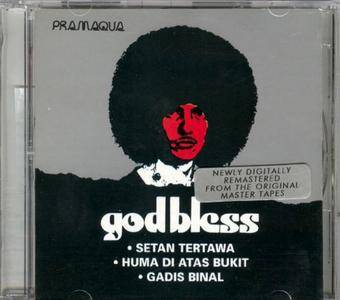 God Bless is an Indonesian rock band founded in 1973 by Ahmad Albar (vocals), Jockie Soerjoprajogo (keyboard), Fuad Hassan (drums), Donny Fattah (bass), and Ludwig Lemans (guitar). They had their first concert on 5 May 1973 at Taman Ismail Marzuki, which was followed on 16 August with the Summer 28 concert, the first (and, as of 2004, largest) open-air concert in Indonesia. During that period they also played at the Jakarta Fair, held near the National Monument. That same year the band acted in Ambisi (Ambition); Lemans left the band not long after to return to the Netherlands. In 1975 the band opened for British rock band Deep Purple when the latter played in Jakarta. They released their first album, Huma di Atas Bukit (Rice Field on a Hill), the following year.