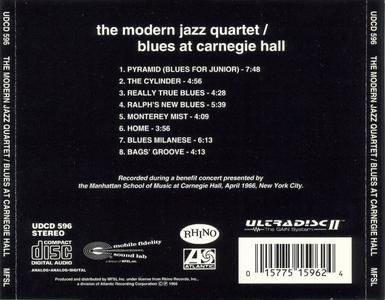 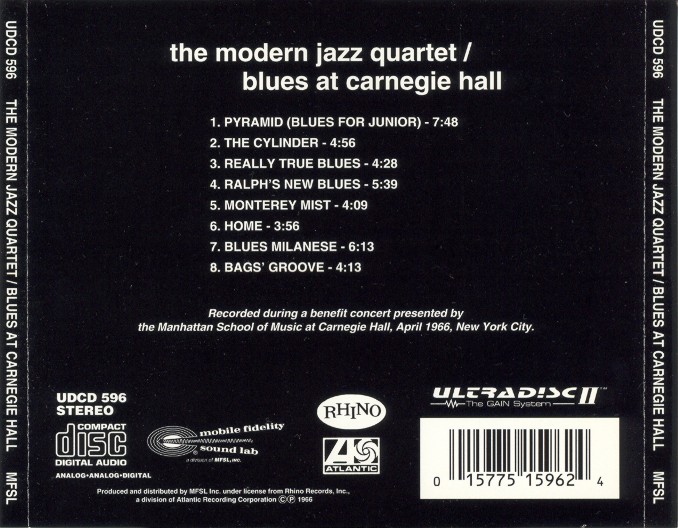 Artist: The Modern Jazz Quartet
Title: Blues At Carnegie Hall
Format: CD ALBUM
Record Label: Mobile Fidelity
Catalogue No: UDCD596
Country of Origin: USA
Additional info: Deleted - A deleted or out-of-print item is one that is no longer manufactured.
Release: January 12, 1994
Notes: Recorded live at The Carnegie Hall in 1966 as a benefit for The Manhanttan School Of Music.

The Modern Jazz Quartet was established in 1952 by Milt Jackson (vibraphone), John Lewis (piano, musical director), Percy Heath (bass), and Kenny Clarke (drums). Connie Kay replaced Clarke in 1955.
Jackson, Lewis, and Clarke had originally played together in a quartet while in the Dizzy Gillespie orchestra from 1946 to 1950. Together with Ray Brown they played during interludes designed to give the trumpeters time to recover from the challenging upper register trumpet parts. The same group recorded as the Milt Jackson Quartet in 1951.
Jackson and Lewis originally shared the role of musical director but Lewis eventually took over the entire responsibility of this position.
The group occasionally played with classical musicians, but its repertoire consisted mainly of bop and Swing era standards. Among the original compositions from the band's book are "Django" by Lewis (a tribute to the Belgian jazz guitar player Django Reinhardt) and "Bags' Groove" by Jackson (Bags was his nickname).
Jackson left the group in 1974 partly he was tired of touring, and the group soon disbanded. In 1981 the group reorganized. Their last recording was issued in 1993. Heath, the last surviving member, died in 2005.