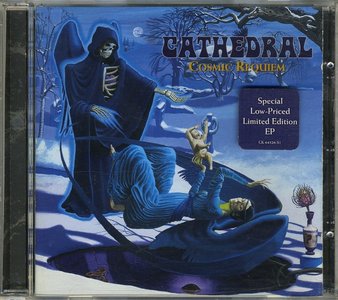 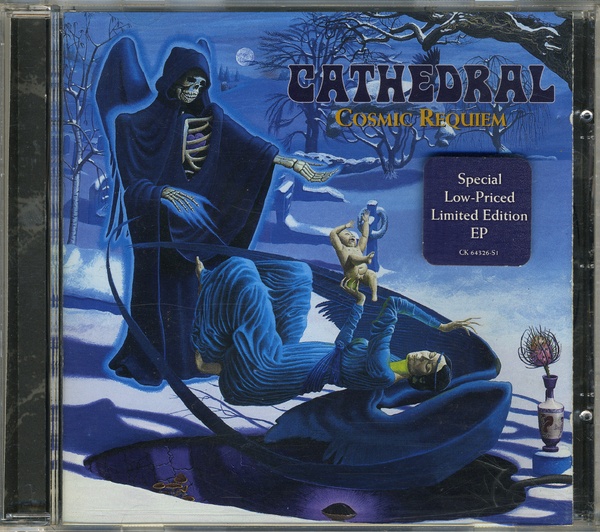 This is the album that sealed the doom deal for me. Until I discovered "Cosmic Requiem," I was on a pretty strict death metal diet. While Cathedral have nothing to do with DM, they have everything to do with that which is old school. Call them Sabbath-worship if you like, to me there is scarcely a better compliment to receive.

When the bizarre sounds of the opening riff of "Cosmic Funeral" first entered my ears I really didn't know what to think. This was my first experience with Cathedral, and it caught me a bit off guard. It sounded odd, retro, a bit cheeky, and totally British. Lee Dorrian's leather lung growl-shout was of another world, the perfect vehicle for his strange and decadent writing style. Round about four and a half minutes into the disc I found myself under full command of Dorrian's disco supernova. Lee D and crew suddenly had me learning the Martian casanova.

The interplay of the guitar and keys gives "Cosmic Funeral" a slick feel as the band jams on Sabbathian power chord slides. From the grooving, up-tempo portion of the song, I guess you could see how some uninitiated media dumbfuck would apply the oxymoronic term "disco doom," a term hated by Dorrian and co. When all is said and done, Cathedral are not a doom band, nor a stoner band, they are simply a heavy metal band. Case closed.

In 2011 are brains are bogged down with myriad sub-genres and bastardizations of the metallic sacrament. That's why I don't listen to anything new. Don't ask me what a breakdown is. I thought that's what rappers did, break it down, right? I guess it was some time in the mid to late 90s when our beautiful, puritan, poseur-slaying heavy metal was first defiled by hip-hop culture. Now we have mallcore miscreants dressed in baggy pants, side-cocked hats and short fuckin hair forming so-called metal bands. Ok. I'll digress before this rant turns into a fuckin deathwish.

Let's talk about the Rebirth of an already majestical metal song. For those of you familiar with "Forest of Equilibrium," you know the tune "A Funeral Request" is a tasty slice of British doom. The original version of this tune creeps forward at a snails pace, reminiscient of the Sab's "Electric Funeral," but on xanax. I would wager that during Cathedral's touring for FoE they experimented with increasing the tempo on that opening lick, thus lending to it a more ball-crushing, less depressive effect on the listener. "A Funeral Request (Rebirth)" merely injected a bit of adrenaline into an already stellar piece. Note the added bluesy soloing starting at 0:56 which sets up the eloquent verse quite nicely. These lyrics are borrowed from 1890s poet DP Barnitz, a writer of nihilistic verse who died of heart complications at the age of 23. There is something about the elegance of King James English that is meant for metal. "White rose perfume, go with thee on thy way - unto thy shaded tomb…"

My only gripe with this song (and with Cathedral) is the lack of double bass drums where the music absolutely calls for double bass. At 4:40 the tune picks up the pace, entering a beefy triplet rhythm. Upon first listen, and seemingly at Dorrian's urging of "C'mon!" I expected to be punched in the balls with equally beefy sustained double bass triplets, but they were nowhere to be found, leaving an unfulfilled bottom end. Perhaps drummer and multi-instrumentalist Mark Ramsey Wharton finds double bassing distasteful. His fills and pocket drumming are expert, maybe he deemed double kicks unnecessary. This complaint of mine could be due to years spent in the death metal realm where two kicks are standard issue. However, I somehow doubt that I am alone in wondering, where is Wharton's left (or right, he might be a lefty) foot? Oh well, this lack of kicks is made up for in the song's bombastic and tech-friendly 7/4 outro. Well done, boys.

Three out of four tracks and the EP is only half-over. Let the weirdness ensue with "The Voyage of the Homeless Sapien," quite an aptly-named little diddy. The track begins with lovely homage paid to "Planet Caravan," and the ponderous verse leads into a thick, down-tuned and dreary guitar line. The lyrics here provide excellent social commentary on the uselessness of mankind. This piece is set up as an eight part suite, ranging from doom to the overtly experimental to pure heavy metal mastery, chugging along until, um, well until the mushrooms kick in. We frolic in the green fields of ego loss, forget our chores for the day, even forget our names, and then, slowly, we drift back into the doldrums of reality again with a riff that sounds strangely familiar… wait a minute… is that Iron Man? Dude, are they ripping off Iron Man?? Answer: NO. This riff which awakens us from our psilocybe-slumber is not the property of Mr. Iommi but of his descendants, the very children of the grave and of the sea!

Here we have four greatly varied tracks that clock in at exactly forty-three minutes. I think I gave seven dollars and some change for this disc at the used cd shop. What a steal, man! A fine piece of obscure and experimental music which thumbs its nose at all things conventional.

Please, do not write these links at any web pages. Enjoy & keep the files alive!
* - EAC Image, standard LOG, embedded cuesheet, Foobar2000 ready
In case you encounter some dead links, please leave the comment here or send me a private message!