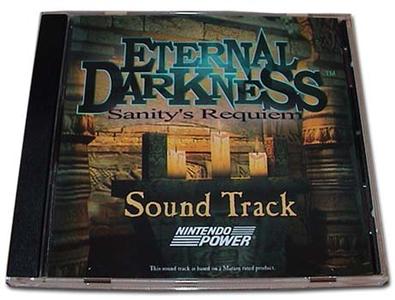 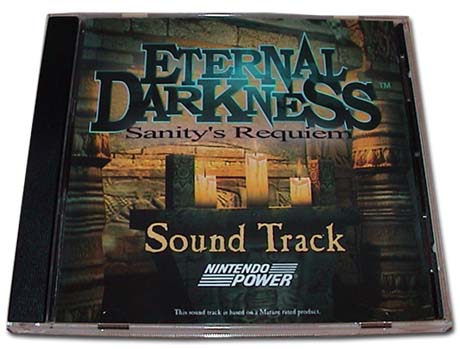 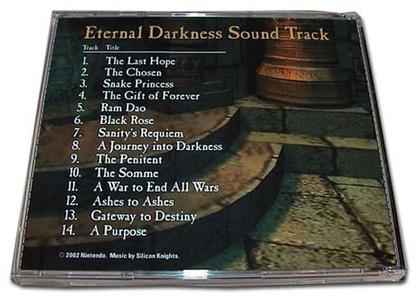 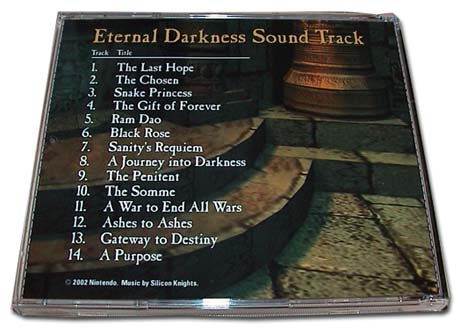 Nintendo of America offers yet another second-rate soundtrack CD release from one of its games - this time to the Gamecube game "Eternal Darkness: Sanity's Requiem". The game delivered not only some of the most amazing graphics the console had ever developed, but one of the most amazing soundtracks as well. The music and sound effects, composed by Steve Henifin, received considerable acclaim for their spooky, ambient rhythms and bloodcurdling, nightmarish atmosphere. It can probably best to say that, like the game itself, this soundtrack release will leave a powerful impact upon you.

Steve Henifin's score is constructed around the ambient melodies of Myst and Riven, with ethnic percussion and a haunting choir. While exploring the game's environments, players could almost find themselves going crazy from hearing out-of-control, sometimes dissonant dirges, or bewitched by the silent striking of a hollow drum. This isn't the sort of score you would want to hear to enjoy yourself, as it will, moments later, threaten to place you on the verge of insanity. However, this can only be a fitting compliment to the effects that this score succeeds in achieving.

There aren't many particularly memorable themes or stand-outs in the music (though some tracks do have their own melodies), but every now and then it can pull a few tricks out of a bag like a magician. It switches styles respectably, ranging from Buddhist chanting over percussive drum beats to a monastic choir to quiet yet threatening motifs. This effect is achieved so well it's almost hard to distinguish one track from the next. If the game twisted your mind, then perhaps it is best fitting that the music does the same as well.

Ironically, the soundtrack album pulls off the same effect. The track presentation is not what one would expect from a "typical" game soundtrack. The music we know from the game is there, yes, but that's not all! The compositions sound exactly like they do in the game, but there are also some tracks that I didn't remember hearing when I played twice through the game. (The buzz online is that the songs are now extended, which probably explains why I was scratching my head trying to remember where this or that song was.) Not only that, but occasional sound effect clips (bloodcurdling growling, heartbeats, raindrops, women in hysteria, etc.) as well as voice clips - including one at the beginning which I did not once encounter during my trip through the game - pop in unexpectedly. In addition, there are hardly any breaks - each track almost transitions into one another, either through sound effects or voice clips. It's almost as if Henifin was trying to do a little experiment with his songs for an album release, rearranging them and/or adding some spice to them for the sake of recapturing the mood of the game rather than forming a typical soundtrack release. The resulting concoction is an album that may come close to draining one of his or her sanity. But it works. The album, although not a typical soundtrack release, is an incredible feat that will leave one moved.

The album is available only to Nintendo Power subscribers (and yes, the packaging suffers from the typical drawbacks of Nintendo CD releases - crappy and lacking in any liner information), but if this is the only release Eternal Darkness will ever receive, then it is best for fans to go for it. Just be warned, this is not the sort of album one would want to listen to for comfort. Its dark nature will blow you out of your seat. -by Jon Turner (07/01/2003)


Tracklist
1.The Last Hope
2.The Chosen
3.Snake Princess
4.The Gift of Forever
5.Ram Dao
6.Black Rose
7.Sanity's Requiem
8.A Journey into Darkness
9.The Penitent
10.The Somme
11.A War to End All Wars
12.Ashes to Ashes
13.Gateway to Destiny
14.A Purpose