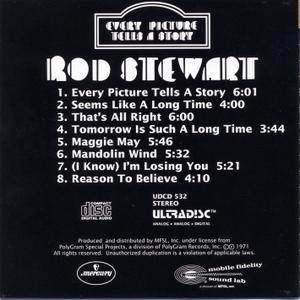 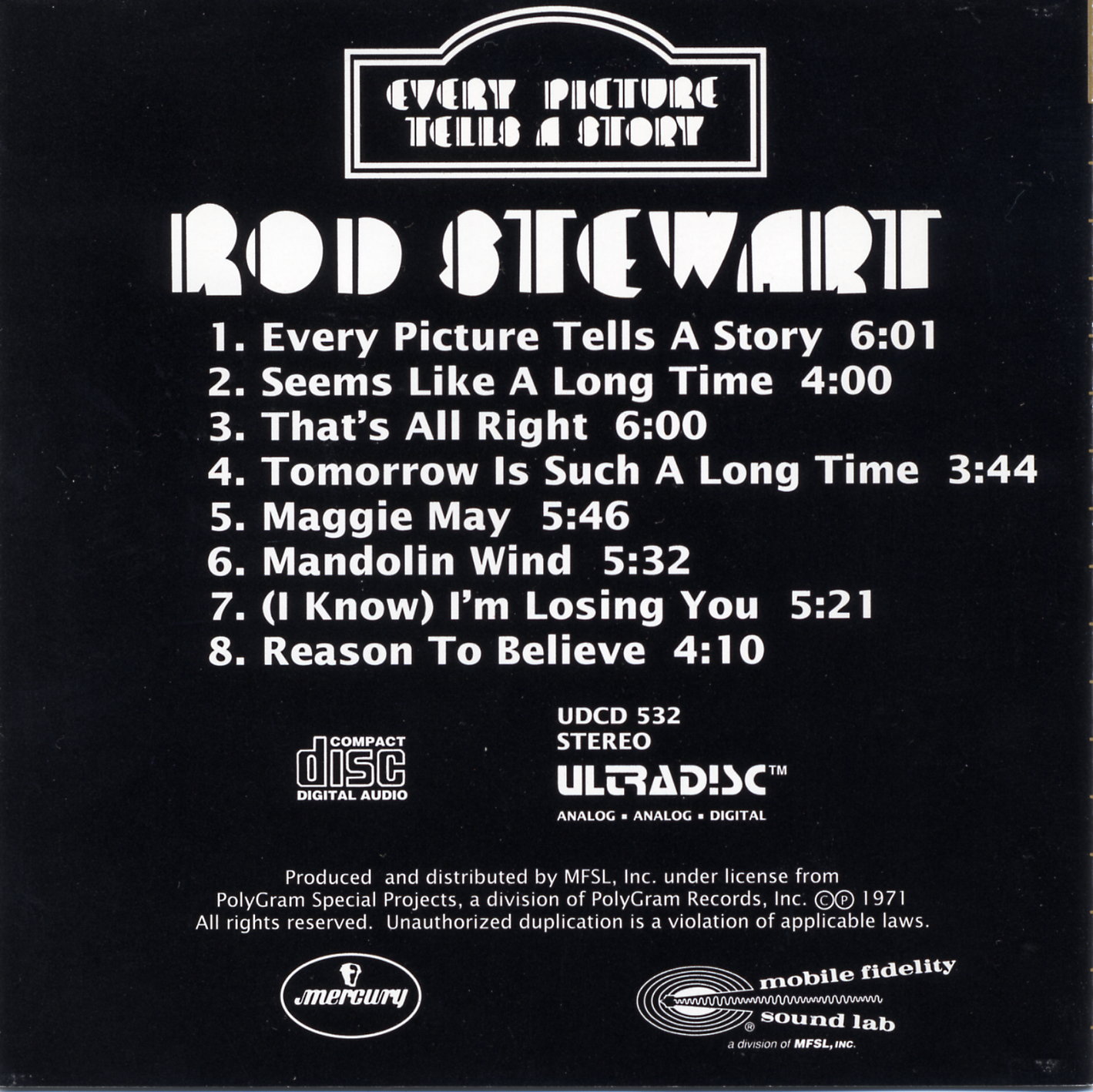 Every Picture Tells A Story is an album by Rod Stewart, first released in summer 1971. The album is a mixture of rock, blues, soul and folk, and includes his breakthrough hit, "Maggie May", co-written by classical guitarist Martin Quittenton, as well as the Tim Hardin song, "Reason to Believe". "Reason" had initially been the A-side of the single and "Maggie May", the B-side, until general reaction resulted in their reversal.
The album also included a cover of the Bob Dylan song, "Tomorrow Is A Long Time", an outtake to Dylan's 1963 album The Freewheelin' Bob Dylan. (Dylan would later officially release the song on his 1971 release, Bob Dylan's Greatest Hits Vol. II.)
In addition to members of The Faces, with whom Stewart was lead vocalist, musicians included Ray Jackson on mandolin (though Stewart forgot his name and merely mentioned 'the mandolin player from Lindisfarne' on the sleeve), and Micky Waller on drums. Maggie Bell duetted with him on the title track.
It reached the No. 1 position in both the UK and the US at the same time that "Maggie May" was topping the singles charts in both territories, making Stewart the first artist to achieve such a feat. It has often been voted among the best British albums of all time.
In 1992, the album was awarded the number one spot in Jimmy Guterman's highly subjective book The Best Rock 'N' Roll Records of All Time: A Fan's Guide to the Stuff You Love.
Every Picture Tells A Story was ranked 99th in a 2005 survey held by British television's Channel 4 to determine the 100 greatest albums of all time.
If you buy only one Rod Stewart album, EVERY PICTURE TELLS A STORY should be it.

Greil Marcus' classic book Stranded asked a number of rock critics to name their "desert island disc;" the one record they would take to the farthest corner of the world. This is mine, hands down. Rod Stewart made such a perfect record with this 1971 classic that he never really recovered. Decades later, it still jumps out of the speakers as fresh as the day it was recorded. He matched his own best songs ("Maggie May") with well-chosen covers (Tim Hardin's "Reason To Believe") that he made every bit his own. He then dressed them up with American roots music played by drunken Brits and something was found in the translation. Picture stands as rock's shining hour–at least in my book. –Michael Ruby

This 1971 album is far and away the best Rod Stewart album and one of the Top 10 albums of that decade. This was only his third album and it went to the top of the album charts both in the U.S. and the U.K., whereas "Gasoline Alley," released the previous year had only made it to #27 on the Billboard chart (it would not be until 1979 that Stewart would have another album reach #1, with "Blondes Have More Fun"). In the early part of his career Stewart managed to find interesting ways of mixing folk, rock, blues and country, both in his single career and as the front man for the Faces, who released both their second ("Long Player") and third albums ("A Nod Is as Good as a Wink…To a Blind Horse Faces") that year as well ("Stay With Me" was the big hit off of the later). So for Rod Stewart 1971 was a very good year.
The big single off of this album, of course, is "Maggie May," hit #1 for several weeks (this was the first song we played for our daughter Maggie, the day after she was born). This is one of the great songs about being seduced by an older woman. Two other singles charted, the rockin' cover of "(I Know) I'm Losing You" originally done by the Temptations, which made it to #24, and Stewart's poignant cover of Tim Hardin's "Reason to Believe," which ends the album on a quiet note and made it to #62. Then there is the exquisite "Mandolin Wind" (played by some guy Rod forgot the name of) and the frenetic energy of the title track, which lulls you into a false sense of security by beginning with an acoustic guitar part before the drums start drivin' this one hard and fast. Surprisingly, most of the songs on this one are covers, the exceptions between "Mandolin Wind" and the title track, the latter co-written by Stewart with lead guitarist Ron Wood.
Stewart exhibits a lot of range on this album and for me the only that could possible qualify as a misfire would be the cover of Bob Dylan's "Tomorrow Is Such a Long Time," which is a bit ironic because you would think that would work. "Seems Like a Long Time" is pretty good, as is the rollickin' "That's All Right" by "Big Boy" Crudup. I even love the sheet music on the "back cover" ("It's Full of Good Things and Loads of Suggestions"). As far as I am concerned if your choice is between this and a Rod Stewart "Greatest Hits" CD, get this one because it is all downhill for Stewart from this point on. –Lawrance M. Bernabo