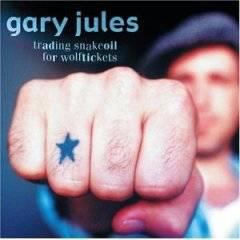 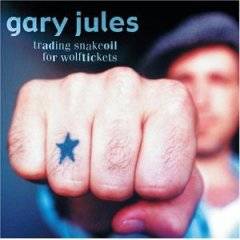 San Diego based singer-songwriter Gary Jules was brought to the world's attention with his haunting cover of Tears for Fears' "Mad World", but Trading Snakeoil for Wolf Tickets may surprise fans expecting more of the same. There is a strong sense of West Coast country-tinged folk, with pop influences drawn from the Byrds, intelligent prose from Simon & Garfunkel and a velvety drawl from somewhere between James Taylor and JJ Cale. The plucked guitar of "No Poetry" is as beautiful as anything Taylor has produced; it could be perceived as derivative but Jules is expressing his song in the most appropriate way, and it fits the melody perfectly. The abbreviated "DTLA" ("Down Town Los Angeles") is more of an up-tempo number introduced by an analogue drum machine that swaggers in a country fashion befitting the fond imagery in the lyrics. The rest of the album follows a similar path except for the Michael Andrews collaboration "Mad World", which sits awkwardly at the end. Having the big single so far removed from the rest of the songs may seem risky but Trading Snakeoil for Wolftickets has enough merit without "Mad World" to show Jules is no one-hit wonder.