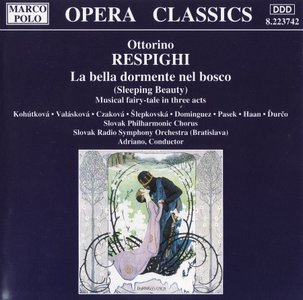 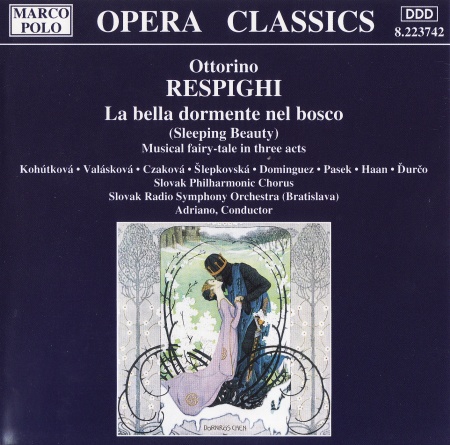 The 1689 fairy-tale of Charles Perrault, La belle au bois dormant (Sleeping Beauty), inspired Tchaikovsky to his famous ballet exactly two hundred years later and in 1901 provided the subject of an opera for Engelbert Humperdinck. Both these works were conceived for adult performers. Respighi's opera on the same subject calls for an ensemble of puppets and is addressed to young audiences. It became so successful in his own lifetime that, with his ballet La boutique fantasque, it heads the group of his most frequently performed stage works.

In the 1920s Vittorio Podrecca's puppet company I Piccoli was very famous, and not only in Italy. After attending a performance in London an enthusiastic George Bernard Shaw seemed to prefer Podrecca's wooden actors to real ones and Respighi too expressed the opinion that it was a joy to work with actors one could pack away into a box after rehearsal, so that they could not bother one with complaints and gossip, as their flesh and blood colleagues do.

On 13th April, 1922, La bella addormentata nel bosco was given its first performance at the Teatro Odescalchi in Rome. The conductor was Respighi's pupil Renzo Massarani and the production, which held the stage in Podrecca's company for over twenty years, toured to Turkey, Greece, Egypt, Bulgaria, Russia, Canada, Australia and Japan. For London performances the soprano Cissie Vaughan, a pupil of Adelina Patti and Ruggero Leoncavallo, was engaged. She presumably sang the parts of the Nightingale / Blue Fairy, the actual principal role of the opera, rather than that of the Princess.

In November 1933 Respighi completed a new version of his childrens opera, now called La bella dormente nel bosco, at the request of the Teatro di Torino, and conducted the first performance on 9th April, 1934. This was acted in mime by some hundred children, while singing and speaking parts were heard from the orchestra pit, as they had been in the earlier performances in Rome. Since the manuscript of the first version has been lost, there is no chance of comparing it with its revision, but it is known that for the original orchestration Respighi had commissioned his pupil Vincenzo di Donato. The 1933 manuscript score used for this recording can, therefore, be considered the composer's authentic version, as revised and orchestrated by himself for a larger symphonic ensemble rather than for the reduced forces of Podrecca's theatre.

Respighi conducted his fairy-tale opera in an RAI Torino broadcast of 13th April, 1934. Further productions followed from the same station in 1937, under the direction of Armando La Rosa Parodi, and in 1939, under Alfredo Simonetto. Again for RAI Torino, Elsa Respighi prepared aversion of La be/1a dormente nel bosco for a concert broadcast of 13th June, 1967, under the direction of Arturo Basile. This version contained a number of unpardonable cuts and a newly composed and rather questionable rock'n roll finale by Gian Luca Tocchi. This performance has been preserved on a pirate LP by Anna Records. In other words, La bella dormente nel bosco has never been seen on the operatic stage, although such a staging would be valuable, with music and singing parts that are of considerable interest. There may be reservations about the libretto of Gian Bistolfi, but appropriate staging can easi1y overcome any such difficulties. In today's repertoire there are many operas, serious and comic, that have libretti far worse than Bistolfi's.

The music of La bella dormente nel bosco, which Respighi described as an innocent mockery of contemporary melodrama, is quite a revelation, containing a synthesis of the composer's stylistic versatility while revealing his musical sense of humour, which ranges from the most forthright to the most refined parody. The composer clearly had it in mind to pay homage to musicians then in fashion, to Wagner, Massenet and Debussy (not only with Mr Dollar's Cakewalk), Puccini and Stravinsky. It is obvious that such subtleties cannot reach every audience, especially the younger, but unprepared listeners may find pleasure, nevertheless, in the opera's appealing and generally romantic fairy-tale score. Contemporary critics discovered, welcomed and even overrated the composer's few marks of homage to Wagner in the Prince's journey to the castle (Siegfried's Rhejnfahrt), in the Green Fairy's melodrama (Freia's motif rather than Erda's) and in the waking scene of the Princess (Brünnhilde's), not to mention the suggestion of Die Meistersinger in the Doctor's scene. In addition to other marks of homage, particularly those to Puccini (as clearly in the final love-duet), since Respighi never talked in detail about his work, we can presume that there may also be quotations and references, the result rather of intuition than intention from an eclectic mind. What is important in this apparently lightweight piece is that its goal has been fully reached in a score that displays incredible spontaneity, sensibility, melody and thoroughly virtuosic instrumentation.

To write La bella dormente nel bosco Respighi had interrupted his work on his comic opera Belfagor. It is suggested that the perceptive listener might well discover in this less pretentious work some premonitions of Belfagor and others, like the Frog's scene at the beginning, that already take us to the forest of La campana sommersa.

La bella dormente nel bosco can be heard in the present recording in its complete form, except in the case of the finale, from which a minuet of 37 bars has been omitted. The present writer found it appropriate to take seriously the courtiers' chorus invitation to celebrate spring-time as in nouveau style by moving forward directly to the concluding Fox-trot, thus finally ignoring the seventeenth century music. A short-score fragment of a Tango, preceding the Fox-trot, has been found and the present writer would have been delighted to orchestrate it, had it been complete. As far as the inclusion of occasional chorus applause and cheering, cats' miaowing, gong-striking and a few changes in some of the spoken dialogue is concerned, the present recording called for even more of such extra theatrical effects.

The opera requires a modest orchestra of seven wind instruments, strings and percussion, with additional piano, celesta and spinet (or harpsichord). Like Richard Strauss in Ariadne auf Naxos, where four wind instruments are doubled, Respighi achieves incredible things with a small ensemble. The fifteen singing and two speaking parts were originally taken by no more than ten performers, as on this recording. This does not mean that the casting of the Blue Fairy / Nightingale should be underestimated: the role is a challenging one, for a coloratura soprano. The two lyric parts of the Princess and the Prince also make their demands, particularly in the final duet.