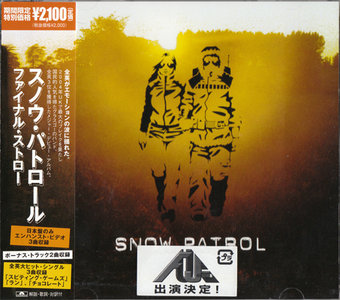 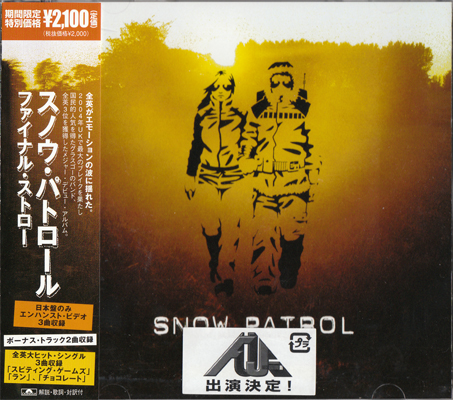 With Final Straw, Snow Patrol mainman Gary Lightbody seems to take all the inspiration he's gathered from the superstar collaborators in his Reindeer Section project and bundle it into a series of earnest bombastic rock ballads. Producer Garrett Lee deserves credit up-front for expanding the band's sound even further from the lush symphonic grandeur of When It's All Over We Still Have to Clear Up. Here, Lightbody and his cohorts traverse the same anthemic territory as Idlewild, with guitars cranked to the max. But where his friend Roddy Woomble of Idlewild soars all over the map vocally, Lightbody prefers the immediate and somewhat indifferent vocal style of another friend, Aidan Moffat of Arab Strap. Indeed, much of Final Straw feels like a middle ground between these two bands, if not for the violins, xylophones, and percussion Lee layers into the mix. Thanks to extra ornamentation, "Gleaming Auction" steps into the swirling realm of Rollerskate Skinny, as wobbly dynamics add interest to punishing guitars. If one gets the sense that Lightbody is shuffling through influences, ranging from all of the above-mentioned bands to Radiohead, Coldplay ("Somewhere a Clock Is Ticking" seems to be a more rocking cousin to Coldplay's "Clocks"), and even Pink Floyd (on the unmistakably Dark Side of the Moon-influenced "Same"), his mastery of mood and adherence to harmonies make for a consistently coherent and compelling 40 minutes. Highlights include the throbbing cacophony that is "Wow" and "Spitting Games," which seems like a cascading Wall of Sound feedback-free descendant of My Bloody Valentine. Final Straw is another strong slab of emotion and invigorating energy from a solid band that mixes its influences into an always heady sonic libation. allmusicguide

Snow Patrol are an alternative rock band, with members from Northern Ireland and Scotland. Formed in Dundee,[1] they now are based in Glasgow. The band's first three records, the EP Starfighter Pilot, and the studio albums Songs for Polarbears and When It's All Over We Still Have to Clear Up, were commercially unsuccessful and were released by independent labels Electric Honey (for their first EP) and Jeepster (for their first two albums). When the band moved to a major record label Polydor Records, they released their 2003 album Final Straw which crossed 4x platinum sales in the UK.[2] This was the band's first taste of mainstream success. The songs "Run", "Chasing Cars" and "Signal Fire" became hits. The band achieved worldwide success with 2006's Eyes Open, which sold 4.7 million copies worldwide. Snow Patrol have been nominated for three BRIT Awards and have won five Meteor Ireland Music Awards. Worldwide, the band have sold over 7 million albums.wikipedia