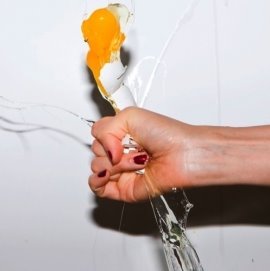 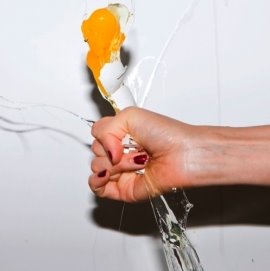 Never content to stay in one musical place for very long, the Yeah Yeah Yeahs take their restlessness to the limit on It's Blitz! — and wind up making some of their most contented-sounding songs along the way. As if to prove one more time that they're not just the architects of New York's early-2000s rock renaissance, Karen O, Nick Zinner, and Brian Chase strip away the guitars and explosive dynamics of their early work even more thoroughly on these songs than they did on Show Your Bones. In their place are shiny keyboards, synthetic sounds galore, and a very different kind of energy powering this music than any of their previous work. It's Blitz!'s images of a woman's hand bursting an egg and fleshy tomatoes and mushrooms spread across an otherwise empty pizza box are surprising, immediate, and strangely sensual, and that goes double for the actual music.

The album's first three songs are a blitz of bliss, especially "Zero," which kicks things off with blatantly fake beats, revved-up synth arpeggios, and O's command to "get your leather on." Radiating joy and confidence, she and the rest of the band couldn't be further from Show Your Bones' introspection as the song climbs to more ecstatic heights. "Heads Will Roll" shows just how ably the Yeah Yeah Yeahs blend their rock firepower with dance surroundings, as Zinner's prickly guitars get equal time with spooky synth strings and O makes "you are chrome" sound like the coolest compliment ever. Meanwhile, "Soft Shock"'s dreamy, almost naïve-sounding electronics make O's vocals — which are much less affected throughout It's Blitz! than ever before — feel that much more natural and vulnerable. Elsewhere, the Yeah Yeah Yeahs and producers David Sitek and Nick Launay find other ways to shake up the album's sound, from the disco kiss chase of "Dragon Queen," which features Sitek's fellow TV on the Radio member Tunde Adebimpe on backing vocals, to "Shame and Fortune," which pares down the band's tough, sexy rock to its most vital essence and provides Chase and Zinner with a showcase not found anywhere else on the album.

However, It's Blitz!'s bold moments are a bit misleading: the album's heart is often soft and searching, offering some of the Yeah Yeah Yeahs' quietest work yet. This approach doesn't always work, as on the too-long "Runaway," but when it connects, the results are gorgeous. "Skeletons" is luminous with an oddly Celtic-tinged synth part, and "Little Shadow" is so gentle and reflective that it could have appeared on that Karen O solo album that never materialized. Best of all is "Hysteric," a love song about being happy with someone rather than trying to make him or her stay, which feels like the mirror twin of "Maps." The serenity in It's Blitz!'s ballads feels worlds apart from Show Your Bones in a much less obvious way than the album's outbursts. But between its violently happy songs and its softer ones, It's Blitz! ends up being some of the Yeah Yeah Yeahs' most balanced and cohesive music. (AMG)