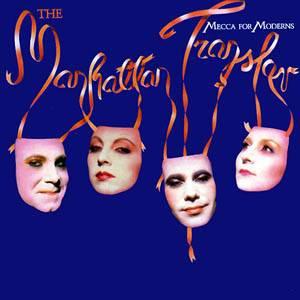 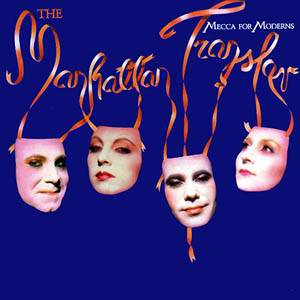 
Mecca For Moderns was the highest charting album for The Manhattan Transfer, peaking on Billboard's Top Pop Album charts at #22. The album also helped The Manhattan Transfer make music history by becoming the first group to win Grammy Awards in both the pop and jazz categories in the same year. "Boy From New York City" became their first top 10 hit, reaching #7 on Billboard's Hot 100 charts. The song also won them the Grammy for "Best Pop Performance by a Duo or Group with Vocal." "Until I Met You (Corner Pocket)" earned them a Grammy for "Best Jazz Performance, Duo or Group." The song "Spies In The Night" also charted on Billboard's Bubbling Under charts, peaking at #103.

So how did they come up with the name, Mecca For Moderns? Tim was at Janis' home one afternoon and he picked up a Duke Ellington album entitled Live At The Blue Note 1952. While reading the cover, he noticed it said "The Blue Note was a haven for the smart set, in fact, the real mecca for moderns." The group liked the phrase, and it fit well with the album concept. Janis adds, "A mecca is a paradise. We are presenting all different types of songs that are hopefully a paradise to your ears. Modern people are becoming more eclectic. They are listening to all different types of music."

"We rode the creative wave with Jay Graydon," says Alan. After successfully producing Extensions, the group worked with him again on Mecca For Moderns. Jay's talents as a producer helped The Manhattan Transfer explore themselves as individual artists within the group. Even though they chose a wide array of material for the album, the album has a definite contemporary feel. Tim commented, "When different people from the group get more involved creatively, then you start to see visibly how the influences start to change. It makes it seem like it's real different, but it's just that each one of us is coming out more." One thing that is easy for the listener to forget when hearing the group sing is that while they make what they do seem easy, the songs are often difficult. Their talent makes it look easy - an example is "A Nightingale Sang In Berkeley Square," which was arranged by Gene Puerling and won the "Best Vocal Arrangement" Grammy in 1981. Jay says, "One of the most difficult things to do is to get four people to sing in tune with no pitch reference. This song posed such a problem. What we ended up doing was to have the Transfer sing down the song without "punching in" for a "guide track" and without worrying about finite pitch problems as to just have a good feeling guide. They could barely hear this track in the earphones when doing the performances to different tracks and it was used mostly for "phrase starts" and when to take a breath as well as a slight pitch reference. I would then have them sing the song all the way down about 20 times on different tracks and I would keep notes on each line with a grade scale of 1 to 10. 9 and 10 scores are keeper lines. After the 20 performances, I looked at my notes and had the group repair trouble spots by punching in and out on many tracks. After about 8 hours, I had all the necessary elements to 'combine' all the performances to one master track. This process took about another 8 hours to 'bounce' as to achieve a seamless master track without any noticable 'punches.' A day later, the group started the process again for 'the double.' This time, they heard the combine much louder in the earphones as to tune up to it. 20 tracks again under the conditions mentioned above. The next day, a few solo vocals were added. The Transfer work very hard to achieve good pitch and feel. This method of 'no pitch guide' is rare." Jay also added "If you try to play piano or whatever along with the track, the pitch center will drift, but very pleasantly," in what he refers to as "ear candy land." Alan adds, "Jay and I continued our writing with "Spies In The Night" and "Smile Again."

Janis' favorite cuts are "Corner Pocket" and "Kafka." In an interview at the time the album came out, she said, "The most fun we had was cutting 'Corner Pocket,' because we sing that type of big band vocals very naturally." Alan commented that "Count Basie's 'Corner Pocket,' with words by Jon Hendricks, is in the traditional big band style. It's wonderful!" Cheryl added her thoughts, saying that "It was incredible, listening to the original, hearing all the horns, and then putting them into voices."

"Kafka," according to Janis, " was the culmination of several sessions with Bernard Kafka, a Polish vocal arranger." Tim explains further: "Bernard wrote this piece that's like European jazz. European contemporary jazz is like fusion, there's that element of fusion in it, there'd that rock element. It doesn't really sound like anything else." Bernard was recommended to TMT by their friend Jon Hendricks. "We heard a tape of Kafka's work," says Janis, "and we were very impressed. It was our first venture into a wordless type of singing." Today when asked about the song, Janis remembers that "Steve Gadd blew us away on "Kafka."

Tim also discussed the recording of Charlie Parker's "Confirmation." "We've gotten really deeper and deeper into the be-bop feeling by doing this song, which is the first Charlie Parker piece we've ever recorded. For anyone who is familiar with Parker, he used to blow a lot of notes in a very small space, so when we're singing that real fast, we've got a lot of notes that have to be fit in the harmony into little spaces."

Alan commented on the song that takes the group into a different style, "On The Boulevard." "It actually is a change for us because instead of having a lot of harmony in the song, the basis of the song is canon work, like feud-work where one melody starts and ends by other melodies coming underneath. At one point, there's three melodies happening at one time, instead of having harmonies and chords happening all the time. "On The Boulevard" was written for us."

A good summation of this album appeared in the Mecca For Moderns tour book. "…a diversity of material done with perfection, quality and panache." Well said!