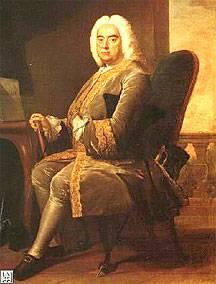 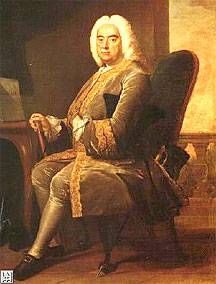 Born in Halle (50 miles from Eisenach, Bach's birthplace) in the same year as Bach, Handel studied with Zachau, and became a friend of Mattheson. In 1703 he was appointed violinist-composer for Hamburg's German opera. Handel sojourned in Italy in 1706 where he met Corelli, and both Scarlattis (Alessandro and Domenico). His return to Hanover, four years later, was to assume the post of Kapellmeister to the Elector (soon to become king George I of England). In 1712 Handel moved to London where, upon the accession of the house of Hanover, two years later, he gained immediate access to the royal circle of England. In 1717 Handel succeeded Pepusch as chapel master to the Duke of Chandos. Handel's London years were occupied primarily with the writing of Italian operas. After suffering a stroke and the failure of his operas (largely because of the success of the Beggar's Opera), Handel wrote oratorios, including "Messiah" (1741). Handel's eyesight failed him in later years and he eventually became completely blind. In addition to operas and oratorios, Handel wrote Psalms, motets, anthems, passions, cantatas, instrumental chamber works, and works for keyboard (primarily harpsichord).
In 1719 Handel returned to his birthplace, Halle, for eight days. At that time Bach lived in Cöthen, twenty miles away. Bach's admiration for Handel is evident from his having copied, with the help of his wife, a passion and other works by Handel. Knowing that Bach wanted to meet Handel, Prince Leopold lent Johann Sebastian a horse. For reasons that remain a mystery, the meeting never took place. Spitta indicates that Bach's admiration for Handel was not reciprocated.

In one of the curious ironies of music history, both men would be afflicted with cataracts in their old age and undergo surgery at the hand of the same oculist, John Taylor. By today's standards, this surgery was extremely crude, and any improvement to the visual impairment would have been minimal at best. It involved physically shoving the cataract-covered lens back into the eyeball in an attempt to allow a little more light to enter. (Bach would die from septicemia induced as a consequence of contaminated instruments). As this surgery was done without anesthesia, the courage and physical constitution of both men must have been amazing! Bach owned a copy of Handel's Brockes Passion, "Armida abbandonata" and the Concerto grosso in F minor. Thematic similarities in some of Bach's cantatas suggest that he may have been familiar with Handel's opera, "Almira". Handel is mentioned in a letter (1775) from Carl Philip Emanuel to Forkel as one whose works his father had especially valued in later years.