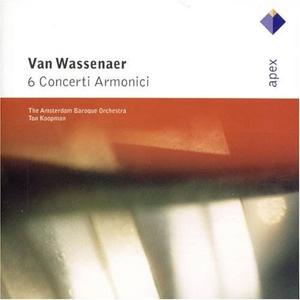 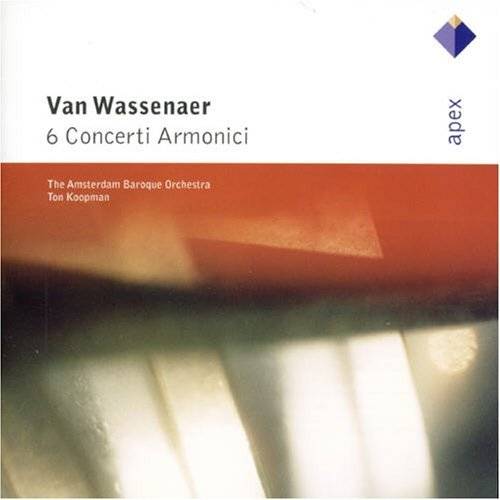 Wassenaer, Unico van: 6 Concerti Armonici, The Amsterdam Baroque Orchestra, Ton Koopman
Classical | 1988 | OGG | ~300Kbps | 58`15 | No cover
Count Unico Wilhelm van Wassenaer (1692-1766), the composer of the beautiful music on this recording was unknown for over two centuries. This was not through bad fortune, but rather because the author took active steps to remain anonymous. Before it was established that the Dutch nobleman Count Unico Wilhelm van Wassenaer was the creator of these works, they were attributed to the Italian Carlo Ricciotti, before being included and renamed Concertini in the Collected Edition of Pergolesi. For over a hundred years these Pergolesi Concertini have been enjoyed and performed, bringing great credit to that composer. Indeed, when Igor Stravinsky wrote his Pulcinella suite and made use of the music of Pergolesi he included a Tarantella based on the last movement of Concerto No.2.

Unico Wilhelm, Count of Wassenaer, was born on 2nd November, 1692, into one of the oldest noble families of the Province of Holland, the seventh child of the family, although only five survived to adulthood. He spent his early years in the family house in The Hague and the Castle of Twickel. His father Jacob

van Wassenaer (1645-1715), however, served as ambassador of the Dutch Republic to Berlin (1699- 1702) and to the court at Düsseldorf (1707-1709). Whether or not Unico Wilhelm joined his father is unknown. From 1710-1713 he was a student of law at Leiden University. The family obviously moved in the highest circles, for in April 1714 the Castle of Twickel was visited by the Elector of Hanover, who paid another visit in 1727, this time as the crowned king of England, George I. At his father’s death Unico Wilhelm inherited the Twickel estate and the title of ridderschap (knighthood) of Overijssel. Shortly after this, as was the custom, the young nobleman embarked on his Grand Tour. Although his itinerary is not known, typical routes included Paris, Italy, perhaps Rome, Florence and Venice, Vienna, and Prague.

Although no formal records exist to show that Unico Wilhelm was a student of music, we can see from his later life that he was an accomplished musician. We can only begin to contemplate what were the effects to a musically inspired youth of growing up in court and the stimulus of the Grand Tour. The court at Düsseldorf had associations with Agostino Steffani, Arcangelo Corelli, Attilio Ariosti, Antonio Draghi, and George Frederick Handel. We know too, the contents of the Count’s library. Included were dramatic works by the French composers Destouches, Lully and Campra, as well as instrumental works by Handel, Bononcini, Corelli, Telemann, Tartini, Geminiani, Locatelli and Senaillé. Many of the works were copied in Unico Wilhelm’s own hand.

After leading the relatively carefree early life of an aristocrat Unico Wilhelm was married in 1723 and had three sons. He assumed diplomatic appointments as ambassador in Paris (1744) and in Cologne (1746), while he represented The Netherlands at the Congress of Breda. He died on 9th November, 1766, and was buried in The Hague.

Learning the craft of playing an instrument or composition were recognized pastimes for many aristocrats. King Frederick the Great of Prussia, who played the flute and employed a host of composers in his court is a famous example. It may be, however, that in other circles it may not have been seemly for an important diplomat to be associated with music. Whatever the reason, Count Unico Wilhelm van Wassenaer chose to obscure his authorship of the six Concerti armonici. In 1740 an edition of the concertos appeared in The Hague. The pieces were dedicated to Willem, Graff Bentinck, a childhood friend of Unico Wilhelm. The dedication was made by Carlo Ricciotti, a violinist and later director of the French opera company in The Hague on behalf of the composer, described as a ‘distinguished gentleman’. In 1755, the London publisher Walsh reprinted the Concerti armonici. This was before the days of copyright and publishers of different jurisdictions often reprinted music from their rivals. In the London print, Ricciotti was elevated to the position of composer. They remained popular in England for some time. In 1822 William Crotch made a transcription for harpsichord of the second concerto, but was insightful enough to realise that the name Ricciotti was ‘said to have been assumed by an Italian nobleman (track 8)’.

In 1908 the Library of Congress in Washington purchased a nineteenth century copy of the concertos now renamed as Concertini and attributed to Pergolesi. In 1979 the musicologist Albert Dunning was dining with a party of Dutch art historians. After a chance remark concerning the Concerti armonici a fellow diner mentioned how he had just come across several musical manuscripts while making an inventory of the contents of the Twickel castle in The Netherlands. Dunning tracked down what turned out to be the Concerti armonici in the hand of Count Unico Wilhelm van Wassenaer. The musical world can be thankful to him for his tireless efforts in this regard.

The six Concerti armonici are difficult to classify into any genre. As we have seen Unico Wilhelm van Wassenaer took in many influences throughout his life and Grand Tour. The tone is undoubtedly Italian, in the tradition of Corelli, but it is the variation of style between movements that sets the Concerti armonici apart. Unico Wilhelm had an obvious understanding of texture and may have refined these compositions over years. Were they party pieces for himself and the violinist Ricciotti? These works are concertos for four violins, with the first and second violin parts shouldering much of the musical burden, but what also sets them apart is that as well as the four violin parts, the texture can rise to seven-part writing with equal parts also for the viola, obbligato cello (track 3) and continuo. The style is often a mixture of late baroque or Galant (track $) and early baroque in the style of simple fugues. In the manuscript the composer frequently writes notes to himself. Of the third movement of the first concerto he writes: ‘Ce morceau est un peu trop long’, and of the last movement of the second concerto: ‘L’allegro suivant est trop uniforme’. This suggests that Unico Wilhelm van Wassenaer was not just a part-time musician, but a serious composer, a matter that may be left to the listener to discover for himself.