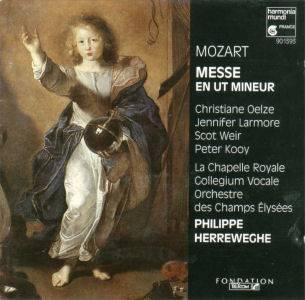 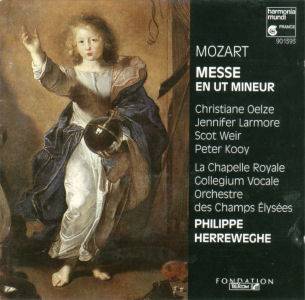 Herreweghe covers the Kyrie's opening with dark strokes, the devotional gloom giving way to a radiant soprano solo, here sung by the pure-voiced Christiane Oelze who discreetly blends the operatic flair of Mozart's writing with the piety of the text. Oelze is impressive throughout; her intimate singing draws the listener into the music, irresistibly so in the marvelous Et incarnatus est. Jennifer Larmore takes the second soprano part. Her darkish mezzo means that the usually blended ensemble singing of two light-voiced sopranos is replaced here by a strongly contrasted duo. That may disturb some, but I can't see how anyone can be immune from responding to the beauties of their duet in the Domine Deus or in the trio of the Quoniam.

The Mass is preceded by the brief Meistermusik with men's chorus, whose role was dropped when Mozart reworked the piece a few months later into the purely orchestral Masonic Funeral Music. The sound is up to today's standards. This disc belongs in the small handful of recommended recordings of Mozart's "Great Mass". [3/10/2006]


Have a look at my many previous AvaxHomeuploads at My Blog