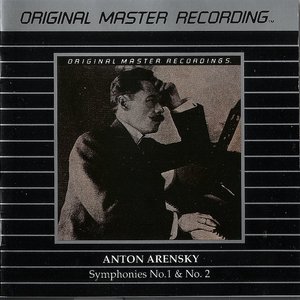 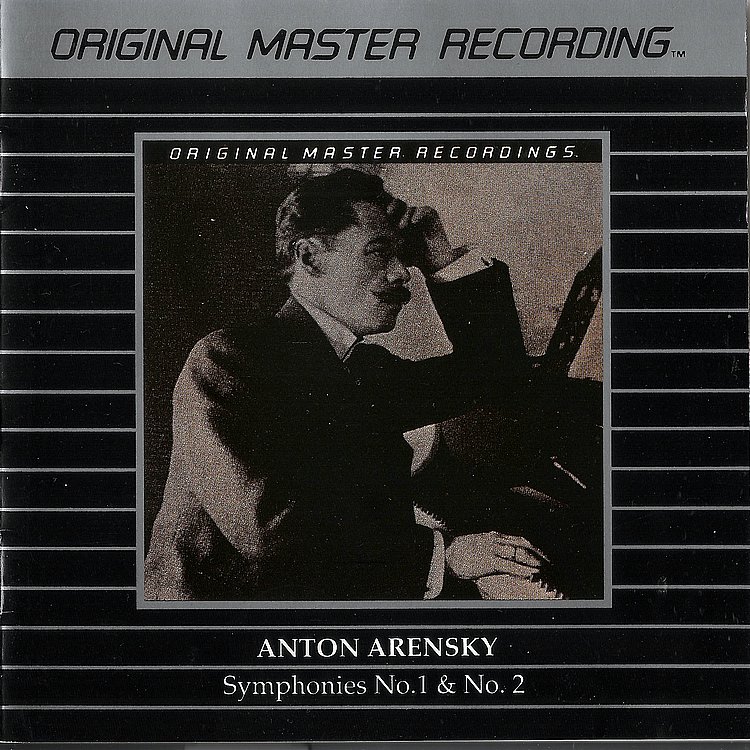 Symphony No. 1 op. 4 is an early work, composed in 1883 when Arensky was 22 and had just been appointed at the Moscow Conservatory. It shows a composer in full mastery of his craft, with a fine knack for melody and orchestration. The robust and dramatic scherzo with its sweet and mysterious middle trio, and the colorful and rambunctious finale sound exactly like Rimsky could have written them. The liner notes contend that the deep cello melody which forms the basis of the second movement is evocative of Rimsky's "The Snowmaiden", which may be true, but I also hear strains in that profound lyricism that remind me of Tchaikovsky. And it is Sibelius' Finlandia that the Symphony's remarkable opening gesture - explosive bass and threatening brass - shortly calls to mind, before settling into a style and a variety of moods that again seem to straddle the line between Tchaikovsky and Rimsky.

Symphony No. 2 op. 22 was written in 1889 and starts with more Rimsky - some moments are strikingly Scheherazade-sounding, but the more lyrical moments are not so far from the same in Tchaikovsky. It is formally interesting as it slows down and calms down and, at 6:29, goes on without break into the slow movement - introduced by a noble horn melody over brooding accompaniment by the lower strings, ugain unmistakably Tchaikovskian, and continued with an plangeant cantilena by solo cello. The scherzo is quaint and a bit soppy and would be suitable for a ballet movement in tutu. Again the powerful finale veers between Rimsky and Tchaikovsky, as if Arensky was trying to establish a channel of communication between these two composers who hated each other's guts.

The recording dates are not given. They were originally made by Melodiya and licensed by Mobile Fidelity in the early years of the CD (the CD was released in 1988). Great sound. I have no other version compared to which I can assess the merits of Svetlanov, but given his credentials in that kind of repertoire, I'm enclined to think that his readings are authoritative. The same recordings were reissued in 1995 by Vox and are available cheap (Arensky: Symphonies Nos. 1 & 2 but I don't know how the sonics compare) and they are now available with all the other Arensky recorded by Svetlanov (which includes the three orchestral suites and various overtures) on Warner's Arensky 3-CD set in their Svetlanov collection: Arensky: Symphonies Nos. 1 & 2; Variations on a Theme of Tchaikovsky. 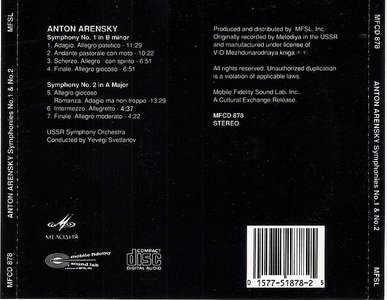 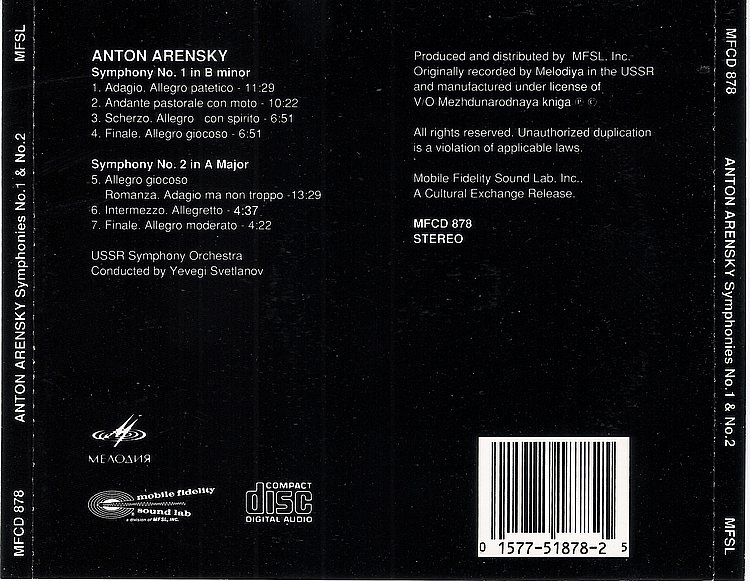