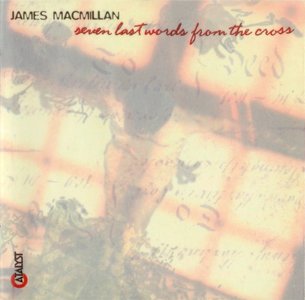 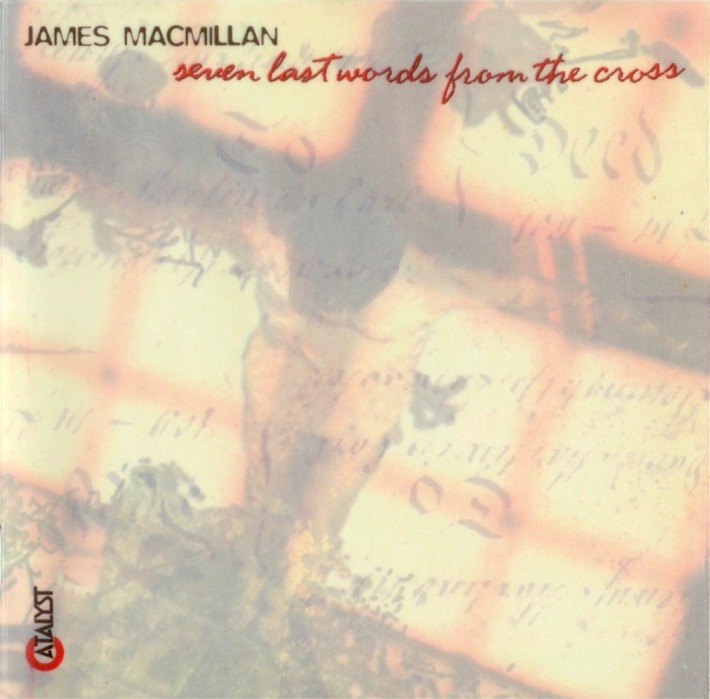 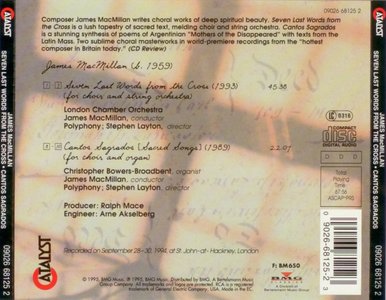 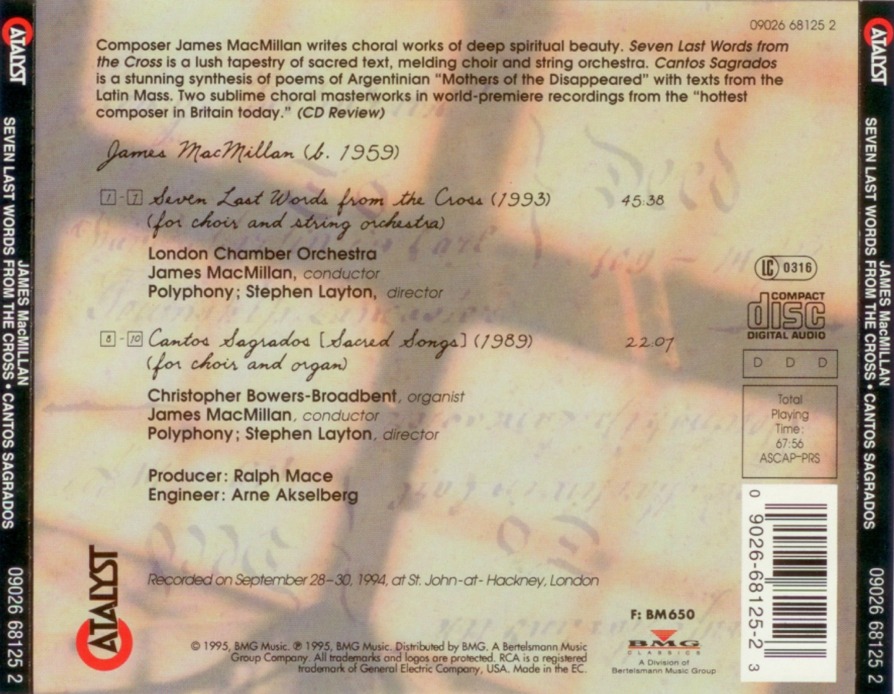 Tracklist:
1. Father, forgive them, for they know not what they do
2. Woman, Behold thy son!… Behold thy Mother!
3. Verily, I say unto thee, today thou shalt be with me in Paradise
4. Eli, Eli, lama sabachthani (My God, my God, why have you forsaken me)
5. I thirst
6. It is finished
7. Father, into Thy hands I commend my Spirit
8. Identity
9. Virgin of Guadelupe
10. Sun Stone

Religious subjects attract contemporary Scottish composer James MacMillan. Listening to the Seven Last Words, I asked myself whether it was better to write a bad poem about the mystery of Christ than a good poem about a Jabberwocky. MacMillan, with good reason, has been lumped in with the Holy Minimalists. The Seven Last Words, in seven movements, uses harmonic and rhythmic near-stasis and repetition to evoke eternity. When you pare down your technique, your basic musical ideas had better command interest. This happens for MacMillan only occasionally. Most often, the ideas do less summoning of visions than allowing the listener's mind to wander. I found myself most often thinking about MacMillan's technique than caught up in whatever emotion he wanted me to feel. The fifth movement, "I Thirst," typifies the whole. Crucial to a minimalist composition is knowing when to move on and when to stop. The music, despite a crescendo here and there (meant to goose the emotional level), is pure aural benzocaine. More drawn-out gesture than musical progress, it goes on three minutes short of forever. If heaven's like this, put me down for an afterlife of pure oblivion. For me, the third movement comes off best, a beautiful setting of the hymn "Ecce lignum crucis." Here, MacMillan writes something that actually bears repeating, although, for some reason, it reminded me a lot of Puccini - certain turns of melody and ornament, I think, as well as a comparatively lush ensemble sound. I don't intend to mock MacMillan's beliefs. His music seems painfully sincere. If only sincerity were enough.
The composer leads the London Chamber Orchestra in a performance where every note burns intensely. This, as well as the composer's ill-judged repetition of weak ideas, leads to listener fatigue. It's the equivalent of being the object of a hard stare for 45 minutes. For heaven's sake, blink! Polyphony's trebles suffer from slight intonation problems, a dull tone, and mushy diction.
Cantos Sagrados improves on everything - a work filled with blood rather than angel juice. MacMillan protests against the death squads and the "disappearances" of the politically inconvenient of Latin America. An object in the here and now apparently galvanizes MacMillan's creative pulse. The composer sets poems by Ariel Dorfman and Ana Maria Mendoza (in English translation) and juxtaposes these with Latin liturgical texts. A woman claims the body of an executed unknown as her own son so that the police cannot dispose of him, to the "Libera animas." An Indian convert asks the Virgin of Guadalupe how she could permit the slaughter of her tribe, as voices intone the "Salve Mater coeli porta." A soldier in charge of a firing squad asks the prisoner to forgive him, and the Credo's "Et incarnatus est de spiritu sancto" pierces "the body with light," to quote Dorfman. Sometimes the Latin juxtaposition sparks irony, at others invokes Liberation Theology. The suffering Christ is the central image. The music is savage, angry, yearning, and at times transcendent. To me, this is the great religious work of the two. The other in comparison seems as pious as a prayer breakfast.
Polyphony does better here as well. The diction could improve, but that's a quibble. We have a committed performance, again led by the composer. The organist, Bowers-Broadbent, provides edgy, even thrilling accompaniment in a part that owes at least something to Messiaen.
Steve Schwartz