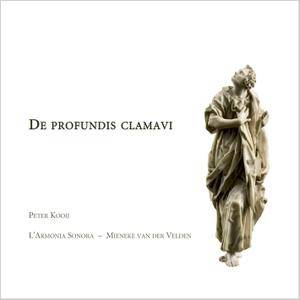 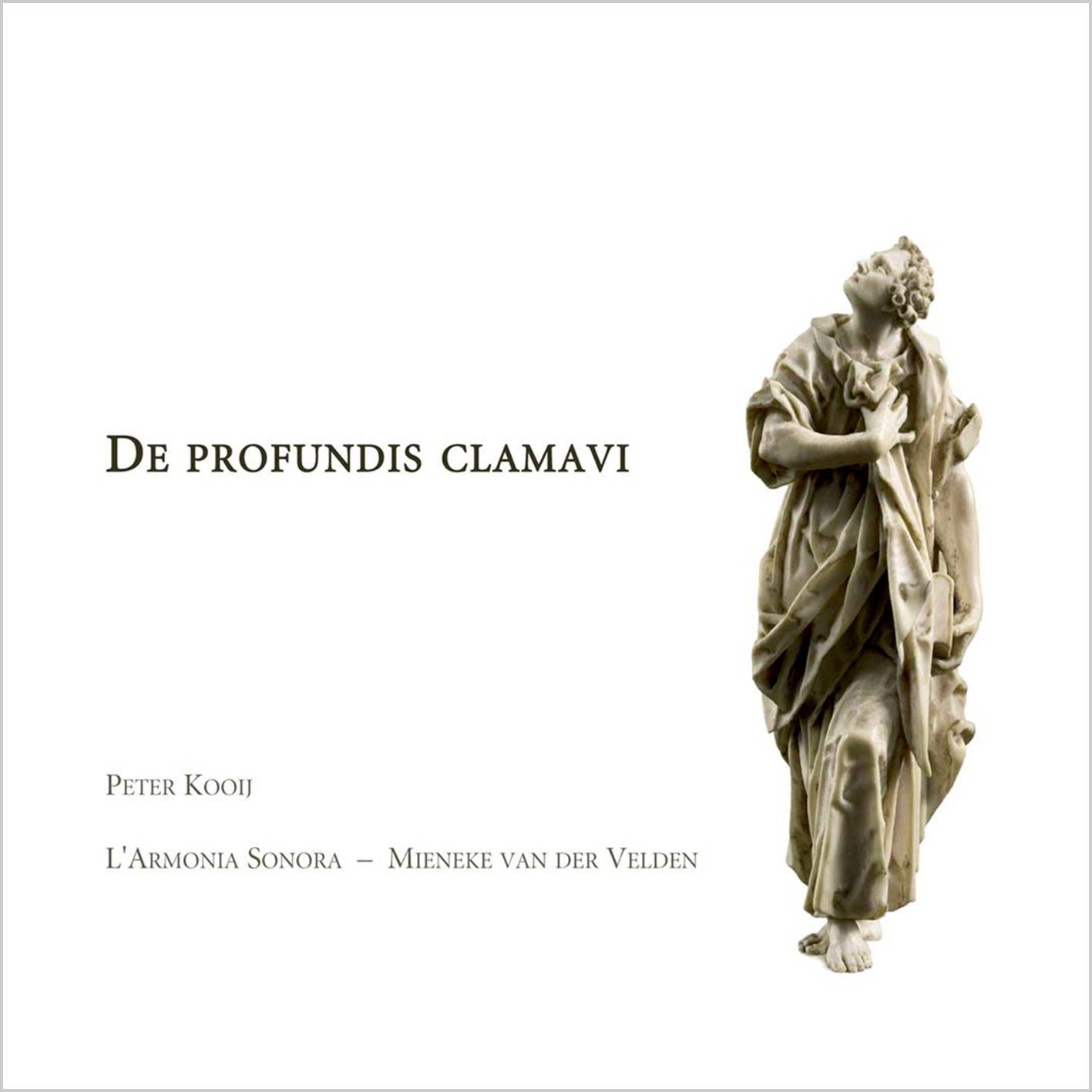 This is a gem of a CD. It's a well-chosen, well-performed and well-presented anthology of mid-Baroque German sacred cantatas.

Bass Peter Kooij and the seven-person L'Armonia Sonora are directed by gambist Mieneke Van der Velden. They have a close and warm affinity not only with one another, but also for the music; it's music as varied as it's beautiful. Its rich, sustained sonorities will stay with you long after you have finished the uplifting experience of listening to the CD. Released on the enterprising Ramée label De profundis clamavi comprises seven sumptuous examples of the music written in the north German Länder in the period after the Thirty Years War. It's music which not so much 'reflects' that profound conflict, as is 'affected' by it – weighed down with detached regret and unselfconscious resignation.

The essential tension of these laments and imprecations is between the immense demoralization after the ravages of so long and bloody a period of destruction, and the determination embodied in personal quests for direction which the Reformation had first offered in northern Europe a century earlier. To the benefit of us later listeners, the composers represented on this disc drew on a certain irrepressible faith. They built on a timely yet humble sense of the enduring place of their own spirits in responding musically to the destruction, however supplicant their apparent position in the face of loss and misery. It's tempting to find parallels with the phenomenon of Terezín and the amazing courage and perseverance shown by those who sublimated into music the immense suffering of the Nazi death camps. There is really no joy, nothing upbeat, little brightness in these geistliche Konzerten. Yet one is uplifted, as one is with Shostakovich's most bleak work; and by the calm furthest reaches of Mozart's last acknowledgments of his divine. This is, then, music of profoundly troubled souls where catharsis and empathy provide measured resolution, not Messiaenic ecstasy.

But it's not gloomy music either. That's one of its strengths. The performers here neither dwell on the anguish nor attempt spuriously to squeeze an impassioned response from us. All the emotion is in the music. It just has to speak for itself. Which is a great gift of Kooij: neither avuncular nor over-resonant, this lucid, steady singer, who will be best known for his participation in the Suzuki/Bach Collegium Japan Bach cantata project, is a firm guide throughout. Yet one who can also stand back and observe as the depths open up. Listen, for example, to his plaintive 'ganz allein' in J C Bach's Wie bist Du – empathetic, not pathetic; yet poignant.

What also stands out in the playing of L'Armonia Sonora, of whom it is to be hoped we'll hear much much more, is not only the untrammeled beauty of their string sound, but also their meticulous attention to those aspects of the music which were – paradoxically – liberated by the same Reformation doctrine which is generally perceived otherwise to have stultified artistic expression into pious conformity. In the case of these compositions, working in the fresh and fast flowing stream of the stile nuovo, full flood is given to exciting and colorful ways in which such techniques as contrast, dialog, decoration and extended line could best support the all-important text. Sound in its own right; not mere accompaniment… listen to the obbligato about half way through Wie bist du, for example. Indeed the Buns Latin setting is overtly Italian in musical style. It was, of course, on these happy syntheses that J S Bach built a generation later. How well the accomplished musicians in L'Armonia Sonora do this job and how effectively they complement Kooij. The music is alive and fresh: witness certain passages towards the the end of De profundis itself (the longest piece on the disc); they verge on the operatic.

But none of these splendid performances is out to achieve the several differing impacts it makes on the alert listener by shock. The embracing sense of spiritual certainty comes from a kind of justified pride: seventeenth century musicians had been given a new role, an important one, and they were going to live up to the confidence placed in them by doctrinal changes. That is how all of these performers reach out to their listeners here. They appeal over and above any purely interpretative role to our appreciation of beautiful sound. And Kooij's articulation of the text is so precise, his intonation so clear because this is work where it was important as the century progressed to assist the laity in the vernacular. If these intentions are met – and they are – the whole becomes, in every case, music in its own right. You only have to hear the celebrated Lamento sopra la morte Ferdinandi III, richly decorated, heart-in-mouth rhythmic complexities and cat-and-mouse instrumentation; it's no dry homage, but remembers the composer-Emperor 'as he would have wanted to be remembered'.

Other pieces here – the Biber and Weckmann, for example – make marvelous use of the then still contentious polyphonic developments which eventually became so typical of the period. But, again, the music is secondary to the text. And in the hands of these musicians that balance is achieved so well – chiefly by scooping quiet and elegantly competent virtuosic flesh out of a potentially rhetoric-encumbered shell. All utterly natural.

The spiritual center point of this recording, if it not De profundis, is surely Geist's Es war aber an der Stätte, a setting of the burial of Christ from Saints John and Matthew: it raises to new heights the aria as a medium for devout personal meditation – again as was eventually developed in J S Bach's cantata arias. The playing is touching, lambent almost, and the singing intricately sympathetic and present.

The booklet that comes with De profundis clamavi in a neat 'digipak' is informative, easy to read and contains all the texts in German or Latin, English and French. The recording is well-balanced and clean. All of these pieces except the last are available in one format or another elsewhere; but to have them collected in one place and thus so nicely contextualized is a plus. All in all, this is a CD to be sought out and treasured. In addition to the fact that it should stimulate further research into other works of the composers whose music is gathered here, each piece satisfies in its own right. Warmly recommended, very warmly recommended. 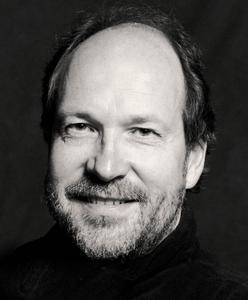 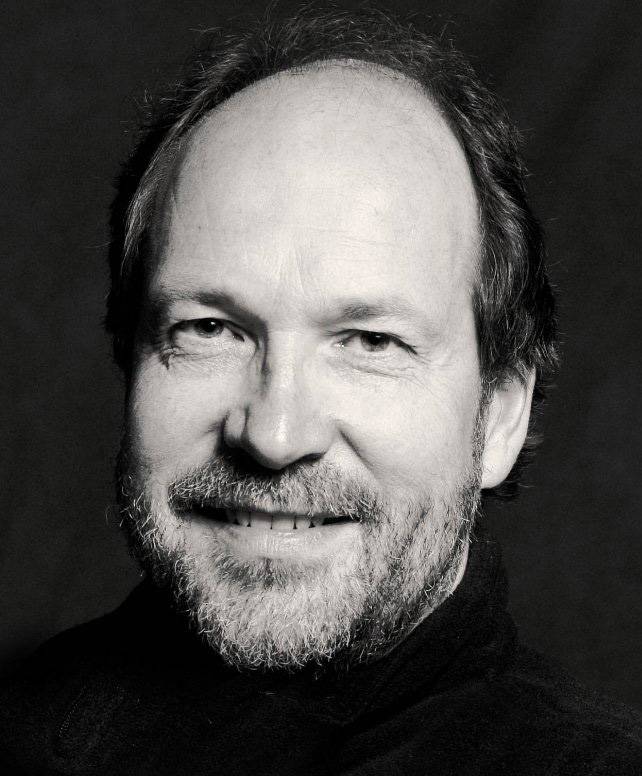 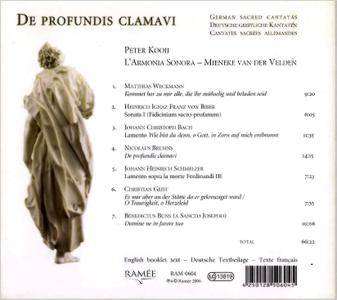 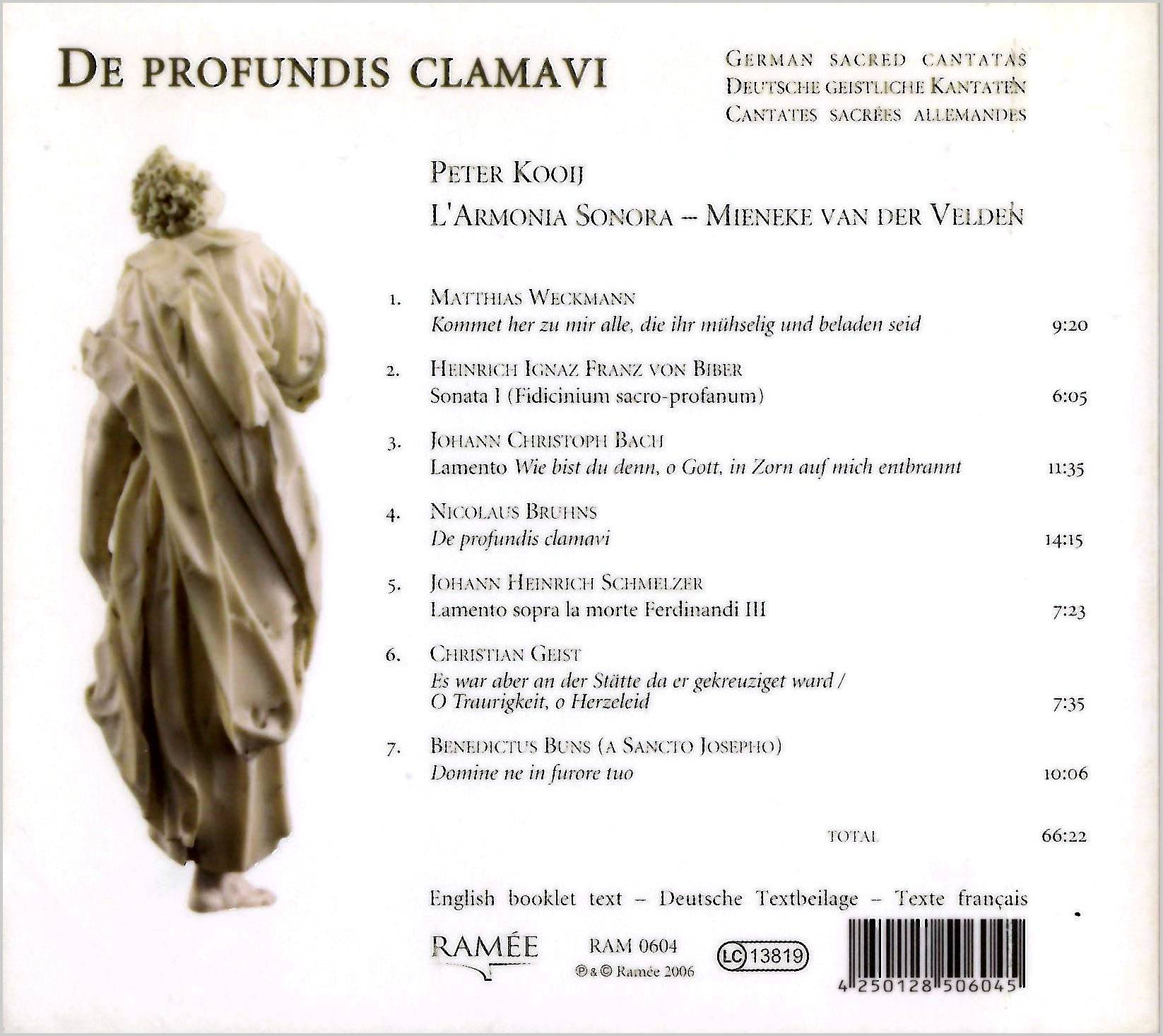