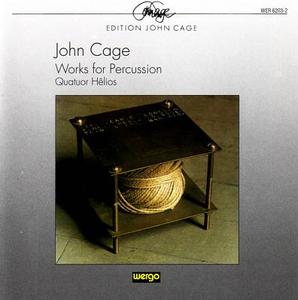 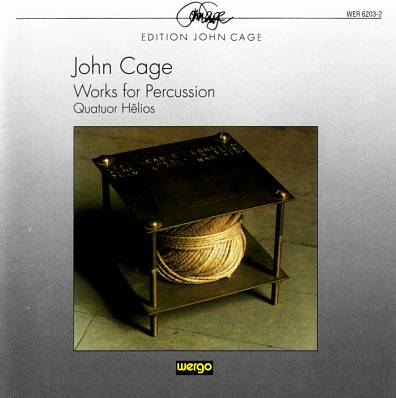 The French percussion ensemble Quatuor Hêlios has, since their inception in 1986, been dedicated to performing the early compositions of American avant-garde composer John Cage. Their 1991 release, John Cage: Works for Percussion, is a compilation of seven of compositions written by the groundbreaking composer between 1939 and 1943. Quatuor Hêlios, which takes its name from the mythical Greek sun god, performs Cage's challenging compositions presented on this CD solidly. Played by members Isabelle Berteletti, Jean-Christophe Feldhandler, Florent Haladjian, and Lê Quan Ninh, the compositions on this release reflect Cage's interest and dedication to the promotion of an often-overlooked component in traditional Western art music: rhythm. It was in 1933, after witnessing Varése's percussion composition "Ionization" (1931) being performed at the Hollywood Bowl under the direction of conductor Nicolas Slonimsky, that the 21-year-old Cage decided to dedicate himself to writing percussive compositions for such instruments as coffee cans, snare drums, lion roars, prepared pianos, and conch shells.

While living in Seattle during 1938 and 1939, Cage collaborated with the experimental dancer and choreographer Merce Cunningham, organized a percussion ensemble, and began to work as a musical accompanist for dancers at Cornish College. Since stage space was limited at the tiny Cornish, Cage came up with the idea of mimicking the timbres and sounds of his percussion ensemble by preparing a standard piano's strings with forks, springs, and other sundry miscellany. The John Cage: Works for Percussion CD contains a number of work's that utilize prepared piano: "First Construction (In Metal)," "Second Construction," "Amores," and "She Is Asleep." In 1939, Cage composed "Imaginary Landscape No. 1." This work, which is not presented by the quartet on this CD, was written for two variable-speed turntables, frequency recordings, cymbal, and piano. During the same year, the prodigious 27-year-old composer wrote "First Construction in Metal." This ten-minute work, which is the concluding cut on this CD, ebbs and flows with amazing dynamics as it makes use of a large palette of metallic objects. By 1940, Cage had moved to San Francisco where he wrote this CD's first track, "Second Construction.." This work moves in and out of changing time signatures, prepared piano ostinatos, tom-tom melodies, and brake drum bells lines. The composition "Double Music," which is the fourth of Cage's works presented on this CD, is actually a collaboration with another American composer, Lou Harrison. Harrison's fondness for the gamelan music of Bali and Java comes through in the complex interlocking rhythms and cyclical presentation of the various gongs on this cut.

As a member of the avant-garde, Cage is remembered alongside of such visionaries as Boulez, Berio, Stockhausen, Kagel, Cowell, as well as Harrison, to name but a few. His contribution to the world of music is immeasurable as he helped to open the minds and ears of Western audiences to the limitless possibilities inherent in percussive compositions.