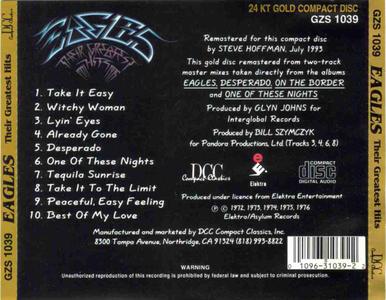 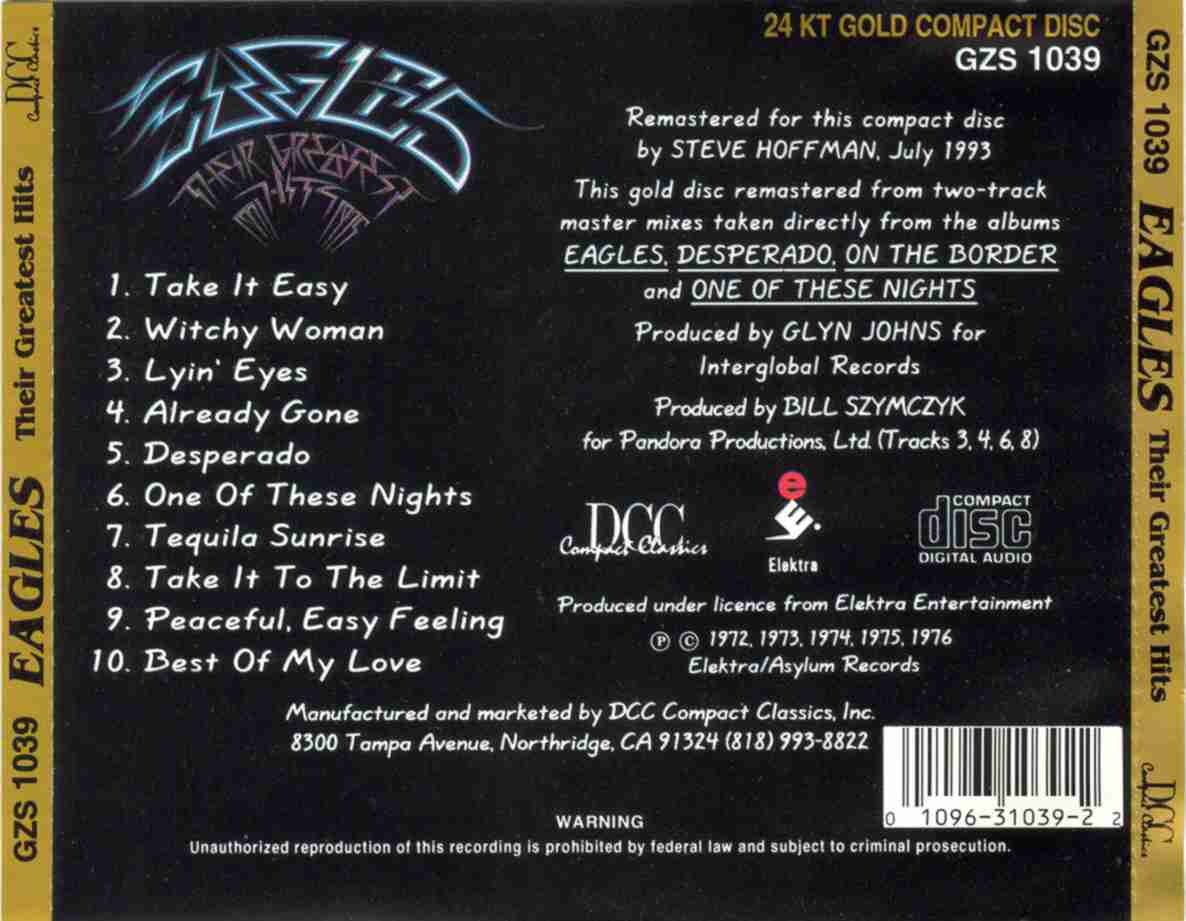 THE ARTIST
The Eagles formed in 1971 with Don Henley (drums, vocals, ex-Shiloh), Glenn Frey (guitar, vocals, ex-Longbranch Pennywhistle), Bernie Leadon (guitar, vocals, ex-Dillard And Clark and the Flying Burrito Brothers) and Randy Meisner (bass, vocals, ex-Poco). Their connections in the industry led to them being signed immediately to Asylum Records. The Eagles' self titled debut contained two Top 10 hits, "Take It Easy" and "Witchy Woman". Their second album Desperado was a critical success and contained another hit, "Tequila Sunrise", as well as the title song which became a live favorite. Additional guitarist Don Felder joined. The Eagles' success continued with On The Border, featuring the Number 1 "Best Of My Love", and One Of These Nights, with the title track being another Number 1 in addition to the hits "Lyin' Eyes" and "Take It To The Limit". Leadon left in 1975 and was replaced by ex-James Gang and successful solo artist, Joe Walsh.
The group's next album was their biggest to date. The mega successful Hotel California was Number 1 for eight weeks in 1976 and sold 9 million copies just in the first year of release. It had two Number 1 singles, the title track and "New Kid In Town'. Meisner left in 1978 and was replaced by another formed Poco member, Timothy B. Schmit. The Eagles would only release one more album though, 1979's The Long Run. It contained a slew of hits, "Heartache Tonight", "I Can't Tell You Why", "Life In The Fast Lane" and "The Long Run". After a tour, the band broke up due to continuing personality conflicts.
The members pursued solo careers but the Eagles reunited for a tour in 1994/5. It became largest-grossing ever (tied with The Rolling Stones' tour from that same year). The subsequent concert album, Hell Freezes Over, became a multi-million seller, with the hits "Get Over It" and "Love Will Keep Us Alive." Their Greatest Hits 1971-1975 is now the biggest-selling album of all time, overtaking Michael Jackson's longstanding record with Thriller, having sold over 25 million copies in the US alone.

THE ALBUM
The pre-Hotel California years were arguably the best for The Eagles (though there were, thanks to Joe Walsh, some stellar future moments). Their mix of country, folk, and rock had a harder, grittier edge, and helped define what would become known as the Southern California sound. There was just enough of a country feel in the beautiful harmonies of "Best of My Love," to blur the edges between the genres. "Take It Easy" and "Lyin' Eyes" could easily have come out of the new Nashville school, as well. The twang that characterizes the guitar intro to "Already Gone" and the leads in "Witchy Woman" and "One of These Nights," also pays tribute to country's guitar greats. Their Greatest Hits houses a scant ten singles, but not only does it illustrate the magic of the collaboration between Glen Frey and Don Henley, it shows the breadth of The Eagles impact on the many who would follow their lead. (Steve Gdula)