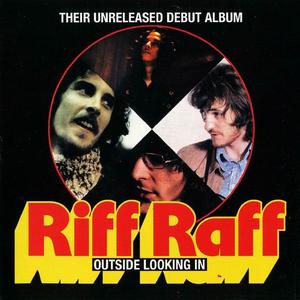 Riff Raff, co-led by Brit keyboard boss Tommy Eyre and bassist Roger Sutton, grew out of the Mark-Almond Band. Before meeting Jon Mark, Eyre had played with Joe Cocker's Grease Band. The pair decided to form solo projects while with Mark-Almond, and recruited vocalist Alan Marshall, drummer Kenny Slade, and guitarist Martin Ball. This lineup was never formalized, though they had recorded demos and even finished some tracks for a debut album for Richard Branson. The amalgam of jazz, rock, and soul was intoxicating and was a fine emotional alternative to the Canterbury bands, which were much more concerned with complexity than groove. The music included here features all seven of those original finished tracks as well as the first four recordings of the final band lineup after Marshall and Slade left.

Riff Raff (1973). British progressive rock band's folk and jazz oriented debut album little bit similar to Igginbottom's Wrench. Featuring Tommy Eyre on keyboard who has been actively involved with numerous bands including The Aynsley Dunbar Retaliation, Juicy Lucy and The Sensational Alex Harvey Band.
Original Man (1974). The second album released by Britain's Riff Raff was a further study in the textures of jazz-rock as they had been articulated not only on the band's issued debut, but also with Tommy Eyre and Pete Kirkley's stint with Mark-Almond. Here are seven rather extended forays into keyboard-drenched rock that carried a jazz sensibility in its beak and dropped it thoroughly onto blues-based progressive rock.