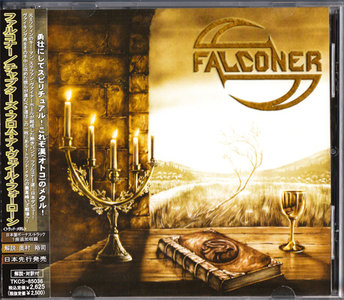 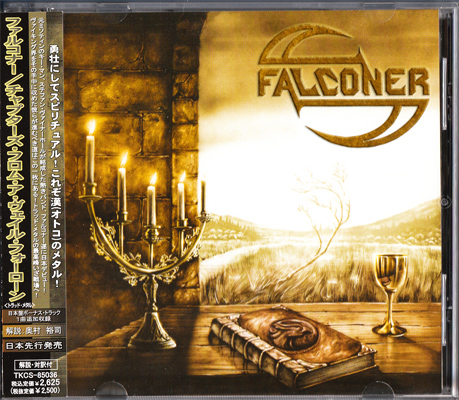 Falconer - Chapters From A Vale Forlorn

Falconer is a distinctive Swedish folk/power metal band, formed by the former guitarist of Mithotyn, Stefan Weinerhall. Falconer carry on many of the traditions set by Weinerhall's previous band and play a style of power metal that utilises folk instrumentation and melody to create a more medieval sound.

When the band Mithotyn dissolved in 1999, Stefan went on to what would later become Falconer, with the same kind of melodies and epic lyrics. But now the mind was set on a clear vocalist. After a while a demo was recorded and Mathias Blad was found to do the vocals as a session member.

This demo was sent to different labels throughout Europe and after some time there was a couple of contracts to choose between. Since the demo was recorded with a drum machine Stefan realised that he had to get a real drummer if there would be an album recording to be done in the future. Karsten Larsson (also ex-Mithotyn) was no problem to convince to join up with Falconer. Mathias was also enthusiastic to join the band on a more permanent basis since his former appearance in the band had resulted in an overwhelming response from people and finally resulted in a record deal with Metal Blade Records.

Finally in November 2000, the band entered the Los Angered Recording (now Sonic Train Studios) with Andy LaRocque and Jacob Hansen behind the knobs. It was a three-week session for one hour of music, so the schedule was pretty tight. The band was very satisfied with the result in this cosy studio outside of Gothenburg, Sweden.

The album that was entitled Falconer was released in March in Europe and May in the United States. The response to the album was better than the band had expected, it got very high ratings in most reviews. At the release of the album, the band did not have any plans whatsoever to promote it live, that's why the small line-up worked out.

With the success came the wishes from the fans to see the band on stage, thus the band gave the idea a thought. The decision was that, after the next album, they would hire some additional people to fill the line-up.

As the summer and fall went by, the band rehearsed more material for the upcoming album. The music was pretty much in the same style, but with some progress along the road. It seemed like the new album would be heavier than the first.

One year exactly after the last studio visit they returned to Los Angered. Nine tracks and one bonus track were recorded and mixed during the 24 days. The first album had lacked distribution in Japan but that problem was solved with this one. Soundholic was signed to license it and give the Japanese audience a cheaper alternative than an imported album. The new piece that's called Chapters From a Vale Forlorn was released on 7 February in Japan and on 11 March in Europe and in the US.

The band found Anders Johansson, not the Hammerfall drummer but the guitarist in Swedish band Vrävarna to handle the second guitar live and Peder Johansson to handle the bass live. The band played at Wacken, at the Rock Machina, and the Bang Your Head Festival during the summer. That was a big start for a band who hadn't played live at all before.

After this, more and more proposals and offers for live gigs and tours appeared. At this time, Falconer realized that they would have to continue to cancel tours and gigs in the future. Having seen Mathias' schedule for the next year, they realized that he would not have much time for anything else than his main occupation: theatre and musicals.

So if the rest of the band wanted to take the offers they got, they had to get a new vocalist, although they knew that much of the interest in the band was brought just because of Mathias' original voice.

In November 2002, they found Kristoffer Göbel, also the vocalist in the band Destiny. At the same time, the live musicians joined the band permanently. During the spring the band wrote and rehearsed new material.

Finally the month of May came, and during five weeks, Falconer returned to Los Angered to record The Sceptre of Deception. According to the band, the album is a mix between the two previous albums, but with some more unexpected turns in the music. This was also a concept album about a happening in their own motherland; a story of greed, betrayal, and lust for power. A lot of guest appearances were added to the album this time, too. It was released on 6 October 2003.

Following the release of the album, internal difficulties brought on by problems with scheduling rehearsals arose within the band and both Anders and Peder Johansson were removed from the line-up. They were eventually replaced with Jimmy Hedlund and Magnus Linhardt, respectively. With this new line-up in place, Falconer recorded Grime vs. Grandeur, a record that departed quite significantly from their established sound - the folk melodies, themes, and lyrics were mostly replaced with more traditional heavy metal arrangements. The album received a generally muted response from fans as the band were seen to have lost their somewhat unique identity.

[edit] Return to the roots

In November 2005, Kristoffer Göbel announced via the Falconer forum that he had been fired and it was soon confirmed that Mathias Blad had been re-hired to complete the return to the traditional Falconer sound the band was striving for. Recordings took place over the course of 2006, and a new album called Northwind was released in September of that year.

Their new effort; Among Beggars And Thieves was released in September 2008. The album is heavier than their latest work Northwind.