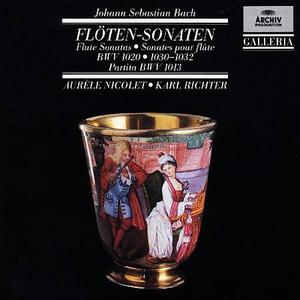 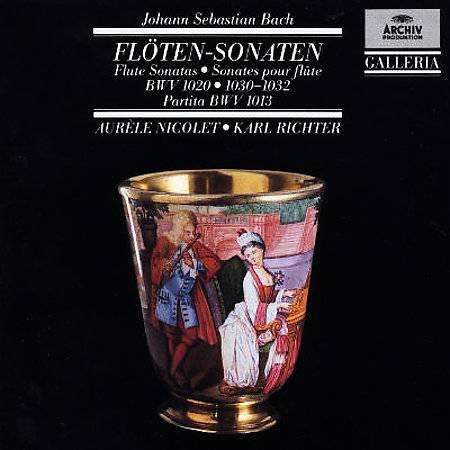 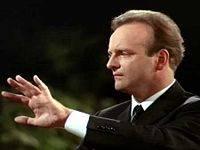 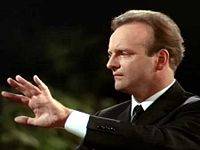 I stumbled across this CD in, of all places, a Portuguese blog owned by a "P.Q.P. Bach" who may or may not be a descendant of the great composer (Babelfish didn't make it clear to me!). There was very little accompanying documentation on his site and even the track list is wrong (there are 16, not 17, tracks). Thanks to Flush and Billeke (see below), the original CD has been identified as this one released by Deutsche Grammophon:
http://tinyurl.com/2qxze5

Sonata in G minor BWV 1020 may have been the work of Carl Phillip Emmanuel Bach and as such is often omitted from recent recordings of the J.S. Bach flute sonatas.

Comment by Daniel Chiesse Zandonade:
"Karl Richter's work is not as good as the actual ones. There is a much better recording of these sonatas performed by Trevor Pinnock."

Comment by Jan Hanford:
"Aurele Nicolet's playing is beautiful, as it is in his other recordings of these works. I don't think it's appropriate to criticise Richter's playing given the bad recording quality inflicted on the harpsichord here. There is nothing wrong with Karl Richter's playing but there is definitely something wrong with the recorded sound. The harpsichord is undermixed and sounds muffled. Although many recordings from the early 1970's sound great, this is an exception. Although it claims to be "digitally remastered" it sounds just awful. It's a shame they chose this to re-release and there are so many treasures in the Archiv Produktion catalog that have never made it to cd."

Taken from Wikipedia:
"Karl Richter (1926 – 1981) was a German conductor, organist, and harpsichordist…He conducted a wide range of music, but is best remembered today for his interpretations of Johann Sebastian Bach's music. Karl Richter avoided the fluctuations in tempo that were then characteristic of the prevailing Romantic manner of conducting Bach, but otherwise did not make use of historically authentic performance practices, using modern instruments right to the end of his career."
http://en.wikipedia.org/wiki/Karl_Richter

Thanks also to slowman, who posted Trevor Pinnock's interpretation of these sonatas here:
http://avaxhome.ws/music/classical/7877456533.html

Lovers of flute music should find it well worth comparing the two CDs. In modern performances such as Pinnock's, we hear the delicate woody tone of the baroque flute rather than the broad powerful tone of today's modern (metal) flute, nonetheless played masterfully by Nicolet, which is the centre of attention. The tempo of the historical Nicolet-Richter performance is slightly faster and much more even (see Wikipedia above). Both are beautiful in their own way.

Those flautists among you who wish to follow the score of the Partita can download all 4 movements here in PDF:
http://tinyurl.com/365qm3

2nd October 2007 - Changes to the original post:
1 - Track list corrected (16, not 17 tracks)
2 - The Amazon entry for this CD is misleading as it describes an additional "(6) Sonatas for Violin and Continuo" which are not there, so this reference has been deleted.