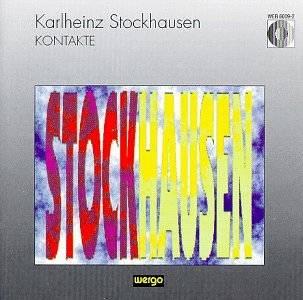 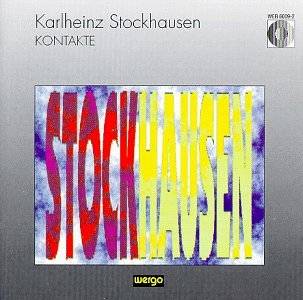 According to the composer, “In the preparatory work for my composition Kontakte, I found, for the first time, ways to bring all properties [i.e., timbre, pitch, intensity, and duration] under a single control” (Stockhausen 1962, 40), thereby realizing a longstanding goal of total serialism. The most famous moment, at the very center of the work, is a potent illustration of these connections: a high, bright, slowly wavering pitch descends in several waves, becoming louder as it gradually acquires a snarling timbre, and finally passes below the point where it can be heard any longer as a pitch. As it crosses this threshold, it becomes evident that the sound is comprised of a succession of pulses, which continue to slow until they become a steady beat. With increasing reverberation, the individual pulses become transformed into tones once again.

Kontakte exists in two versions: a four-track one for electronic sounds, of which the single or double-channel versions are particularly suitable for broadcasting or gramophone reproduction , and a second version for electronic sounds and pianoforte and percussion instruments. “Kontakte” was first performed in this version on June 11th 1960, at the 34th World Music Festival of the IGNM in Cologne with Christoph Caskel (percussion) and David Tudor (piano and percussion).